Folktales or Fairy Tales in Native Language (if any exist anywhere)

Wondering what the languages are where there do exist resources of folktales / fairy tales written down in the native language. I think I may have found some in Celtic here, such as this: 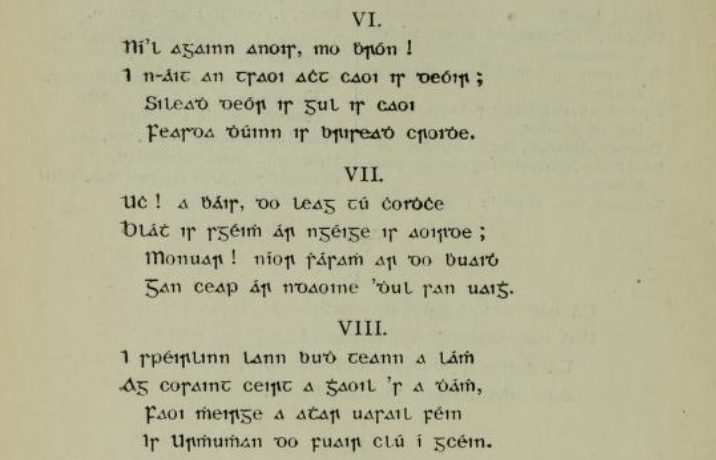 I am not sure what it says, but it is at least something in the native language, and it looks like a poem of some sort.

I'm wondering where there exist collections, lists, or other organized groupings of texts in native languages, and what the native languages are. I am pretty sure nothing like this exists for any Native American group (though if one does I would love to know). I also don't think any exist for Papua New Guinea groups or African tribes. But some may exist for larger African groups like countries. Some may exist for Japanese or Chinese. Some may exist for other European groups. Basically wondering what records have been saved somewhere. Then once I know that I can at least narrow down my search to find examples of the text.

So the main question is:

The languages that have preserved fairytales or folktales somewhere online or offline.

The secondary question which would be nice to know but is probably a lot of extra work and so isn't necessary is:

Where the links are to each of these places (libraries for physical books, or otherwise online).

Just knowing what is available will make it easier to know where to look for stuff.

All in the original language, not English.

There are many Chinese folk tales that have been preserved in their original Literary or Classical Chinese form, as early as from the Han dynasty. In fact, they have recently been compiled into 23 volumes. Many are still extremely popular and have been televised. Probably the most popular is Wu-Cheng-En's Journey To The West. Most of these original texts are accessible. For example, here is the original transcribed text of Journey To The West.

Since you asked for fairy tales as well, the Chinese Fairy Book may be of interest to you.

In addition, many folk stories have been preserved as part of the Taoist and Buddhist canons in Literary and Classical Chinese. The Chinese Ch'an and Japanese Zen traditions are rich in short folk tales used as meditation topics, for example Hakujo's Fox.

Not the answer you're looking for? Browse other questions tagged folklore fairy-tales or ask your own question.

4
What's the best way to go about researching obscure mythologies?
1
Any ancient myths/folklore/tales/etc. about extraterrestrial voyages/beings/people or even about voyages towards earth?
9
Original Celtic, Old English, Old Norse, or Gothic Texts Online
3
Way to measure the probability a story evolving in a given culture
2
What's the secret behind the infamous 'Backrooms' creepypasta?