Did ancient Egypt use the abbreviation IHS for "Isis, Horus, and Seb"?

The Chick Publications tract "Are Roman Catholics Christians?" has all sorts of questionable content (including many fundamental misunderstandings of Roman Catholicism), but there is one historical claim that I was unsure of. When talking about the letters IHS on the Eucharist, they imply that it stands for the letters of three Egyptian gods.*

In Egypt, the "IHS" stood for their gods…Isis, Horus, Seb.

Their citation for this is The Two Babylons, a book published by their organization, so I'm a little skeptical of the source.

Did ancient Egypt use this abbreviation for the names of their gods?

* See What does IHS stand for on the Eucharist? on Christianity Stack Exchange for what it actually stands for.

Long answer: Each time you see pseudoscience coming and pointing its dirty nose on any subject... Feel free to think smelly things are in the air. First, that a trilogy of gods would refer to Isis, Horus and Set. But anyway.

The first thing to notice is the use of the GREEK names of the EGYPTIAN gods. Because Isis is Aset in Egyptian. Horus is Hor. Set is Set, but his hieroglyphic name came with lots of variations. So ranking something Egyptian when using Greek names is evil at best. But rest assured that the one writing those stupidities probably ignored the fact Isis and Horus are Greek names...

I just would like also to mention that Egyptian did not use a true alphabet but a specific system made of an alphabet, bilateral, trilateral and ideograms. 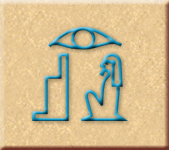 As a side note the eye is a bilateral read as jr (or ir if you use the American system, jr is the much international European system), not an ideaogram, just 2 sounds.

the kind of demi circle is read 't', and is an unilateral. Not truly speaking a letter as in an alphabet, but quite close. Horus is written with a falcon. So how would Egyptians have used "h" for something they were writing as "falcon"?

Notice here I spared you the vast discussion on how Osiris was pronounced, for example.

There are trinities in Egypt. The best known is Osiris (Asir in Egyptian), Isis (Aset), and Horus (Hor), respectively Husband, wife, and son. Which is telling you something here about Egyptian culture. They revered procreation. No virgin Mary. No immaculate conception. Fact is virginity was not well regarded. Generally speaking in the antique world, one has to face sexuality plain and blank (reading some 18xx translations of some Egyptian tales is totally priceless).

Now while there are trinities (especially the god trio, quite revered in New Kingdom, but Hathor, Sekhmet and Bastet is another popular one, in Thebes it was Amun (husband), Mut (wife), Khonsu (son); in Memphis Ptah (husband), Sekhmet (wife), Nefertem (son)), Egyptians used 2 other conglomerates of gods, the Ogdoad (8 gods) and the Ennead (9 gods). Basically, while religion in Egypt is relatively stable, there are variations between north and south, and during time.

Let's put it blankly: Set is not an admirable God. He factually killed Osiris. And something you have to know is that it was a secret, this murder, something taboo. Herodotus mentioned it and talked about a secret that could not be revealed. Later Plutarque wrote the whole story, Plutarque not being a great fan of foreign civilizations.

Not only did Set murder and quarter Osiris, but he fought his nephew, Horus, and it was certainly not a gentle little fight. Set and Horus are enemies. Mortal ones.

As the opener made me noticed, the god Geb could be a solution. Let's examine. It is unlikely in modern literature to find Geb as Seb, but not in the old one. Champollion noted that in his "Précis du système hiéroglyphique des anciens Égyptiens": Cb ou Cyb (copte): le dieu Sèb ou Scheb divinité egyptienne (The god Seb or Scheb, Egyptian divinity). (Notice in French "ce" and "cy" are easily read "see" or "say" hence Champollion's way of writing). And this is a trend we find in all the 1800 era.

Here is another example, by Peter Le-Page Renouf, from 1885: The Egyptian word seb, or rather sbu, had from the earliest time different meanings. The identification of Seb with the earth is recognized in the Ritual of the Pyramids. But the word is also the name of a goose on pictures on the same period.

Here is his hieroglyphics name

which is read Gb-b ( the repetition of the b is to help the reading of the bilateral, it should not be pronounced)

Now let's take a look at Geb. Geb is an Earth god, member of the Ennead. His consort is Nut, the sky goddess, and their usual children include Isis, Osiris, Set, and Nephtis.

In certain traditions, he is the father of Horus the Elder (Haroeris), which also indicates that Isis is Horus's sister, and Horus's mother is Nut. In that case Horus form a triad with the Goddess Tasenetnofret (his wife) and Panebtawi (their son). In the pyramid text Horus the Elder is the son of Ra. You can notice once again a general trend in Egyptian trinities: Father, mother, son...