What was the parentage of the Korean King Suro?

According to Korean myth, King Suro of Geumgwan Gaya was one of six eggs that descended from heaven.

Does he have any parentage other then that? Any details about who laid the eggs? Or any other accounts of parentage?

And why on this website are his parents listed as Jeonggyeon Moju and Lee Biga? And who are they?

Regarding the Sansin Jeonggyeon Moju I found this depiction of her which is located in Simwonsa Temple in Gayasan National Park just outside Seongju, Gyeongsangbuk-do. 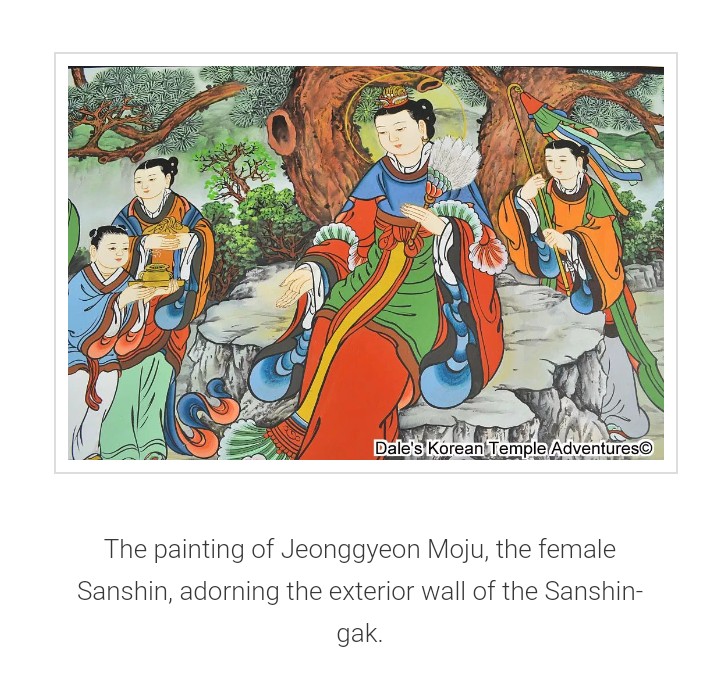 It gives no information about her except that she is a "female Mountain Spirit ... that occupies Mt. Gayasan."

Are there any more information about her and Lee Biga and any account of their parenting King Suro?

There are two separate, somewhat incomptaible traditions regarding King Suro.

The first origin story comes from a now-lost work, but is quoted in the Samguk Yusa 삼국유사 (三國遺事) by the 13th century monk Iryeon. This states that a purple rope was spotted hanging from heaven; beneath the rope was a golden box wrapped in red cloth; and inside there were six golden "eggs" that are as round like the sun. Apparently, the next day these eggs "turned" into six boys.

There is no indication of human-like parentage in this origin story - he is simply descended from heaven.

The second parentage comes from the Chosŏn era geography book Sinjeung Donggukyeojiseungram 신증동국여지승람 (東國輿地勝覽). This text names Jeonggyeon Moju the mountain goddess of Mt Gaya, located in the region of the Gaya Confederacy. Traditions has it that, while bathing in a pond, she attracted a divine voyeur: Ibiga, "a heavenly god".

When she opened her eyes, Chonggyon saw the round shadow of the sun falling on the surface of the pond still like a mirror. Something sparkled momentarily. She suddenly felt ashamed. The moment she raised her head and looked up into the sky, her eyes met with the burning eyes of someone along with the sunlinght. At that instant, she cried, "Ah!" and felt the burning sttream of someone's vision penetrating her body. The burning light was none other than that of the sun. Although she tried to hdie her body with her hands in a hurry, it was too late. To be sure, she had already looked Ibiga straight in the face.

And that apparently was enough to get her pregnant. Jeonggyeon Moju is said to have given birth to two boys: 惱室朱日 and 惱窒靑裔. The former is identified as an alternative name for Ijinashi, the founding king of Daegaya, lit. Great Gaya; the latter is said to be King Suro.

Not much else is known about the goddess. However, given her province, it is inferred that she was a kind of patron deity to the people who later made up the Gaya Confederacy. To this day, the Sanshingak shrine on the mountain performs rites every October, praying to her for national prosperity.

7
What was the earliest werewolf myth?
7
Who was the goddess, pregnant with Zeus' child or children, who was denied sanctuary?
5
Benevolent king gives greatest gift: yourself/himself
2
Why was Tenes made king?
10
Did Korean Queen Heo Hwang-ok Exist and was she Indo-Aryan or Tamil?
3
What species of tree is meant in the Dangun myth of Korea?