Was there any figure considered to be evil in iron age Celtic paganism religion of England?

Before Christianization the Celts of England had a pagan religion. Was there any figure in that religion which was considered to be evil?

Keep in mind that we're reaching deep behind the shrouds of history. Little is known for certain of religious practices this far back; thus, a great deal of speculation and reconstruction is necessary on this topic.

One possibility is Annis. Also known as Anu or Danu, or Dana. She was a Celtic deity that some writers contend was a malevolent mother goddess who devoured children, or to whom children were once sacrificed. The only recorded instance of this goddess which survives is found in Ireland; however, some have identified the "Gentle Annie" (so named not because she is gentle, but rather to avoid offence) or Annis found in Britain to be the same deity.

["Gentle Annie"] may be the same old deity as Black Annis of Leicestershire and Anu of Ireland, whose name lingers in the place name, the Paps of Anu, a mountain group in County Kerry.

Toponyms suggests support for this interpertation: the Dane Hills to the west of Leicestershire in England is argued to have been named after Danu. In fact, a figure known as Black Annis survives to this day in English folklore, as an old hag who eats children - she is said to live in a cave in Dane Hills.

On Easter Monday it was the custom from early times to hold a drag hunt from Annis' Bower to the Mayor of Leicester's house. The bait dragged was a dead cat drenched in aniseed. Black Annis and Gentle Annie are supposed to derive from Anu, or Dana, a Celtic mother goddess.

Thus, it has been suggested that Black Annis emerged from the popular memory of sacrifices to the ancient, prehistoric malevolent deity.

The Celtic mother-goddess - represented among others by Anu or Danu, the Morrighan, and the quasi-historical Medhbh - was goddess both of sexuality and of war. Her terrifying aspect seems to have led to her becoming in later lore a hag - for example the Blue Hag of the Highlands, the Cailleach Bheur, whom Black Annis with her livid face resembles. That such Celtic mother-goddesses were once worshipped in this area is attested by what seems to be a carving of a fertility goddess standing just outside Braunston Church.

Another possible example is Adder, which may have received an evil reputation due to being the only poisonous snake in Britain. According to The Encyclopedia of Celtic Mythology and Folklore, the Adder:

. . . was given special mythological consideration as the island's only poisonous native snake. It was said to be a wise creature but very wily. In the Scottish Highlands the adder was associated with the weather-controlling hag, the Cailleach.

Evil serpent deity. The sly and crafty adder is thought by some to be an aspect of Eris, the goddess of strife . . . An adder is said to have caused the battle of Camlan (between Arthur and Mordred) and is also said to be the source of power of the ancient goddess Cailleach Bheur.

Your question is difficult to answer definitely because of several factors: what we know about the concepts and beliefs of iron age Europe is a patchwork of evidence, archaeology, contemporary descriptions by other cultures and pure, albeit educated, guesswork. Academia abounds with arguments for and against the reality of the "Celt" as a loose term for a period of technological and cultural change, a coherent cultural group or an ethnicity. And even were we able to make statements about any of these things, the concept of Evil then and now is so radically different it adds a whole other layer of problems.

Also there was not so much "a religion" as a syncretic development of belief, changing from period to period and adapting to new influences.

A lot of the entries given above by Semaphore rely on the designation of entities as "evil" in modern folklore not as evil in Iron Age Britain. Anu for example is most certainly not evil in Irish folklore and more importantly, in the Irish sagas and literature. Rarely are any gods or heroic figures depicted as fully good or fully evil. They are more to be viewed as Nature herself: both beneficial and harmful. Even the story of Chrom Dubh (a dark entity supposedly vanquished by Patrick) relies on christian sources who conflate him with the devil, and cannot be relied upon for any insight into what actual Iron age peoples thought.

The same is true for Britain, there is such a gap in philosophy between that period and now it would be very difficult to do more than loosely interpret later sources and hope for the best. Just bear in mind almost everything you read will be taken from at best early medieval sources. Harding's death and burial in Iron age Britain might be of some help to you in background and belief structures. Celtic Mythology sources can be found online on https://celt.ucc.ie// - mainly Irish but again you might find some inspiration in them.

There's maybe one source from all of the surviving literature that may express a pre-Christian British myth with an 'evil' deity, from Plutarch's De Defectu Oraculorum, Vol V:

18 1 Demetrius said that among the islands lying near Britain were many isolated, having few or no inhabitants, some of which bore the names of divinities or heroes. He himself, by the emperor's order, had made a voyage for inquiry and observation to the nearest of these islands which had only a few inhabitants, holy men who were all held inviolate by the Britons. Shortly after his arrival there occurred a great tumult in the air and many portents; Fviolent winds suddenly swept down and lightning-flashes darted to earth. When these abated, the people of the island said that the passing of someone of the mightier souls had befallen. "For," said they, "as a lamp when it is being lighted has no terrors, but when it goes out is distressing to many, so the great souls have a kindling into life that is gentle and inoffensive, but their passing and dissolution often, as at the present moment, fosters tempests and storms, and often infects the air with pestilential properties." Moreover, they said that in this part of the world there is one island where Cronus is confined, guarded while he sleeps by Briareus; for his sleep has been devised as a bondage for him, and round about him are many demigods as attendants and servants.

This statement needs a fair amount of picking apart, for instance, this must all be very heavily paraphrased and Hellenised, obviously there was no myth of Cronus or Briareus in Britain, but whatever Gods Demetrius learned of must have been sufficiently similar to the pair that he was able to explain the myth to Plutarch in these terms.

I think Cronus at least and maybe Briareus could fulfil the modern idea of being 'evil', so it stands to reason whatever deity was being referenced here likely does as well.

As for the historicity of this text, we have some decent evidence; for one Demetrius (a grammarian) appears to have gone to Britain as part of Agricola's campaign of Romanisation in Britain as per Tacitus' The Life of Gnaeus Iulius Agricola:

21 He likewise provided a liberal education for the sons of the chiefs, and showed such a preference for the natural powers of the Britons over the industry of the Gauls that they who lately disdained the tongue of Rome now coveted its eloquence. Hence, too, a liking sprang up for our style of dress, and the “toga” became fashionable. Step by step they were led to things which dispose to vice, the lounge, the bath, the elegant banquet. All this in their ignorance they called civilisation, when it was but a part of their servitude.

As well as that we actually may have an inscription made by Demetrius himself. In 1840 a bronze plate was found in York with the following inscription:

The two Deities a Greek man would be making an offering two in return for a safe voyage home.

None the ess, take this all with a very skeptical mind. 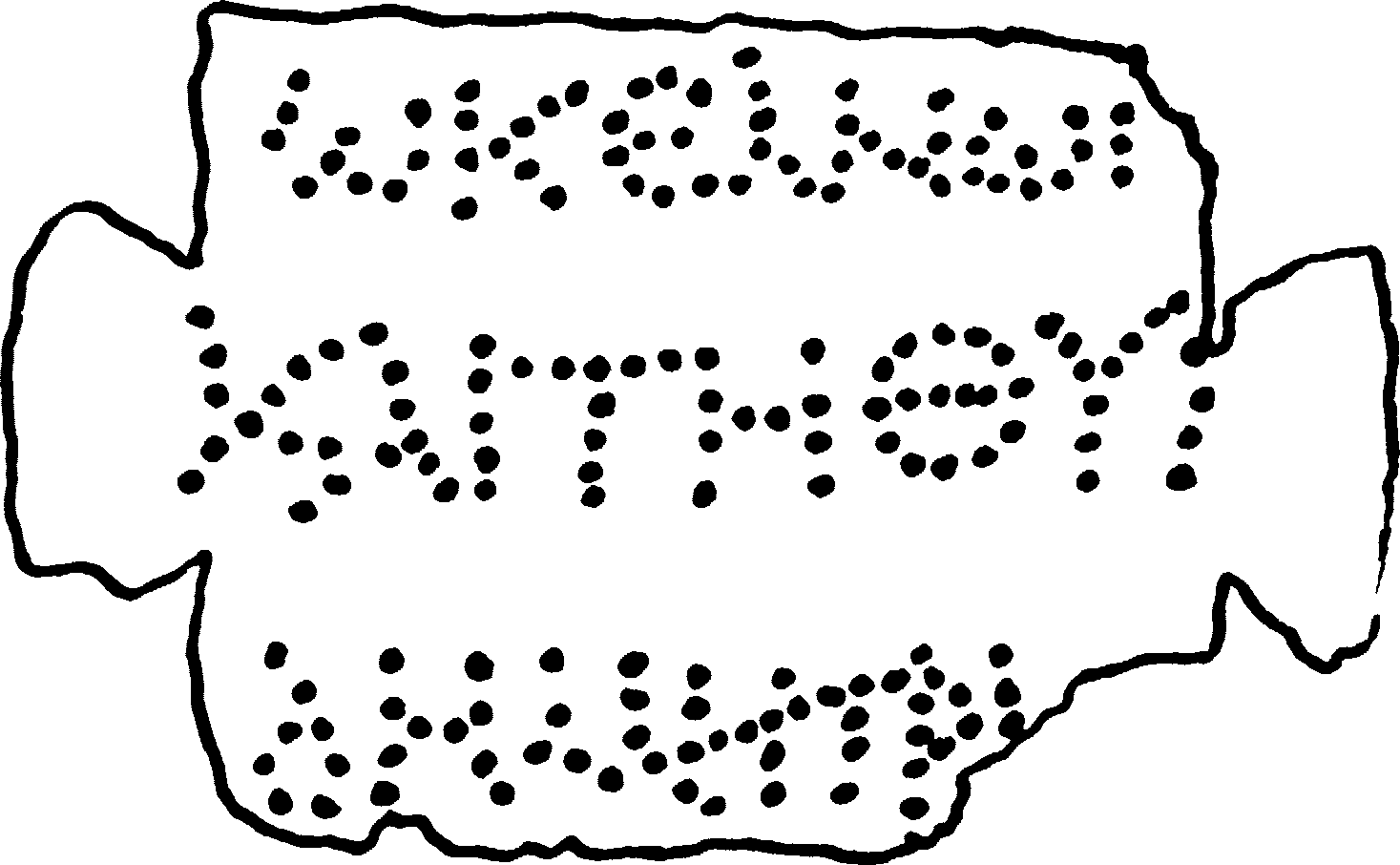 We can't really pinpoint what island Demetrius met these Holy men, but it must of been south of Lothian as Plutarch puts their dinner together at 83/84 AD and Agricola's campaign was in East Scotland by 83 AD.

Painting by Peter Paul Rubens of Cronus devouring one of his children.

Not the answer you're looking for? Browse other questions tagged celtic british or ask your own question.

9
Does anything in the Matter of Britain ever explain or otherwise address Stonehenge?
14
Did the Gauls have a magic potion that made them strong?
10
Symbolism of three characters leading Mayday ritual in The Wicker Man
14
Are there any relations between Norse elves and Celtic fairies, or their home realms?
10
What reason, if any, is there for the exact number of men and women who went with Cesair to Ireland in the Lebor Gabála Érenn?
9
Arthurian legend English and French sources
2
Is there any mention of human sacrifice in the mythologies of Britain of the period before advent of Christianity?
4
Sheep that speaks the day of your death