God/Goddess of clones or duplicates

Is there any god/goddess who had the power of clones or represented them? Like Dionysus is a god of wine and many other related things, is there a god of clones/duplicates/mirror images across any mythology? Even a monster or creature is ok.

To answer your question if there is a god specifically for clones, the answer would be no.

Although some creatures and deities have the power to clone themselves a specific god for cloning does not exist. If you where to search for a duplicitous deity of creature the list would be substantially bigger.

The closest answer to be found is the Hindu RaktabÄ«ja

In Hindu mythology, RaktabÄ«ja was an Asura (loosely translated as demon) who fought with Shumbha and Nishumbha against Goddess Durga and Goddess Kali or Goddess Chamunda. RaktabÄ«ja had a boon that whenever a drop of his blood fell on the ground, a duplicate RaktabÄ«ja would be born at that spot (rakta=blood, bÄ«ja=seed; " He for whom each drop of blood is a seed"). According to some sources, Raktabija was, in his previous birth, Rambhasura, king of demons and the father of Mahishasura.

The eighth chapter of the Devi Mahatmya, RaktabIja-vadh, focuses on Ambika's battle with RaktabÄ«ja as part of her battle against the Asuras Shumbha and Nishumbha, who had disenfranchised the gods from heaven. RaktabÄ«ja was wounded, but drops of blood falling on the ground created innumerable other RaktabÄ«jas, and Ambika and the Matrikas were in difficulty.

At this point, the Goddess Kali joined the battle, who stretched her tongue over the earth and licked up each drop of blood pouring from RaktabÄ«ja's body while other goddesses wounded him. Kali devoured his duplicates into her gaping mouth. This form who drank the demon's blood is also called Raktheshwari.

Illustrated below is the Goddess Ambika Leading the Eight Mother Goddesses in Battle Against the Demon Raktabija. Notice Kali using her tongue to collect the dead duplicates of Raktabija while more are coming from the right. 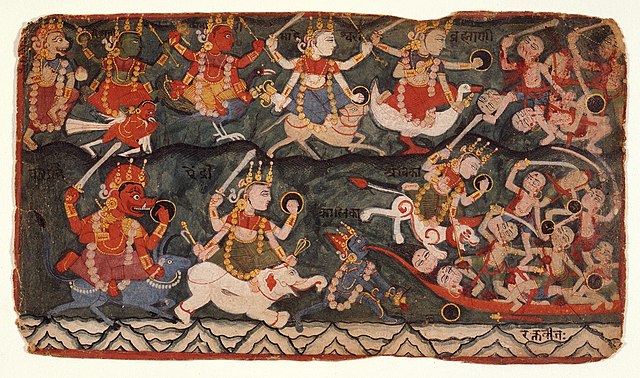 Not the answer you're looking for? Browse other questions tagged myth-identification mythical-creatures or ask your own question.

2
Were there any mythological beings which could duplicate themselves?

15
Are there any other gods that permanently had an eye removed, other than Odin?
22
Prevalence of Underwater Panther
12
Are there any gods who are in a different species than humans?
17
Mythologies with goddesses as the main deity?
11
What's the earliest recorded story of a human woman giving birth to a monster?
2
Are there any myths of little girls with the head of a wolf?
15
Pre-Tolkien Orcs in myths or folklore?
2
A unified understanding and description of a "spirit"?
4
How crazy are the Maenads from Greek Mythology?
6
Are there any older cases of exorcism in other mythology than the Abrahamic religions?