In the eddic poem Vǫlundarkviða, Vǫlundr escapes from his island flying. Some say he escaped by magic or even with a flying machine, since he was very skillful at building stuff. How can one understand both ideas using the original resource?

Vǫlundarkviða is Eddic poetry, and as such, best enjoyed if you already know the basic story and are able fill in details of the story yourself while focusing more on the poetry.

The poem does not seem to explicitly say how Völund was able to fly to his escape, it is just something he suddenly does. To find how, we need to look at other retellings, keeping in mind that they might not match up with the poets vision in regards to all details.

We have a retelling of his story in prose, in the form of Velents þáttr smiðs ("The short story of Völund the Smith"), which seem to match up rather well to the poem: Völund's brother Egill turns up to play a role. After some shenanigans with shooting apples of his son's head, Egill collected feathers for Völund, who used them to fashion something that allowed him to fly.

Now we come to the exact nature of the flight: The word used in the þáttr for Völund's contraption is "fjaðrhamr". A "hamr" is the shape and abilities of something: Freya is known to possess a hamr that could turn the wearer into a falcon. It would thus seem that Völund made some sort of dress that allowed him to fly as a bird. This is also confirmed by one of the picture stones of Ardre, where we can see Völund's smithy, Nidud's dead sons, and a shape that is likely Völund flying away: 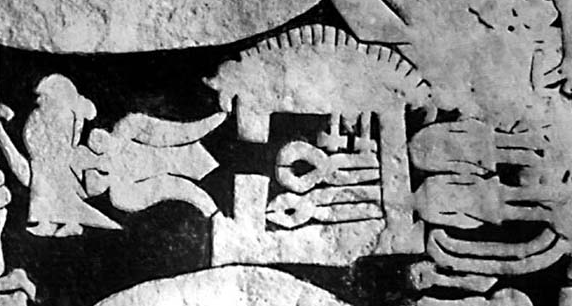 Not the answer you're looking for? Browse other questions tagged norse or ask your own question.

32
What is the difference between giants, Jotuns and trolls in Norse mythology?
10
How did the Norse ship burial ritual originate from?
6
How did Sindri and Brokkr win the bet with Loki, when Mjölnir is clearly faulty?
10
Did Huginn and Muninn have personalities?
7
How did the animosity between Loki and Heimdal start?
2
Why did Freyja have first pick?
11
How did dragons get their wings?
6
How did the Old Norse conceptualize the parts of the self? Are these translations accurate?
3
How many different shapes do jötnar come in?
0
How was the Old Norse Edda likely formatted?