What is that on Athena's chest? 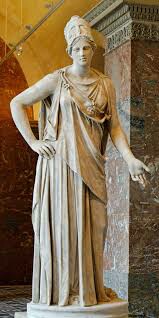 In this statue there is something what looks like a face on Athena's chest. I have seen it on some other statues of Athena. What is it? Is there a myth behind it?

It's not clear from your picture, but the face is most probably a Gorgoneion, a recurring element of Athena's iconography:

In Ancient Greece, the Gorgoneion (Greek: Γοργόνειον) was a special apotropaic amulet showing the Gorgon head, used most famously by the Olympian deities Athena and Zeus: both are said to have worn the gorgoneion as a protective pendant. It was assumed, among other godlike attributes, as a royal aegis to imply divine birth or protection, by rulers of the Hellenistic age, as shown, for instance, on the Alexander Mosaic and the Gonzaga Cameo.

The ever-so-helpful theoi.com has tons of information on the mythology of the Gorgons, if you wish to know more about them. We also happen to host some very interesting questions about Medusa and her sisters on this site.

Not the answer you're looking for? Browse other questions tagged greek myth-identification athena goddesses maiden-goddesses or ask your own question.

36
What is the earliest known dragon myth?
6
Mythological figures "with" REAL(?) amputation-like or paralysis features
7
Who was the man whom Athena gave the gift of prophecy, and from whom did Athena learn it from?
7
What was Athena's punishment for her involvement in a plot against Zeus?
11
Metis' unborn son
6
Is it possible to build a timeline for Greek mythology?
4
Why was the Greek deity of warfare and wisdom (Athena) female, and how did the Greeks rationalize this?
4
Putting aside their ability to shapeshift, were the Greek gods especially large compared to humans?
3
Did ancient Greek authors describe any consistent details of the Olympians' appearance (hair/eye color, relative height, etc)?
0
What is special about children of Athena?