Who was Zeus' first child conceived with a mortal?

Zeus was well known for his sexual escapades (both willing or unwilling).

These resulted in many divine (Gods,Olympians) and heroic offspring (demi-gods)

My question is : Who was Zeus' first child conceived with a mortal?

Argos (and his brother Pelasgos)

According to Apollodorus, Hyginus, and Diodorus Siculus, the first mortal consort of Zeus was a princess named Niobe, daughter of Phoroneus. (This Niobe is not to be confused with the more famous tragic one who was the daughter of the Lydian king Tantalos [Tantalus]. The Lydian Niobe lived about eight generations after the one in question here.)

Long ago the city of Argos had a different name. It had been founded in prehistoric times by the god Inakhos [Inachus], one of the thousands of sons of the Titan Okeanos [Oceanus]. These sons were the rivers of the world, and Inakhos founded a city upon his own body, the River Inakhos, and named the city Inakhos, after himself, also installing himself as its first king and priest.

Inakhos married his own sister Melia, and together they had a son named Phoroneus, who, when he had grown up, Inakhos placed upon the throne in his own stead. Phoroneus renamed the city Phoroneia, after himself. After the Flood in which Zeus sought to destroy humankind, Phoroneus is credited with discovering fire, teaching people to live in cities again and being the first to offer sacrifices to Hera in his city. This Flood, however, would only come in the time of his great-grandchildren, into which time he was still an active leader. More on that below.

Phoroneus had several children, including a son named Apis and a daughter called Niobe. The city of Phoroneia was located on the vast peninsula of southern Greece, and Phoroneus placed this whole peninsula under the rule of Apis, who named the land Apia after himself. Centuries later it was renamed Peloponnesos (by Pelops son of Tantalos, and therefore brother of that other Niobe.)

Meanwhile Apis's sister Niobe became the first mortal woman to be bedded by Zeus, and they had at least one son, called Argos [Latinised as Argus]. After Apis died Argos became king of Apia, which he renamed Argos after himself. Argos then became the name of both the entire peninsula as well as of the city of Argos which previously was Phoroneia, and prior to that, Inakhos. While the peninsula was later renamed Peloponnesos (when Pelops conquered it), Argos remains the name of the city to this day. 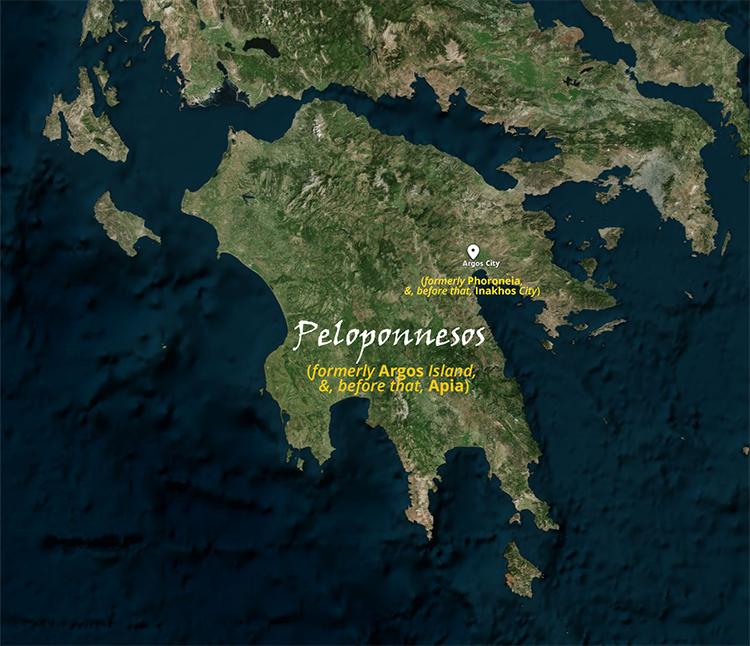 Zeus and Niobe also had another son, named Pelasgos [Pelasgus]. Argos features way more prominently in connection with their ancestral city so perhaps he was older but we are otherwise not furnished with such information. They could also have been twins. At any rate Pelasgos is alternately said to have been an Autokhthon (born directly out of the Earth).

He was the first king of Pelasgia, the extensive central region of the Apia/Argos/Peloponnesos peninsula, which, true to family tradition, he had named after himself. He was the father of the notoriously impious Lykaon [Lycaon], whom Zeus turned into a wolf. Zeus also consorted with Lykaon's daughter Kallisto ([Callisto] who was therefore Zeus's own great-granddaughter). It was during Lykaon's reign over Pelasgia that Zeus flooded the Earth, and afterwards Arkas [Arcas], the son of Zeus and Kallisto, became king of Pelasgia, which he renamed Arkadia [Arcadia].

Like his grandfather Phoroneus, Pelasgos was renowned for early innovations for basic living, inventing the first huts for shelter from the elements, as well as sheepskin garments the style of which the poor in Euboia [Euboea] and Phokis [Phocis] would later still be wearing. He discovered edible acorns, and he taught people to abstain from green leaves, grasses and roots that were not good to eat, particularly the fatally poisonous ones.

In the first two sections of Bibliotheka [Library] 2.1, Apollodorus says that:

Argos was the son of Niobe and Zeus (she was the first mortal woman with whom he had intercourse). According to Akousilaos, Pelasgos was also their son, and the inhabitants of Peloponnesos were called Pelasgoi [Pelasgians] after him. But Hesiod says that Pelasgos was an Autokhthon ["a son of the soil"]...

Argos received the kingdom and called Peloponnesos after himself Argos; and having married Evadne, daughter of Strymon and Neaira, he begat Ekbasos, Peiras, Epidauros, and Kriasos, the last one of these being the successor to the kingdom.

Hyginus, writing in Latin, uses the Roman names of the gods and other characters, saying, in Fabulae 145:

From Phoroneus and Cinna were born Apis and Niobe. The latter was the first mortal to be embraced by Jupiter [Zeus]. She gave birth to Argus, who gave his name to the city of Argos. Argus and Evadne had three children: Criasus, Piranthus and Ecbasus.

Diodorus Siculus tells us that the last mortal woman with whom Zeus consorted was Alkmene [Alcmene], upon whom he sired the great hero Herakles [Heracles]. He notes the phenomenon that Alkmene was herself a descendant of Niobe in his Bibliotheka Historika [Library of History] 4.14.4.

The first mortal woman... with whom Zeus lay was Niobe, the daughter of Phoroneus, and the last was Alkmene, who, as mythographers state in their genealogies, was the sixteenth lineal descendant from Niobe. It appears, then, that Zeus began to beget human beings with the ancestors of this Alkmene and ceased with her; that is, he stopped with her his intercourse with mortal women, since he had no hope that he would beget in after times one who would be worthy of his former children and was unwilling to have the better followed by the worse.

Nearly a thousand years after the time Alkmene would have lived, however, there was quite a bit of propaganda promoting the notion that Alexandros III of Makedonia, better known in English as Alexander the Great, was the son of Zeus by a mortal queen.

I am unable to figure out where Diodorus's "mythographers" get their sixteen generations between Niobe and Alkmene. There is indeed a version of her genealogy in which Alkmene is descended from Niobe, through Mantineus son of Lykaon, son of Pelasgos, but, by my count, this gives us only up to ten generations between them, with twelve if we added both Niobe and Alkmene themselves to the number.

Phoroneus had a sister named Io, by whom Zeus had a son Epaphos [Epaphus], who grew up to become king of Egypt. He was also an ancestor of Alkmene and Herakles. Even if we were to count "indirect descent" from Niobe to Alkmene through Epaphos, since he was Niobe's cousin, we still get only up to something like thirteen or fourteen generations at absolute maximum.

The reason is that he is a contemporary of Theseus' father, King Aegeus, and Theseus was in the first generation of heroes, which includes Herakles, who predate the heroes of the Trojan war.

Minos, along with Rhadamanthus and Sarpedon, is a child of Europa, a Phoenician princess and great, great granddaughter of Io.

Problems with this Theory: Sarpendon fought at Troy, and although time doesn't have to make strict sense in Greek mythology, the genealogy mentioned by Adrinka suggests Argus, founder of Argos, was earlier.

Not the answer you're looking for? Browse other questions tagged greek zeus demi-gods or ask your own question.

32
Why did Zeus assume so many different forms for seduction?
22
What did Danae want?
14
Was Zeus a compilation of gods?
24
Why was Medusa the only mortal of the Gorgons?
4
How could Heracles ensure the victory of the Olympians against the Titans if he was born mortal?
11
What treasure was made by famous mortal men, who we know by name, in Greek mythology?
6
When was a pair of Greek and Roman gods first identified?
8
What do we know of the rebellion against Zeus by Poseidon, Hera and Athena?