Do Modern Cults Create Their own Myths?

I would define a "modern" cult as being in the age of the internet. This is fair to me; a cult relies upon spreading its message and the internet has changed that. So the earliest cults were in the 1990's. Waco was the earliest. Then there were others like that one in Japan with that blind, bearded leader, and then Heaven's Gate.

The most blatant example to me is the Heaven's Gate Cult. Their website as of July 1 , 2019, is still viewable: Heaven's Gate I'll give a screenshot: 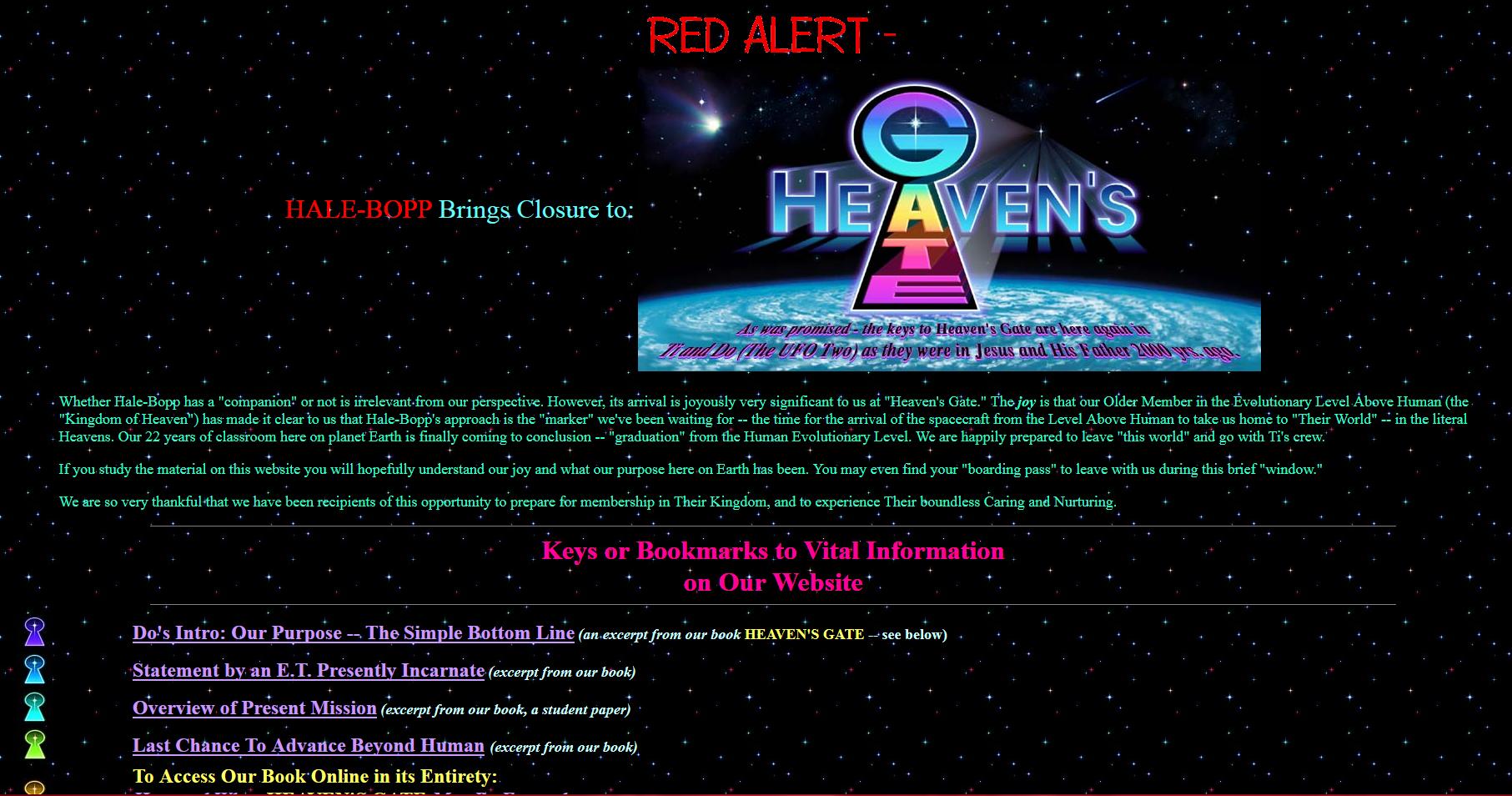 The myth here is obvious enough; the comet Hale Bopp upon arrival takes people to a spaceship. The cult members - the followers of 'Do' were meant to be those people.

It's not as clear with other cults. Let's take one right now: NXIVM. The one with the women being branded. To me it would be stretching "myth" a bit to say that they followed messages of self improvement that were myths. If this is off topic somehow open to rewording it.

Compare the advent of the internet to the invention of the printing press: the principle thing that changes is the velocity of myth propagation. The printing press was one of the most important religious "weapons" during the reformation.

All religions started as cults. The main criteria for a cult to survive its early phase and grow into a religion have been studied and identified by antropologists:

You can check any cult or religion (surviving or extinct), modern or ancient, against this list. The internet is merely a faster carrier used to permeate their specific mythology. It is a means to an end, and though the form(at) may change (like the use of YouTube in stead of text, or agressive use of social media), the goals and messages don't.

So, of course modern cults invent their own myths or tweak/re-interpret existing ones to set them apart and make their group "special" - just like they have done for millenia. It is through the propagation of item 2 in the list that a cult sets itself apart and establishes itself. Without a myth, a cult leader has nothing to fall back on to justify his/her leader position.

Not the answer you're looking for? Browse other questions tagged comparative or ask your own question.

14
Did myths involving Loki influence Christian myths?
5
Why do several myths portray snakes as good things?
6
Which gods have been killed in their myths?
1
When are the flood myths in mythologies?
7
What are some myths that combine the scatological and the sacred?
3
Are there any Demigods who became gods of their own power?
0
What succession myths exist other than the Greek one?
6
Examples of castration myths besides Ouranos
4
Non-Greek myths related to weddings
1
Sources which explore traditional mythologies and their relevance to modern times