What is the origin of legend of Alderley Edge?

What is the legend of Alderley Edge, in northern England? Are there other legends, folk tales, from this area?

What is the legend of Alderley Edge, in northern England? Are there other legends, folk tales, from this area?

Wikipedia has this to say about the legends of Alderley Edge:

There are several local legends, were the most famous being that of the Wizard of the Edge.

The Wizard of the Edge

Legend has it that a farmer from Mobberley was taking a milk white mare to sell at the market in Macclesfield. Walking along the Edge, he reached a spot known locally as "Thieves Hole" where an old man clad in a grey and flowing garment stopped him. The old man offered the farmer a sum of money for his horse but the farmer refused, saying he could get a better price at the market. The old man told the farmer that he would be at this spot again that evening when the farmer returned, not having found a purchaser for the horse. The farmer failed to sell the horse making his journey back along the Edge. At the same point, the old man appeared again, repeating his offer, which this time was accepted. The old man told the farmer to follow him with the horse. As they approached an area just past Stormy Point, the old man held out a wand and uttered a spell, opening the rock revealing a pair of huge iron gates, which the wizard – as he was – opened. Assuring no harm the wizard told the farmer to enter. The farmer did so, and was led through the gates into a large cavern. In the cavern, the farmer saw countless men and white horses, all asleep. In a recess there was a chest, from which the wizard took the payment for the horse, which he gave to the farmer. The astonished farmer asked what all this meant; the wizard explained that all these sleeping warriors were ready to awake and fight should England fall into danger. He then ordered the farmer to leave and return home.

There are several versions of the legend. It first appeared in print when a letter, sent by someone using the pseudonym "A Perambulator", was published in the Manchester Mail in 1805.[21] "A Perambulator" wrote in his letter that the story had been related to him by an old servant of the Stanley family of Alderley, and it used to be told by Parson Shrigley, former Clerk and Curate of Alderley (who was in the post from 1753 until his death in 1776 and is buried in Alderley Church). It subsequently appeared in expanded form in a tourist pamphlet, in both prose and verse forms, the former under the title The Cheshire Enchanter and the latter The Legend of the Iron Gates.[22] Several versions include parts of prophecies made by Robert Nixon in the wizard's explanation to the farmer, such as "There will come a day when these men and these horses, awakening from their enchanted slumber, will descend into the plain, decide the fate of a great battle, and save their country. This shall be when George the son of George shall reign."[23] Some later variations, such as a poem by James Roscoe,[24] say that the Wizard was Merlin and the sleeping men were King Arthur and his army.

Here Are the origins of the Legend of the Wizard:

The legend of the Wizard and King Arthur at Alderley Edge was first told by Parson Shrigley, who was the Rector at Nether Alderley, in 1753, and, in printable form at least, appeared in the 1805 edition of the Manchester Mail.

Many people, over the years, have scoured the length and breadth of Alderley Edge, in an attempt to locate the whereabouts of these gates, but to date, they have never been found. One woman, Ellen Beck, claimed that she had indeed found the Iron Gates, placing them near the Holy Well, but when she rushed off to find a witness, once again they had disappeared. Unfortunately, Ellen Beck was not seen to be a reliable witness, and her story was quickly dismissed. In later life, Ellen had a young lover, but he refused to marry her. In a fit of jealousy, she killed herself by taking poison. Her body is said to lie under a hollow bank in a field near to Brindlow Wood. At one time, the area was marked by three stones, but these have since been removed.

Alderley Edge has many different legends, but almost all of them are associated with the legend of the Wizard; for instance, when he was a young boy, Eric Garner was at Stormy Point, in January 1941, with two friends when they suddenly heard music all around them, and under the ground. This music was never heard again. A young Roy Pearson was often taken to the Old Alderley Quarry, and was told by his father if he was to place his ear to the ground, he would often hear the sound of the Knights and their horses stirring. Fred Wright, who resided at Beacon Lodge, tells the tale of three boys who were once walking near to the Wizard Inn, heading for Alderley Cross, when they decided to play a game of ’turnpikes’. Together, the boys joined hands and stood in the middle of the road, their intention was to stop anyone they came across and demand payment to pass. Near Brynlow, they happened to see a woman, who was heading towards them, and as they tried to stop her, she passed right through them. Fred Wright claims the three boys ran all the way to Alderley Cross.

The Legend of the Iron Gates:

The Legend of the Iron Gates, a tale told by Parson Shrigley, a former Clerk and Curate of Alderley, until his death in 1776, first appeared in a local newspaper, the Manchester Mail, in 1805, entitled simply The Cheshire Enchanter. According to Shrigley, who places the origins of the legend at around 80 years before his birth, the majority of the tale comes from local villagers. The next time the legend would resurface would have been in 1839, published in Blackwoods Magazine.

The Legend of the Iron Gates, first published in pamphlet form, starts with an introduction from Parson Shrigley. In it, he writes: To my dear young Ladies, may I be allowed to dedicate this little Pamphlet to you? The desire of many friends to preserve the original tradition, as nearly as possible, in the manner it was wont to be related by the Reverend Gentleman, who professed to be the best acquainted with it, induces me to collect the papers, and to arrange them, so that they may gratify not only these friends, but also any enquirer, who, struck with the scene represented on the Sign at Monk’s Heath, may make his curiosity an excuse for calling to try the strength of the Landlord’s ale. This tradition was long held in high estimation and credence by the peasantry of Alderley and Mobberley, and although the belief in Enchantment is extinguished by the gentle, but sure flow of Religious Instruction, yet there are many who would take pleasure in reading the tale of the powerful wizard, who once held sway in the very place they now inhabit. To you, then, let me tender this little offering of grateful respect: and I feel persuaded that under the guardianship of such Enchantresses, “The Iron Gates” will unfold to me a source of treasure, at least the value of the good man’s horse. I am, with the truest respect, my dear young Ladies’ most faithful and obliged Servant. Parson Shrigley finishes his introduction with the signing of his name underneath.

Shrigley then starts the narration of his tale; it begins: To stamp the following tale with respectability, I shall first observe, that it was related by no less a personage than the Parson of the parish; who with the gravity attendant on his station, used to sit in the corner, and having gained the attention of his audience around the fireside, would give the Legend of “The Iron Gates” in almost the same tone and manner he used in his professional functions. At the time in which the Reverend Gentleman used thus to amuse his neighbours, I regret to say, short hand writers were much more scarce than in our present enlightened age, so that may be one reason why I cannot boast in the narrator’s own words. I am obliged to content myself with selecting from the mighty volume of literary scraps, which may be supposed to have been left by such a personage “The Original Tradition Of The Cheshire Enchanter”, “as it was recited, and believed, by the Ancient Inhabitants of Alderley, Mobberley, and all of the country adjacent”, and which it would have been almost a sin to have condemned, or discredited. 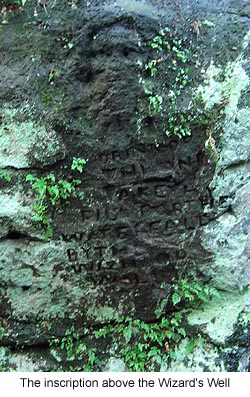 The Magic of Alderley Edge