The Great Bear and Dragon encircling the Tree of Life

Yeats commented that the Great Bear and the constellation of the Dragon 'in certain old mythologies' encircle the Tree of Life.

Ursa Major, the Great Bear and Draco are circumpolar northern and far northern sky constellations that go around Polaris, the North Pole Star.

It's a beautiful allegory, seen here with the constellations drawn (U. Minor, not U. Major) and the stars moving.

Greek mythology has the dragon Ladon "twined and twisted around the tree in the Garden of the Hesperides", guarding the golden apples. A dragon also guards the tree which holds the Golden Fleece.

But what mythology links the Great Bear with the Tree?

(And, quite frankly, what mythology links Polaris or Ursa Minor to the Tree of Life? Was this indeed 'in certain old mythologies' as Yeats wrote, or perhaps in more recent Kabbalah? Seems he might've got the Draco Polaris concept from there, as mentioned in this article: Concepts from the Bahir)

You can trace this back to either the Mesopotamian Gilgamesh epic, or ancient Egyptian constellations, mutated during the Greek rule of Egypt of the Ptolemaic dynasties. Much has been written on the first, but only recently the latter has been studied in greater detail, and it actually has links with the Gilgamesh epic, so I will elaborate on the latter below. 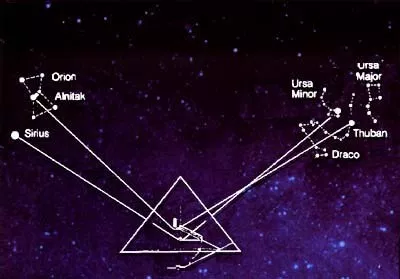 The ancient Egyptians identified the constellations Ursa Minor and Draco as a reptilian-like creature, named Taweret, who is referred to in the Pyramid Texts.

Ancient Egyptian astronomical ceilings that depicted the circumpolar constellations often pictured a female hippopotamus figure with a crocodile tail, occasionally named Ꜣst-ḏꜢmt, Isis-Djamet. She is probably a representation of the nursing goddess, Taweret that also has a crocodile tail, and stands on her two feet Early Greeks or Minoans, through a diffusion of the cult of Taweret, may have interpreted the bipedal figure of Taweret as a regional bear, an animal that, unlike the African hippopotamus, actually stands on its hind legs.

In Greek tradition, the earliest mention of the bear constellation comes from Homer, circa eighth century BC. The Egyptian word for “hippopotamus,” dıb͗ , is the probable origin for the Akkadian dabû, (Hebrew dōbh, Arabic dubb, and Ethiopian dĕb(b) meaning “bear” from which the Arabs named the brightest star of Ursa Major, Dubhe or “she bear.” These terms for “bear” could also be related to the Egyptian word for crocodile, dpy (by interchanging the plosives “p” and “b”). Taweret is usually depicted as a mix of hippo and crocodile characteristics.

Taweret appears frequently in the Book of the Dead is depicted dead centre in the 'circular zodiac' of the temple of Dendera in Upper Egypt: 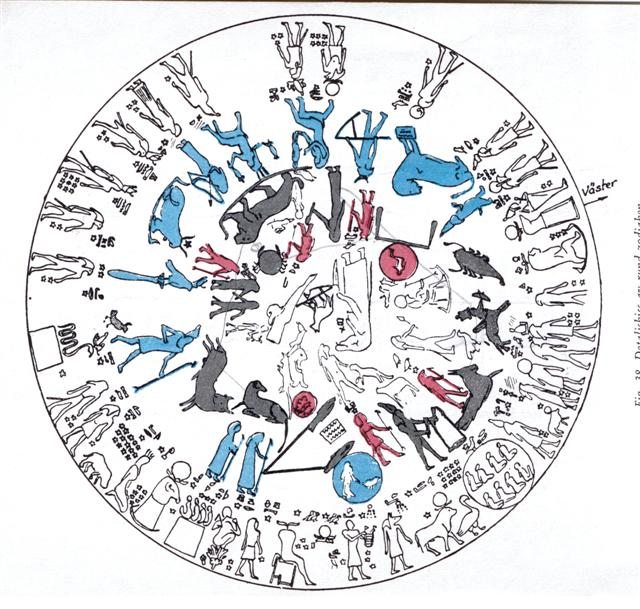 At this point you may wonder where the "tree of life constellation" is located, and this brings us to early Osirian mythology. Osiris in early dynasties was associated with a tamarisk tree trunk, was called Djed. His later mummy wrappings were symbolic of his having been encased inside a tree trunk. His mummy was considered the Axis Mundi. Over time the tree trunk was replaced by the imagery of a pillar which became known as the Djed Pillar, the Pillar of Stability. Osiris was enclosed in the trunk of a tamarisk tree, which was later cut down and used as a pillar in the palace of the King of Byblos, he metaphorically became as one with the Tree of Life in the Mesopotamian mythology. Osiris became the Axis Munde around which the heavens appear to revolve; he became the World Pillar, the link between the terrestrial and celestial worlds. If you look at the image of the pyramnid shafts and the position of Draco and Ursa Minor again, you will see that the shaft of leading out from the sarcophagus room in the pyramid of Khufu points directly to Thuban. In this way the symbolic link is made between the sarcophagus, Osiris as the first mummy, and rebirth in the afterlife.

This elaborate study might be of interest to you: The Celestial River

...the northern constellations circle the North star, therefore it is the hub, which is to say the seat of the axle/axis. So, for those cultures that envisage this hypothetical pillar as a tree, the bear and the dragon circle this tree most closely...

Not the answer you're looking for? Browse other questions tagged myth-identification comparative astrology or ask your own question.

36
What is the earliest known dragon myth?
6
Battle between the Sun and the Moon forces?
11
How did the discoveries of the planets Neptune and Uranus affect astrology?
11
Story of a man who slept in a tree and awoke to a plagued city
5
Myths of the Bermuda Triangle and its validity
9
Why does the astrology sign for cancer seem to represent a yin and yang?
10
What is the Norse equivalent to the Great Flood?
7
What are some myths that combine the scatological and the sacred?
7
What is the origin of the idea that Man is "half god and half beast"?
3
Did the Romans and Greeks worship the sun as their sun god?