Who are the twelve gods of the underworld of the Hittites?

The west wall of Chamber B in the Yazilikaya sanctuary, near the Hittite capital Hattusa, depicts - according to Wikipedia - twelve gods of the underworld: 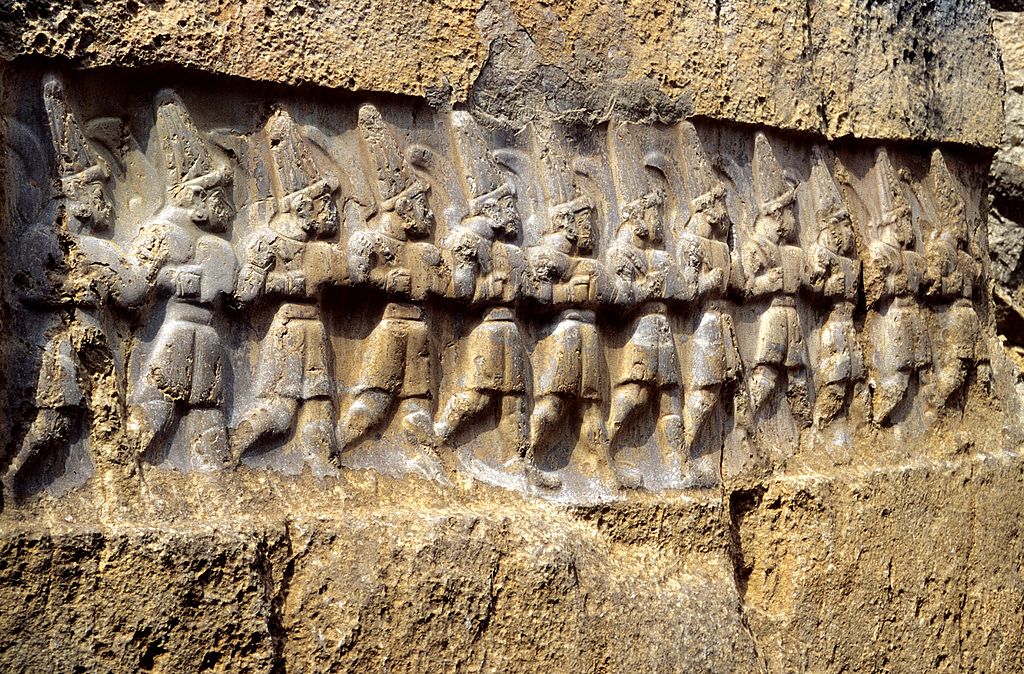 Who are these twelve gods? Do they have names, and what is their function? How do they relate to other gods of the Hittite pantheon? Do they feature in any story?

Thanks for the question. Very interesting search along the way to coming to the following info.

§18. As Macqueen (1986, 58) pointed out, "The principle weapon employed [from Hittite chariots] was the stabbing spear," but the Hittite soldiers of the Anatolian hills wielded a slashing-sword, which was replaced by "a long cutting-weapon with a straight blade by "the end of the second millennium" (Macqueen 1986, 59–60). The swords carried by the twelve runners in Chamber B resemble the short, crescent-shaped sword, decorated with animal heads which was carried by Hittite warriors in ceremonies rather than in battle (Macqueen 1986, 59–60). The Hittite axe born by Sarruma has "ribbing round the shaft-hole [that] is a feature" from, among other places, the northern Caucasus area (Macqueen 1986, 61), while the axe's blade "is of a type which can be paralleled only in the Caucasus region" (Macqueen 1986, 61).19 Although the gods carry the swords in this image, recall that in the texts the swords are embedded.

§19. The steppe war god himself was not the celestial Ram, but he was represented by the story of the ram, just as Jason can be represented by a reference to the Golden Fleece. This raises the possibility that he was not the sign of Aries but another sign that appeared in the sky along with—or at the same time as—Aries. The twelve figures associated with the sword god, then, may have nothing at all to do with Underworld deities. Instead, they may represent the twelve signs of the Zodiac, and the crossroads the Hittites associated with them might not be underground at all, but rather in the sky.

§20. The Hittite version of the Sword in the Stone story has several elements in common with the Arthurian variant. Both feature a sword in a graveyard. Both swords are associated with a king. The twelve runners in the Hittite variant parallel the Twelve Knights of the Round Table in Arthurian tradition. Also, the anvil of the Arthurian variant preserves the connection between the forging of iron and the story of the god who planted a sword in a stone. The tales are clearly part of the same tradition, yet, by placing the image of the sword god in conjunction with celestial deities at Yazilikaya, the Hittites retained an association that the Arthurian variant has lost: the tale of the Sword in the Stone had something to do with the stars.

(Note: Any typos are mine.)

The clearest, most familiar manifestation of the Underworld in Hittite religion, or more accurately in the Hurrian cult, occurs in Chamber B of the Yazilikaya sanctuary outside the city of Hattusa, with the remarkable and indeed unique Sword-God, a god in human form emerging from the hilt of a dagger, its blade too shortened to be termed a sword. This has long been recognized as identifiable with Nergal, the god of the Underworld, one of the Mesopotamian deities imported by the Hurrians into Anatolia. From a magical ritual going far to explain the Sword-God of Chamber B at Yazilikaya come the words: “He makes them as swords and fixes them in the ground.” In another text “the bronze swords of Nergal” and “the twelve gods of the crossroads” are mentioned together: hence the twelve running gods, not soldiers as once supposed, facing the Sword-God and likewise appearing in the larger Chamber A at Yazilikaya at the rear of the procession….

"The tales are clearly part of the same tradition, yet, by placing the image of the sword god in conjunction with celestial deities at Yazilikaya, the Hittites retained an association that the Arthurian variant has lost: the tale of the Sword in the Stone had something to do with the stars."

Indeed. And since the frequent and nearby enemy of the Hittites, the "Mittani" (Medes? or Metayn: Bedouin for "the 100 sons") are historically attested to be Vedic god worshipers and gave a sword to Amenhotep II which appears to be the sword found in Tut's sarcophagus, we might have an alternative theory.

Which is: Tut's sword is proven by testing to be of meteoric origin...or "something to do with the stars." Vedic...later Hindu, tell the tale of the Blacksmith god Visnu(Vishnu) forging a "celestial weapon" for Shiva (TaiShub/King Sheba, the Hittite "Storm God, married to Shauska/Istar...the Queen of Sheba). Curiously then, who would be the forger of that sword in Mittani history? Could it be King "Arta-tama" the father of "Tushratta" the sworn enemy of the Hittites? The timelines would match with Amenhotep II. The Mittani are said to have forged "Natas"/Black metal/Iron by the river Khabur.

Curious also: I found a 1600s AD book in Italian, history book, that spells Amenhotep/(Greek Amenophis) as Ame Nu Phis. Reading the word the "wrong direction" would give us PhisNu...Vishnu...in Thai, his name is Phitsanu.

Pulling a sword from a stone....forging it from a meteorite? In Thailand, in the city of Uttaradit (Uthar and Aditi?) they tell a tale of reforging a special sword that had been broken...

I believe the royal titulary hieroglyphs of Amenhotep III depict this sword being held aloft by the king...Ankh Keperu...Ankh/Ex Khabur/Calibur?

Not the answer you're looking for? Browse other questions tagged anatolia hittite or ask your own question.