Is there an ancient basis for the Cretan bull-headed sea serpent god in Mika Waltari's The Egyptian?

Here's a quick summary of the time Sinuhe, the novel's protagonist, spends in Minoan Crete2:

Minea has grown up with the mission to sacrifice herself as a virgin to the local bull god who lives in a mountain cave at the sea. Sinuhe is horrified by this and fears that he will not see Minea again. In the evening before Minea should enter the mountain cave, they marry each other unofficially. A while after Minea has been escorted into the mountain cave, Sinuhe enters the cave to search for Minea. He finds her dead body and the remains of the Cretan god (described as a bull-headed sea serpent), and realises that she has been killed by the god's high priest Minotaurus to prevent Minea from returning and tell the god is dead. Sinuhe loses his mind from grief, but Kaptah finally succeeds in calming him down and convinces him to realize that it's best to move on and return to Syria.

I wonder if this Cretan Ophiotauros has any basis in ancient legends, or if it's entirely Waltari's invention.

There are some depictions you could associate with this in the later dynasties, such as the one below, but the underlying mythology is very different. 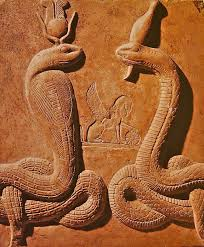 However, the left snake with the Apis bull horns depicts Isisand the right one Serapis, this is how we know it's from the Greek rule period.

There was actually a pre-dynastic pharoah called Bull. Approximately 3250bc.

Bull is the makeshift name for a predynastic petty ruler, from around 3250 BC Taurus Bull

Not the answer you're looking for? Browse other questions tagged greek myth-identification mythical-creatures minoan or ask your own question.

1
Who came first, Egyptian pharoah Horus-Aha 3100bc, or, Horus the Deity?

14
Is there a word for the type of creatures that feeds off human energy, such as emotions?
13
Is there a Western (Greek, Roman, Egyptian, or Norse) god of the cosmos?
3
Is there a mythological basis for the idea of a unicorn princess?
8
Is there a legend or an explanation for the symbol of a swan with a woman's head?
7
Is there an Egyptian Old Man of the Sea?
8
Is there a myth that dolphins were humans who chose to return to the sea?
5
An ancient source for the myth of Venus' creation of red roses?
1
Is there an introductory scholarly study guide, involving primary works being discussed, for ancient greek mythology?