In the Gospel of luke, Jesus exorcises a multitude of demons who call themselves Legion into a herd of pigs which he then drove into a lake.

26 They sailed to the region of the Gerasenes, which is across the lake from Galilee. 27 When Jesus stepped ashore, he was met by a demon-possessed man from the town. For a long time this man had not worn clothes or lived in a house, but had lived in the tombs. 28 When he saw Jesus, he cried out and fell at his feet, shouting at the top of his voice, “What do you want with me, Jesus, Son of the Most High God? I beg you, don’t torture me!” 29 For Jesus had commanded the impure spirit to come out of the man. Many times it had seized him, and though he was chained hand and foot and kept under guard, he had broken his chains and had been driven by the demon into solitary places.

Legion,” he replied, because many demons had gone into him. 31 And they begged Jesus repeatedly not to order them to go into the Abyss.

32 A large herd of pigs was feeding there on the hillside. The demons begged Jesus to let them go into the pigs, and he gave them permission. 33 When the demons came out of the man, they went into the pigs, and the herd rushed down the steep bank into the lake and was drowned. Luke 8 New International Version (NIV)

As far as I know this is the earliest case of an exorcism. I have searched the writings of Josephus and the Tanakh for a mention of exorcism as noted by Wikipedia but to no avail.

Hinduism is the world's third largest religion. It is an Indian religion and dharma, or way of life, widely practised in the Indian subcontinent and parts of Southeast Asia. Hinduism has been called the oldest religion in the world, and some practitioners and scholars refer to it as Sanātana Dharma, "the eternal tradition", or the "eternal way", beyond human history. Scholars regard Hinduism as a fusion or synthesis of various Indian cultures and traditions, with diverse roots and no founder. This "Hindu synthesis" started to develop between 500 BCE and 300 CE, after the end of the Vedic period (1500 to 500 BCE), and flourished in the medieval period, with the decline of Buddhism in India.

Although Hinduism contains a broad range of philosophies, it is linked by shared concepts, recognisable rituals, cosmology, shared textual resources, and pilgrimage to sacred sites. Hindu texts are classified into Śruti ("heard") and Smṛti ("remembered"). These texts discuss theology, philosophy, mythology, Vedic yajna, Yoga, agamic rituals, and temple building, among other topics. Major scriptures include the Vedas and the Upanishads, the Puranas, the Mahabharata, the Ramayana, and the Āgamas. Sources of authority and eternal truths in its texts play an important role, but there is also a strong Hindu tradition of questioning authority in order to deepen the understanding of these truths and to further develop the tradition.

The practice of exorcism are quite prominently connected amongst the Hindus.

Beliefs and practices pertaining to the practice of exorcism are prominently connected with Hindus. Of the four Vedas (holy books of the Hindus), the Atharva Veda is said to contain the secrets related to exorcism, magic and alchemy. The basic means of exorcism are the mantra and the yajna used in both Vedic and Tantric traditions. Vaishnava traditions also employ a recitation of names of Narasimha and reading scriptures, notably the Bhagavata Purana aloud.

According to Gita Mahatmya of Padma Purana, reading the 3rd, 7th and 9th chapter of Bhagavad Gita and mentally offering the result to departed persons helps them to get released from their ghostly situation. Kirtan, continuous playing of mantras, keeping scriptures and holy pictures of the deities (Shiva, Vishnu, Hanuman, Brahma, Shakti, etc.) (especially of Narasimha) in the house, burning incense offered during a Puja, sprinkling water from holy rivers, and blowing conches used in puja are other effective practices.[citation needed] It is also believed that praying to Lord Hanuman gives the best result. It is also mentioned in the Hanuman Chalisa. It is believed that just uttering the name of Lord Hanuman makes the evil forces and devils tremble, in fear.

The main puranic resource on ghost and death-related information is Garuda Purana.

A complete description of birth and death and also about the human soul are explained in Katō Upanishad, a part of Yajur Veda. A summary of this is also available as a separate scripture called Kāttakaṃ. - Exorcism (Hinduism) 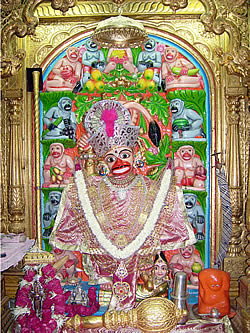 In Hindu tradition, beliefs and practices pertaining to the practice of exorcism are prominently connected with the ancient Dravidians in the south. Of the four Vedas (holy books of the Hindus), the Atharva Veda is said to contain the secrets related to magic and medicine. Many of the spells described in this book are for casting out demons and evil spirits. These beliefs are particularly strong and practiced in West Bengal, Orissa and southern states like Kerala. The basic means of exorcism are mantra and yajna used in both Vedic and Tantric traditions.

Virtually all mythologies from cultures geographically nearby the origin of Judaism have many common myths regarding demons and exorcism through incantations. Perhaps the most illustrative collection which draws from many of these cultures is compiled in the Ancient Egyptian Papyrus named Leiden 343 + 345.

A detailed study of these incantations can be read on academia.edu