I was wondering if anyone on here has a good reference for Christian mythos in the way of specific characters/Christian mythological creatures, i.e. Nephilim and Seraphim? Anything having to do with the hierarchies of heaven and hell, directly referenced in the Bible or thinly correlated, anything works.

Best bets for anything on the angelic race will be the Catholic Encyclopedia (online or in print) and the Catechism of the Catholic Church (paragraphs 325 and following).

A lot of "angel stuff" you find in the popular press is probably more new-agey dross than it is factual or informative. The truth is, there just isn't a whole lot more known about angels & nephilim than what you find in the Bible itself.

Most of the angel mythos isn't Christian or even Judaic in origin. The word comes from the Greek angelos, which itself could be considered as a translation of the Hebrew word mal’akh, meaning ’messenger’, etymology suggesting a being responsible for carrying messages between the human world and some other realm or realms of existence. 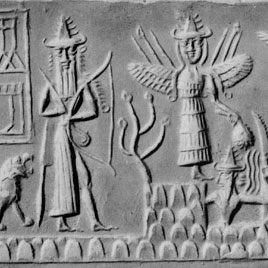 Sumerian drawings have left us ample evidence in the form of winged humans connected to their belief in ’messengers of the gods’, angelic forces who ran errands between gods and humans.

The Sumerians also believed that each person had a ’ghost’ of some sort (that we would now probably label as ’guardian angel’) with this entity remaining a constant companion for a person throughout their life.

Altars that appear to be dedicated to guardian angels have been found in the excavations of ancient Sumerian homes, along with stone engravings and temple wall paintings of human figures with wings.

According to Sumerian creation stories, angels were known under the name of Anunnaki or Anannage (great sons of Anu), founders of their culture. Ea was the chief God of Sun and Sky, and the tale of the Nephilim, alluded to in Genesis 6 is based on some of the negative aspects of the Apkallu tradition. The apkallu in Sumerian mythology were seven legendary culture heroes from before the Flood, of human descent, but possessing extraordinary wisdom from the gods, and one of the seven apkallu, Adapa, was therefore called "son of Ea" the Babylonian god, despite his human origin.

In one of these Sumerian stories, Ninlil or Ninkharsag ‘Lady of Kharsag,’ wife of Enlil, asks the council of seven to create Eden (E-din) or heavenly garden. For Sumerians, E-din was ‘abode of rightful ones.’ This is the same heavenly garden which also can be found in the Bible. The Hebrew myth is very similar to the one found in Sumerian “Epic of Gilgamesh” furthermore linking with the Book of Genesis ends with the story of Tower of Babel (Babylon)

After the polytheistic Semitic tribes had conquered the Sumerians around 1900 BC their mythical cosmology borrowed the notion of angels from the vanquished Sumerians.
These Semitic peoples developed the idea of a corpus of angels split into groupings answerable to each of the many Semitic gods, further subdividing these groups into vertical ’ranked’ hierarchies, a notion which persisted into Zoroastrianism and monotheistic Judaism.

Not the answer you're looking for? Browse other questions tagged christianity angels or ask your own question.

21
Where does the story of selling one's soul to the devil first occur in Christian myth?
14
Did myths involving Loki influence Christian myths?
7
Are angels ever depicted fighting in Abrahamic religious texts?
10
What are the punishments for the seven deadly sins?
9
Are there Christian influences in the Dionysiaca?
9
How does the Christian Hell come to be called Hell? Is it related to the Norse Hel?
5
Was the alleged Christian influence of Norse Mythology primarily due to Snorri Sturluson's writings?
1
What Christian influences are there in the Prose Edda, besides the prologue?
2
Any stories in Bible/Christian mythology about person regaining Adam's primeval innocence?