What is this Norse symbol?

It is possibly Icelandic but I can only find it in one place with no name or explanation. Similar to a helm of awe but with an A in the middle and the ends are alternating circles and crescents. 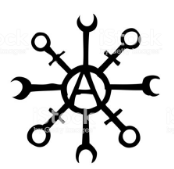 I can notice 3 kinds of symbols (anarchy, Venus or gold, and silver or the crescent moon of Islam) in an overal feel of a Ægishjálmur (Helm of Awe) or Vegvísir.

The A enclosed in a circle is the symbol for Anarchy.

Do note that you stated in your question that you thought all symbols where Norse, I think that the creator took some artistic liberties to make the art more aesthetically appealing. h\t @DukeZhou

Anarchy is the state of a society being freely constituted without authorities or a governing body. It may also refer to a society or group of people that totally rejects a set hierarchy.Wikipedia on Anarchy(It is a little more complicated than the quote text says but you get the idea).

The circle with stripes is the alchemical symbol for copper and Venus. Copper was associated with the planet Venus by alchemists. In our modern world this symbol is a symbol to denote the female sex.

The crescent moon is a notable symbol of Islam (although there are disagreements by a growing group of modern Islamic scholars) but is actually more notable as the symbol of the Ottoman Empire following the conquest/fall of Constantinople in 1453. .

Not the answer you're looking for? Browse other questions tagged norse iconography or ask your own question.

3
What does these runes say?

33
What is the difference between giants, Jotuns and trolls in Norse mythology?
7
Was the transition of the descendants of Rígr into the family of Dan a peaceful one or a violent one?
13
Why does Óðr (Oder) travel away from Freyja?
11
Who is the mother of Freyr and Freyja?
7
Can Thor fly in Norse mythology?
8
What culture does this duality symbol belong to?
5
What symbol is on the staff of The Sorceress by Georges Merle?
3
Are owls mentioned in Norse Mythology?
2
Are there any beings from Norse Mythology that could be mistaken for a Kitsune (fox-person spirit)?