There was a question on English SE about the name of horse-headed human (opposite of Centaur), I wrote Ipotane in an answer. When I searched up 'Ipotane' on Google, it gave me the following image: 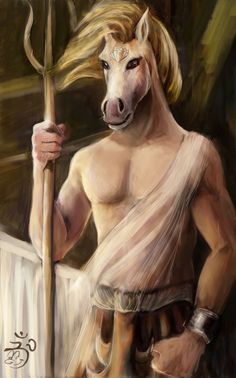 I wonder if it's correct and used in mythology.

Does anyone have any information about 'Ipotane'? Or should it be reverse-centaur?

I don't think it would be Hippotane: ιππότης (hippotes) in Ancient Greek just means "soldier" or something close to our word "knight".

If you want to derive from Greek, then Wikipedia suggests ιππότης λεώς (hippotes leous), but that literally means "horse people", so that's not exactly it either.

Some versions of the Perseus myth mention a horse-headed man, based on the cave-cult of the horse-headed Demeter, but gives this creature no specific name: 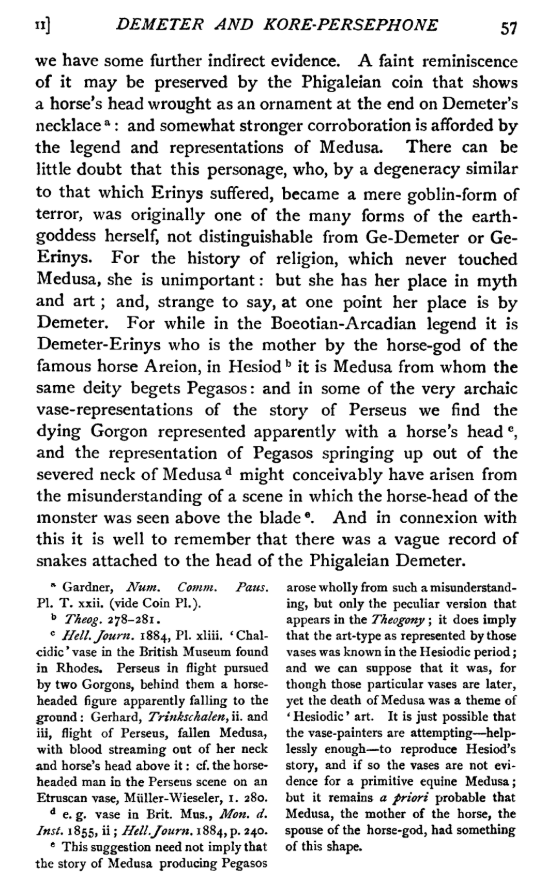 I would suggest μεάλογον (mealogon). με άλογο means horse-headed, adding an "n" to rhyme with "gorgon", but this has no historical basis.

There's a race of dog-headed people known as Cynocephaly (or Kynokephali) which literally means dog-head. Akephaloi is also used to describe the Blemmey who has no head. It would probably make sense to call horse-headed people Hippocephali or Ippokephaloi or something like that.

"Reverse-Centaur" would be very incorrect. "Centaur" or "Kentavros" is not a native Greek word, it's possibly imported from the Hindu Kinnara, (or some Persian or Assyrian iteration of the concept) which is either horse-head-like or centaur-like depending on when and where the term is used. In modern Southeast Asia, Kinnara is centaurine, but a bird body instead of a horse body, and this version seems to have eclipsed the earlier horse version.

I assume Ipotane as a race and Hippotes as "knight" sound similar like if you were comparing the English terms "horseman" and "horse man". So even though it's confusing, it's probably not incorrect.

If it helps to understand the headspace of the ancient proto-Greeks and Mycenaeans, they did not ride horses themselves, their horses pulled wagons and chariots. Their first exposure to horse riding would have been to someone like the Scythian raiders, and possibly misunderstood stories of Scythians from their neighboring empires, confusing "horsemen" as "horse men" and used the foreign word "centaur" to describe them. The myths of wild and violent centaurs might reflect these horse-riding raiders.

14
Is there a word for the type of creatures that feeds off human energy, such as emotions?
6
Marine Human Hybrids
3
Is there a specific bird that a harpie had under her human part?
5
Are there any stories which are about a species that is neither human nor divine?
5
Why is Aether shown battling a lion-headed giant?
12
Slavic mythology, human-animal hybrid creature
8
Did the manticore always have a human head?
5
Looking for a mythological flying creatures that has saved human life
4
Is there an ancient basis for the Cretan bull-headed sea serpent god in Mika Waltari's The Egyptian?