What are the origins of the mythic Shachihoko?

A shachihoko (鯱鉾) is an animal in Japanese folklore with the head of a tiger and the body of a carp. It is said to bring rain so is often used on roofs, most notably on Nagoya Castle: 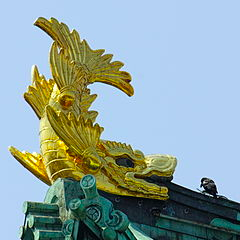 Since tigers became extinct in Japan in prehistoric times, it is possible that the creature was not a 100% native Japanese creation.

If not, then how was the creature created, what was it based on? Was it partly derived, say the tiger part, from mainland Asian influences, whose myths feature tigers prominently? Was there originally a similar chimeric creature, one that took on its modern tiger-carp form later? Or was it largely based on a similar creature in foreign myth?

You are correct in that this being is not an entirely Japanese creation.

According to the Japanese Buddhist Statuary page about this creature, its actual origin is unknown, suggesting that it has its origins in foreign myths:

Probably derived from the ancient Vedic sea monster known (in Sanskrit) as Makara. Also possibly derived from a type of Chinese temple-roof ornament known in Japan as Shibi 鴟尾

The frequent use as roof ornaments occurred in the Edo era, and it was believed that the

The creatures are thought to provide protection against fire, as they are attributed with the power to control rain.

An interesting perspective of the origins of the Shachihoko comes from the blog article The twin fish, state symbol of Uttar Pradesh and commonly found on ancient buildings of Ayodhya, is the biggest clue to the link and the route undertaken by Kaya (Kara/Gaya) royals to Korea (and Japan), that a cultural/mythological route between India and Korea and then to Japan.

In the Nippon.com blog article Real Animals and Mythical Counterparts, states that the kanji for shachi (an abbreviated form of shachihoko) shares the same kanji for an orca or killer whale - although it is not clear which influence which. However, the writers suggest another link in that the orca