What symbol is on the staff of The Sorceress by Georges Merle?

This painting depicts a number of symbols from various cultures. It was shown at a Paris exhibition in 1883, and I suspect the painting is more imagination than an accurate depiction of any sorceress. That said, the subject holds a staff with a symbol on top. The closest I have found is a "Pagan symbol of Summer" shown on this site, which grouped it among other symbols that appear to be western European.

Is that the symbol used in the painting? If so, why did the artist use a Pagan symbol, if he wanted to affect a non-European vibe?

In modern Wicca, this staff is called "The Stang". In its simplest form, a forked staff, Witches use the Stang in various ways including representing the Horned One, aiding in spirit flight, and directing energy. 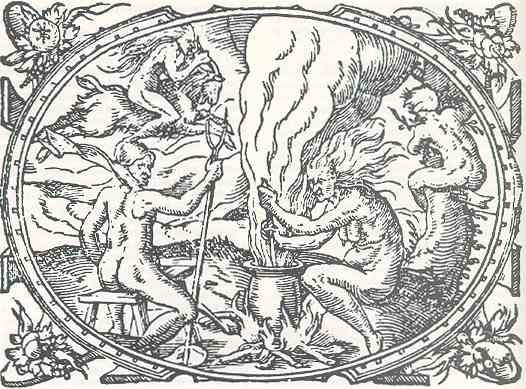 CodosaurCodosaur
5,28644 silver badges1616 bronze badges
2
Add a comment  |
0
Want to improve this post? Provide detailed answers to this question, including citations and an explanation of why your answer is correct. Answers without enough detail may be edited or deleted.

I think that is the symbol of Isis. Here is a picture: https://www.nationalgeographic.com/content/dam/archaeologyandhistory/rights-exempt/history-magazine/2020/03-04/isis-goddess/isis-mural-temple-horemheb.ngsversion.1584648217707.adapt.1900.1.jpg

Not the answer you're looking for? Browse other questions tagged iconography or ask your own question.

9
Why does the astrology sign for cancer seem to represent a yin and yang?
8
What culture does this duality symbol belong to?
8
What is the significance of the three stars in Ruben's Saturn painting?
5
What do we know about the winged male figures representing the souls of warriors in the weighing of souls?
1
Did the ancient Egyptians worship Cats and Dogs deities at the same period?
8
Who is the female figure in the Nirgul tablet?
5
What is this Norse symbol?
6
What is the significance of the two cities on the Shield of Achilles?
3
Who is the figure holding a cross next to Christ fallen with the cross in the statue at Budapest 2, Pasaréti tér?