Who came first, Egyptian pharoah Horus-Aha 3100bc, or, Horus the Deity?

Hor-Aha (or Aha or Horus Aha) is considered the second pharaoh of the First Dynasty of Egypt by some Egyptologists, others consider him the first one and corresponding to Menes. He lived around the 31st century BC and is thought to have had a long reign. Horus-Aha

Horus or Her, Heru, Hor, Har in Ancient Egyptian, is one of the most significant ancient Egyptian deities who served many functions, most notably god of kingship and the sky. He was worshipped from at least the late prehistoric Egypt until the Ptolemaic Kingdom and Roman Egypt. Horus the Deity

So did the Historical Horus-Aha, pre-date Horus the Deity?

Short answer: no, Hor-Aha did not pre-date the first mention of the deity Horus.

Long answer: Aha is according to Egyptology either:

Regardless of whether he was the same as or the successor of Nemes, the name Hor-Ahah is what is called a 𓅃𓊁 Horus Name. Pharaohs had many titles and names, including a Horus Name, as they claim to be direct descendants of the deity. This practice was already in place before the first dynasty, then applied to local kings. The practice originates in prehistoric times. Many of the oldest-known Egyptian pharaohs were known only by this title.

The Horus name was usually written in a serekh, a representation of a palace façade. 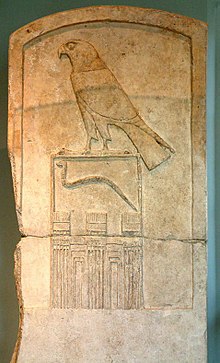 The name of the pharaoh was written in hieroglyphs inside this representation of a palace. Typically an image of the falcon god Horus was perched on top of or beside it. The pharaoh had many other names bestowed. As an example, the full titulary of Eighteenth Dynasty pharaoh Hatshepsut, providing a guide to pronunciation and its equivalent meaning and showing the differences since this pharaoh is a woman, is as follows,

Since the practice dates back to pre-dynastic times, the deity Horus is by definition older than the name Hor-Aha. The earliest recorded form of Horus is the tutelary deity of Nekhen in Upper Egypt. Nekhen was the religious and political capital of Upper Egypt in prehistoric Egypt. The first settlement at Nekhen dates from either the predynastic Amratian culture (c. 4400 BC) or, perhaps, during the late Badari culture (c. 5000 BC).

The Amratian culture (also called Naqada) developed new styles of pottery and more intricate carving. Many animal-shaped and shield-shaped palettes (used for mixing cosmetics) have been recovered. They form a clear link in development towards the ceremonial palettes of the early dynastic period (eg the Narmer palette). They also developed their skills in metalworking, in particular copper which they traded with the ancient peoples of Mesopotamia and Asia. The introduction of cylindrical seals (a typically Mesopotamiam device) showed that their culture was influenced by their neighbours, but the familiar Egyptian gods Hathor, Ra and Horus also date to this period. So the first depictions of the deity Horus actually pre-date Hor-Aha by possibly as much as 1300 years.

4
Is there an ancient basis for the Cretan bull-headed sea serpent god in Mika Waltari's The Egyptian?

20
What were the five parts of the Egyptian soul?
6
What is the difference between Ra and Horus?
8
Do the Egyptian gods bleed?
7
Who was the spirit entity who Solomon commanded to help build the temple?
6
Did ancient Egypt use the abbreviation IHS for "Isis, Horus, and Seb"?
9
Who was the first Satan like deity/creature/person in mythology?
0
Do any ancient sources describe Set as a mortal? And could Set be Sekhen?
2
What is the ancient Egyptian word for crocodiles?