Was Horatius Cocles a footman or mounted?

The myths of ancient Rome recount of Horatius Cocles, a brave Roman soldier officer who has defended the Roman republic from an Etruscan attack. He stood alone on the sole bridge above the Tiber river separating the attackers from the city of Rome, while his companions demolished the bridge. The Etruscan were so afraid of his stance that they dared not to approach him, and instead only threw their spears from afar, none of which would hit him. When the bridge was finally demolished behind her, and he was on the side farther from the city, he has jumped into the river.

When Horatius Cocles has performed this heroic deed, was he on foot, or was he on a horse? Modern illustrations seem to vary in this important detail.

Livy, Plutarch, Dionysius of Halicarnassus and Polybius seem to agree that Horatius Cocles was on foot, when he defended the bridge.

He therefore warned and commanded them to break down the bridge with steel, with fire, with any instrument at their disposal; and promised that he would himself receive the onset of the enemy, so far as it could be withstood by a single body. Then, striding to the head of the bridge, conspicuous amongst the fugitives who were clearly seen to be shirking the fight, he covered himself with his sword and buckler and made ready to do battle at close quarters, confounding the Etruscans with amazement at his audacity.

Yet were there two who were prevented by shame from leaving him. These were Spurius Larcius and Titus Herminius, both famous for their birth and their deeds. With these he endured the peril of the first rush and the stormiest moment of the battle. But after a while he forced even these two to leave him and save themselves, for there was scarcely anything left of the bridge, and those who were cutting it down called to them to come back.

Horatius Cocles, however, first, and with him two of the most illustrious men of the city, Herminius and Lartius, defended the wooden bridge against them. Horatius had been given his surname of Cocles because he had lost one of his eyes in the wars.

Some, however, say that his nose was flat and sunken, so that there was nothing to separate his eyes, and his eye-brows ran together, and that for this reason the multitude wished to call him Cyclops, but by a slip of the tongue the name of Cocles became generally prevalent instead.

This Cocles, standing at the head of the bridge, kept the enemy back until his companions had cut the bridge in two behind him. Then, all accoutred as he was, he plunged into the river and swam across to the other side, in spite of a wound in the buttocks from a Tuscan spear.

Publicola, out of admiration for his valour, proposed that every Roman should at once contribute for him as much provision as each consumed in a day, and that afterwards he should be given as much land as he could plough round in a day. Besides this, they set up a bronze statue of him in the temple of Vulcan, to console him with honour for the lameness consequent upon his wound.

Source: The Life of Publicola, The Parallel Lives by Plutarch, published in Vol. I of the Loeb Classical Library edition, 1914

While they were all fleeing to the city and endeavouring to force their way in a body over a single bridge, the enemy made a strong attack upon them; and the city came very near being taken by storm, and would surely have fallen if the pursuers had entered it at the same time with those who fled.

Those who checked the enemy's attack and saved the whole army were three in number, two of them older men, Spurius Larcius and Titus Herminius, who commanded the right wing, and one a younger man, Publius Horatius, who was called Cocles from an injury to his sight, and one of his eyes having been struck out in a battle, and was the fairest of men in philosophical appearance and the bravest in spirit.

These three men, then, all alone, with their backs to the bridge, barred the passage of the enemy for a considerable time and stood their ground, though pelted by many foes with all sorts of missiles and struck with swords in hand-to-hand conflict, till the whole army had crossed the river.

When they judged their own men to be safe, two of them, Herminius and Larcius, their defensive arms being now rendered useless by the continual blows they had received, began to retreat gradually. But Horatius alone, though not only the consuls but the rest of the citizens as well, solicitous above all things that such a man should be saved to his country and his parents, called to him from the city to retire, could not be prevailed upon, but remained where he had first taken his stand, and directed Herminius and Larcius to tell the consuls, as from him, to cut away the bridge in all haste at the end next the city (there was but one bridge in those days, which was built of wood and fastened together with the timbers alone, without iron, which the Romans preserve even to my day in the same condition), and to bid them, when the greater part of the bridge had been broken down and little of it remained, to give him notice of it by some signals or by shouting in a louder voice than usual; the rest, he said, would be his concern.

Having given these instructions to the two men, he stood upon the bridge itself, and when the enemy advanced upon him, he struck some of them with his sword and beat down others with his shield, repulsing all who attempted to rush upon the bridge. For the pursuers, looking upon him as a madman who was courting death, dared no longer come to grips with him. At the same time it was not easy for them even to come near him, since he had the river as a defence on the right and left, and in front of him a heap of arms and dead bodies. But standing massed at a distance, they hurled spears, javelins, and large stones at him, and those who were not supplied with these threw the swords and bucklers of the slain. But he fought on, making use of their own weapons against them, and hurling these into the crowd, he was bound, as may well be supposed, to find some mark every time.

Finally, when he was overwhelmed with missiles and had a great number of wounds in many parts of his body, and one in particular inflicted by a spear which, passing straight through one of his buttocks above the hip-joint, weakened him with the pain and impeded his steps, he heard those behind him shouting out that the greater part of the bridge was broken down. Thereupon he leaped with his arms into the river and swimming across the stream with great difficulty (for the current, being divided by the piles, ran swift and formed large eddies), he emerged upon the shore without having lost any of his arms in swimming.

Source: The Roman Antiquities of Dionysius of Halicarnassus, Book 4, published in Vol. III of the Loeb Classical Library edition, 1940

It is narrated that when Horatius Cocles was engaged in combat with two of the enemy at the far end of the bridge over the Tiber that lies in the front of the town, he saw large reinforcements coming up to help the enemy, and fearing lest they should force the passage and get into town, he turned round and called to those behind him to retire and cut the bridge with all speed.

His order was obeyed, and while they were cutting the bridge, he stood to his ground receiving many wounds, and arrested the attack of the enemy who were less astonished at his physical strength than at his endurance and courage.

The bridge once cut, the enemy were prevented from attacking; and Cocles, plunging into the river in full armour as he was, deliberately sacrificed his life,2 regarding the safety of his country and the glory which in future would attach to his name as of more importance than his present existence and the years of life which remained to him.

Such, if I am not wrong, is the eager emulation of achieving noble deeds engendered in the Roman youth by their institutions.

Source: The Histories of Polybius, Book 6, published in Vol. III of the Loeb Classical Library edition, 1922 thru 1927 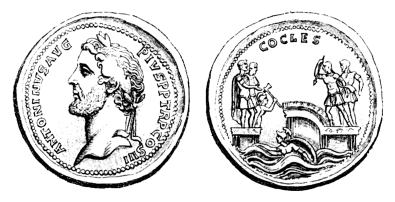 Not the answer you're looking for? Browse other questions tagged roman or ask your own question.

15
Worship of Epona in the Roman Empire
9
When Was the Goddess Pomona's Festival?
10
Was Apollo the sun god in Augustan Rome?
11
Why was Europe named after Europa?
8
Was divination a job reserved to women?
5
Of whom was the Trojan Palladium supposed to be an image?
8
Roman - exactly what did they think the Sun was?
8
Was Saturn a person or god among the early Romans?
5
Was Plutus the son of Pluto and Proserpina?