Usually, fantasy creatures are easy to track back to mythology and folklore and there is only a handful I can't trace back. Of course, that can be because they're actually original, but oftentimes I feel like I've seen them before, and I can't grasp where. I mean, even for "clockwork" robots and automatons, you can look at Leonardo da Vinci's knight.

So, what lizardmen am I talking about? Well, here is a semi-rigid set of tropes:

Now, you can take some away, but the fact that this set of characteristics even exists points to an origin point, or ground zero that I can't seem to find.

Elves have such a set too, their ground zero is Tolkien and probably the fertility gods of Norse mythology. Subsequent instances could be described in relation to ground zero. Even if they subverted it, they still had to subvert something.

So, where did lizardmen originate from?

Note: I'm not familiar with this site's tags, so please help!

Not strictly lizard people but snake people were very common in mythology and they could well have evolved from that idea.

From Greek Lahmias to Hindu Nagas and gods or monsters like Echidna or Typhon snake people with human and snake features seem to have spring up all over the world.

Another possibility (and the only early reference I can see to anything very similar) is dragon kings in Chinese Mythology which were occasionally depicted as half-man half-dragon.

My last suggestion would be that they are an entirely modern fantasy creation, with no myth or folklore roots, inspired by plain old dragons or dinosaurs. A race of intelligent reptilian humanoids plays nicely to people's fascination with both. Reptiles are also nicely alien (and indeed many alien myths involve extraterrestrials being reptile like) so make good fantasy races that are vastly different from humans, elves etc.
If this were the case I'm not sure what the original fantasy work would be to include them, they are very prominent in Warhammer which probably helped populise them but that's a quite recent work so probably not the origin. They also feature quite a bit in different forms in DnD but I imagine there may be a novel that predates that too.

One can dismiss that it came from the 1954 American movie The Creature from the Black Lagoon! 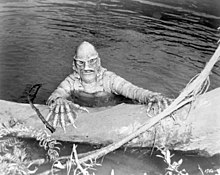 Before going on, let us be clear as to what a lizard is.

Lizards are a widespread group of squamate reptiles, with over 6,000 species,1 ranging across all continents except Antarctica, as well as most oceanic island chains. The group is paraphyletic as it excludes the snakes and Amphisbaenia; some lizards are more closely related to these two excluded groups than they are to other lizards. Lizards range in size from chameleons and geckos a few centimeters long to the 3 meter long Komodo dragon.

Most lizards are quadrupedal, running with a strong side-to-side motion. Others are legless, and have long snake-like bodies. Some such as the forest-dwelling Draco lizards are able to glide. They are often territorial, the males fighting off other males and signalling, often with brightly colours, to attract mates and to intimidate rivals. Lizards are mainly carnivorous, often being sit-and-wait predators; many smaller species eat insects, while the Komodo eats mammals as big as water buffalo.

Lizards make use of a variety of antipredator adaptations, including venom, camouflage, reflex bleeding, and the ability to sacrifice and regrow their tails.

In fiction, anthropomorphic reptilian races or beings commonly appear in fantasy and science fiction. They can be based on various reptiles, like crocodiles, alligators, snakes, dinosaurs, and the fictional dragons. They are often depicted as powerful warriors, though their relative intelligence to humans varies - as with other anthropomorphic races, a greater resemblance to humans often denotes more "civilized" behaviour.

Many will associate this in one form or other with the serpent in the Garden of Eden and often depicted as half man and half snake.

1.Now the serpent was more subtle than any beast of the field which the LORD God had made. And he said unto the woman: 'Yea, hath God said: Ye shall not eat of any tree of the garden? 2.And the woman said unto the serpent: 'Of the fruit of the trees of the garden we may eat; 3.but of the fruit of the tree which is in the midst of the garden, God hath said: Ye shall not eat of it, neither shall ye touch it, lest ye die.' - Genesis 3:1-3

For the Ancients the Devil sought out to devour souls (people).

Be sober-minded and alert. Your adversary the devil prowls around like a roaring lion, seeking someone to devour. - 1 Peter 5:8

For the Ancients the serpent represented sexual promiscuity and sin.

God placed Adam in the Garden to tend it and warned Adam not to eat the fruit of the Tree of Knowledge of Good and Evil, "for in the day that thou eatest thereof thou shalt surely die." The serpent tempts Eve to eat of the Tree, but Eve tells the serpent what God had said (Genesis 3:3). The serpent replied that she would not surely die (Genesis 3:4) and that if she eats the fruit of the tree "then your eyes shall be opened, and ye shall be as gods, knowing good and evil." (Genesis 3:5) Eve ate the fruit and gave it to Adam and he also ate. God, who was walking in the Garden, finds out and to prevent Adam and Eve from eating the fruit of the Tree of Life and living forever, they are banished from the Garden and God posts an angelic guard. The serpent is punished for its role in the fall by being a curse that God change the serpent into a snake to crawl on its belly and eat dust.

There is a debate about whether the serpent in Eden should be viewed figuratively or as a literal animal. According to one midrashic interpretation in Rabbinic literature, the serpent represents sexual desire; another interpretation is that the snake is the yetzer hara. Modern Rabbinic ideas include interpreting the story as a psychological allegory where Adam represents reasoning faculties, Eve the emotional faculties, and the serpent the hedonic sexual/physical faculties. Voltaire, drawing on Socinian influences, wrote: "It was so decidedly a real serpent, that all its species, which had before walked on their feet, were condemned to crawl on their bellies. No serpent, no animal of any kind, is called Satan, or Belzebub, or Devil, in the Pentateuch." - Serpents in the Bible 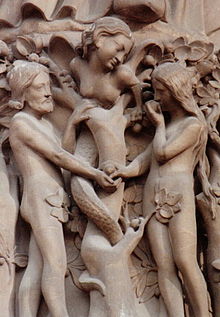 Adam, Eve, and the (female) serpent at the entrance to Notre Dame Cathedral in Paris, France, is the portrayal of the image of the serpent as a mirror of Eve was common in earlier iconography as a result of the identification of women as the source of human original sin.

In one of the oldest stories ever written, the Epic of Gilgamesh (c. 2100 BC), Gilgamesh loses the power of immortality, stolen by a snake. The serpent was a widespread figure in the mythology of the Ancient Near East. Ouroboros is an ancient symbol of a serpent eating its own tail that represents the perpetual cyclic renewal of life, the eternal return, and the cycle of life, death and rebirth, leading to immortality.

Archaeologists have uncovered serpent cult objects in Bronze Age strata at several pre-Israelite cities in Canaan: two at Tel Megiddo, one at Gezer, one in the sanctum sanctorum of the Area H temple at Hazor, and two at Shechem. In the surrounding region, a late Bronze Age Hittite shrine in northern Syria contained a bronze statue of a god holding a serpent in one hand and a staff in the other. In sixth-century Babylon, a pair of bronze serpents flanked each of the four doorways of the temple of Esagila. At the Babylonian New Year festival, the priest was to commission from a woodworker, a metalworker and a goldsmith two images one of which "shall hold in its left hand a snake of cedar, raising its right [hand] to the god Nabu". At the tell of Tepe Gawra, at least seventeen Early Bronze Age Assyrian bronze serpents were recovered. The Sumerian fertility god Ningizzida was sometimes depicted as a serpent with a human head, eventually becoming a god of healing and magic. - Serpents in the Bible

Do not believe that one can be able to verify another lizard like humanoid folklore or legends older than the Epic of Gilgamesh. Even the Chinese, Japanese, Egyptian or Greek folklore can not be dated older.

It is very possible that the Epic of Gilgamesh Is the origin of Lizardmen folklore. Of course the Hebrew Scriptures has some part to play in all this, in a more indirect manner.

12
Where did the Easter Islanders come from, according to their own myths?
11
Where did the various artistic depictions of the Chimera originate?
13
Where did the notion the moon was made of cheese originate?
12
Where does the idea that dragons hoard gold come from?
4
Is it possible that the Heracles myths are a compilation of stories from multiple cultures?
3
Why do so many cultures have a myth of the world being made or remade from water?
9
Are there any old religions/mythologies where people would get tattood to get closer to or for their god?
8
Where does the idea of counting crows come from?
3
How did Santa Claus appear in this world?