What is the symbolism of horses in Canaanite sun worship?

In the Book of Kings it says:

"He [King Josiah] did away with the horses that the kings of Judah had dedicated to the sun, at the entrance of the House of the LORD, near the chamber of the eunuch Nathan-melech, which was in the precincts. He burned the chariots of the sun. (2:23:11)1

I was wondering what horses symbolized with regards to Canaanite sun worship. Was it like the Greek belief that the sun was pulled around by a chariot with horses by Helios or Apollo during the day (as may be evidenced by the rest of the verse), or was there something else?

1 Just a couple of days ago I found out that at Tel-Motza a Judean temple had been found. The temple's entrance faced the east, where the sun rises and a horse statue had been found aong other items. I thought that perhaps this meant that this was a site of sun worship, similar to what's described in Ezekiel 8:16: "Then He brought me into the inner court of the House of the LORD, and there, at the entrance to the Temple of the LORD, between the portico and the altar, were about twenty-five men, their backs to the Temple of the LORD and their faces to the east; they were bowing low to the sun in the east." 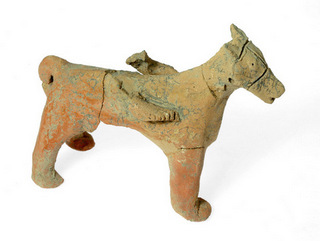 (Picture from the site of the Israeli Antiquities Authority)

This stems from the worship of Shapash (also called Shapsh, Shapshu or sometimes Shemesh), the Canaanite goddess of the sun. She is not to be confused with the Akkadian sun god, Shamash.

In the Epic of Baal, Shapash plays an important part in the plot, as she interacts with all of the main characters, and in the end she is favourable to Baal's position as king.

Worshiping Shemesh was said to include bowing to the east, in the direction of the sun, as well as rituals related to horses and chariots, which were associated with her.

The Book of Kings describes the prohibition of this worship by King Josiah. The Bible in general attempts to portray the sun non-anthropomorphically or as representing Yahweh's power. Shapash is usually substituted for euphemisms like or (light), and it appears that sun worship, even in an Yahwist way, was avoided at all costs.

Not the answer you're looking for? Browse other questions tagged symbolism bible sun canaanite or ask your own question.