Where are the three Maels of Meath?

The Tain fairly often specifies specific geographical locations as the settings for its events.

In the final battle of the Tain, Fergus is convinced to turn from the battle and expend his anger on the hills, to spare the men of Ulster.

Thus it was with that sword, which was the sword of Fergus: The sword of Fergus, the sword of Letè from Faery: Whenever he desired to strike with it, it became the size of a rainbow in the air. Thereupon Fergus turned his hand slantwise over the heads of the hosts, so that he smote the three tops of the three hills, so that they are still visible on the moor, and these are the three Maels ('the Balds') of Meath.

The meaning of Mael here seems to be "flat-topped hillock".

This takes place on a plain referred to as "the wide plain of Meath", which I would assume is somewhere around the historic Kingdom of Meath, and generally between Connacht and the Ulaid.

Does this story explain the creation of some known geographic feature?

irish ulster-cycle tain-bo-cuailnge
Share
Improve this question
edited May 20 '15 at 22:45

While it certainly seems to explain the existence of certain hills at the time, there isn't any known landmark to attach this event to.

The battle strongly appears to have taken place in Westmeath, between Athlone and Mullingar, but the hills in question don't seem to be identified.

After attempting collect a bunch of references to known locations of the Tain, I came across a recently written paper including maps explaining, and proposing changes to, the accepted route of the Tain: The Route of Táin Bó Cúailnge Revisited, by Paul Gosling.

Please do go take a look at the map labelled Figure 4 (I have intentionally not reproduced it here, per the Academia.edu licensing terms).

Some locations near the battle can be established clearly and easily:

At Ath Firdia, the Connacht army is making a bee-line back to Cruachan with their prize in tow (harried by Cuchullain along the way, of course). Accepted opinion seems to place the final battle squarely in County Westmeath, somewhere generally between the modern cities of Athlone and Mullingar. The paper fills in the established locations of the camps of Ulster and Connacht:

And the author gives one location as the most likely location of the battle, as well as giving mention to a second possible location posited in an older resource, supposed supported by local tradition:

The two are less than 10 km apart, so pretty close. No statement as to the hills in question though. A speculation can be found here or there, but nothing that seems worth crediting. It's not too hard to see the problem. The author of the above paper describes the surrounding areas as "gently undulating enclosed farmland". Indeed, taking a quick look at a topographic map of the vicinity: 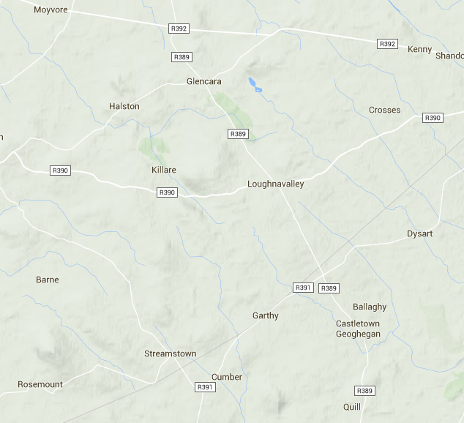 Which reveals not much going on. Ushnagh Hill seems to be the most dramatic hill in the area. It's the gentle incline just to the right of the "Killare" label on the map. The hill does appear to have quite a storied history, but I can't find any compelling reason to assume it is one of those mentioned in the story.

Not the answer you're looking for? Browse other questions tagged irish ulster-cycle tain-bo-cuailnge or ask your own question.

16
What happened to the Fir Bolg after Ireland was conquered by the Tuatha Dé Danann?
10
What reason, if any, is there for the exact number of men and women who went with Cesair to Ireland in the Lebor Gabála Érenn?
9
Is there any significance to Baile's Strand as the setting for Cúchulainn's duel with his son?
9
Why is it believed that characters from the Irish myth cycles were once gods?
12
Are all Celtic Gods (Irish, Welsh, Scottish, and British) considered part of the same pantheon?
8
Whence comes the association of Leprechauns with rainbows?
6
Where do Leprechauns live?
3
Are there recommended collection/translations of Irish mythology/folklore?