What is the origin of a common Christmas tree quotation concerning an old Babylonish fable about an evergreen tree?

Searching for "evergreen tree which sprang out of a dead tree stump" gets nearly 3000 hits.

The Seed of the Woman and the Power of Darkness - Donbor Syiemlieh - Google Books is an example:

"An old Babylonish fable told of an evergreen tree which sprang out of a dead tree stump. The old stump symbolized the dead Nimrod, the new evergreen tree symbolized that Nimrod had come to life again in Tammuz! Among the Druids the oak was sacred, among the Egyptians it was the palm, and in Rome it was the fir, which was decorated with red berries during the Saturnalia!" (Walsh, Curiosities of Popular Customs, p. 242).

Obviously I didn't check all results, but those that I did check contain that same quotation, and almost all give the same attribution.

The problem is, while page 242 of that book does talk about Christmas trees, and the writing style is similar, it doesn't include the above quotation or anything like it: 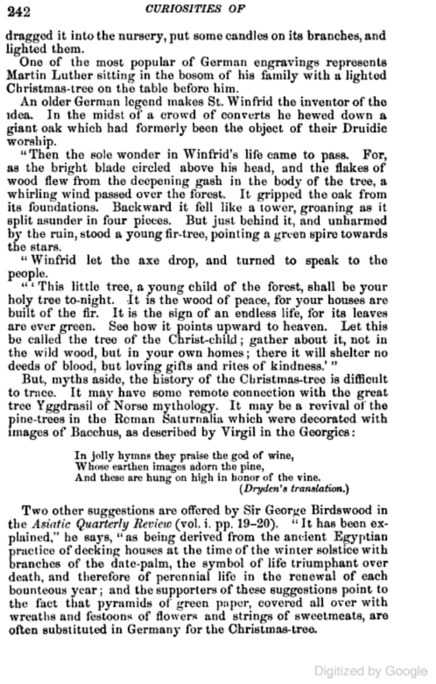 The quotation doesn't appear elsewhere in that section or anywhere else in the book.

So what is its origin?

This question has now been answered:

… those who attribute the quotation to Walsh are misattributing and/or misquoting.
The direct quotation originates with Ralph Woodrow, who paraphrases and cites, but does not quote, Walsh. … page 152 in chapter 20 of Woodrow's Babylon Mystery Religion.

This confuses two different concepts: the evergreen Tree of Life from Mesopotamian stories, and the origin of the Christmas tree tradition around the 25th of December, which is of other origins.

Let's start with the Tree of Life myths.

The Tree of Life myth is the most likely basis for much of Genesis' Garden of Eden myth. It is possibly derived from the Asherah and other Mesopotamian myths. In the Torah and Christian versions of the myth, Asherah, consort of Yahweh & "mother of all", becomes Eve, consort of Adam & "mother of all". There is ample historical evidence for this.

In the Kuntillet 'Arjud and Khirbet el-Kom inscriptions, Asherah is named with Yahweh - probably as his consort. In Canaanite myth, Asherah (Ug. Athirat) was the consort of El, the creator god, and she begat the seventy lesser gods, the sons of El. Asherah became Yahweh's consort through an identification of El with Yahweh (seen throughout the OT). In Canaanite texts, Asherah is called the "Mother of All" and one of her titles was qnyt 'ilm "Creator of the Gods". It is interesting that qnh is an unusual word in Hebrew for "create" as it usually means "acquire" (El, in contrast, was called bny bnwt "Creator of Created Things" in the Ugaritic texts). The notion of Eve as a creator goddess also appears in muted form in Genesis 3:20, 4:1 where Eve is called "the mother of all living" and Eve says after the birth of Cain, "I have created (qnh) a man with the help of Yahweh," employing the same verb as applied to Asherah in the Ugaritic texts. The latter quote is also very similar to a statement regarding the Akkadian creator goddess Aruru (= Sumerian Ninhursag):

Another clue that Eve's identity originally was not as it is given in the story can be found in the name: Hebrew chwwh, being related to Aramaic chwyh and Phoenician chwt "snake". Chawat appears in a Phoenician inscription as one of the names of Elat "Goddess", that is, Asherah.

It is in Proverbs where we meet Asherah as Wisdom personified. She appears as a creator goddess in Proverbs 8:22-31 and the following chapter describes a banquet that Wisdom hosts in her palace (Proverbs 9:1-6). In the Ugaritic texts, we read similarly of Asherah and her consort El hosting banquets in their mountain palace (cf. KTU 1.1 IV 26-35).

Proverbs 3:13-18 contains some paronomasia between the name Asherah ('ashrh) and the word "happy" ('ashre), which is paired with the "tree of life" in a chiasm:

The expression is nearly identical to "the tree of life" ('ts h-chyym) of Genesis 2:9, which refers to a specific mythological tree while the "tree of life" in Proverbs refers to a more abstract Wisdom, but the verse also plays on the name Asherah. It is interesting that Wisdom is identified with the "tree of life" when a "tree of knowledge of good and evil" (e.g. "wisdom") is distinguished from the Tree of Life in the Eden narrative. Many scholars since the time of Wellhausen have suggested that this second tree originated as a doublet of the first.

Let's now look at the origins of the Christmas tree

Long before Christianity appeared, people in the Northern Hemisphere used evergreen plants to decorate their homes, particularly the doors, to celebrate the Winter Solstice. On December 21 or December 22, the day is the shortest and the night the longest. Traditionally, this time of the year is seen as the return in strength of the sun god who had been weakened during winter — and the evergreen plants served as a reminder that the god would glow again and summer was to be expected.

The solstice was celebrated by the Egyptians who filled their homes with green palm rushes in honor of the god Ra, who had the head of a hawk and wore the sun as a crown. In Northern Europe, the Celts decorated their druid temples with evergreen boughs which signified everlasting life. Further up north, the Vikings thought evergreens were the plants of Balder, the god of light and peace. The ancient Romans marked the Winter Solstice with a feast called Saturnalia thrown in honor of Saturn, the god of agriculture, and, like the Celts, decorated their homes and temples with evergreen boughs.

Saturnalia was the most important celebration in Roman life. It was a week-long lawless celebration held between 17 and 25 December. In the early days of Christianity, the birth of Jesus was set at the last day of Saturnalia by the first Christian Romans in power to approach pagans, even though scholars assert Jesus was born nine months later. According to Luke 1:24-26, Mary conceived Jesus in the sixth month of Elizabeth’s pregnancy with John the Baptist. This means that Jesus was born 15 months after the angel Gabriel appeared to Elizabeth’s husband, Zacharias, and informed him that his wife would bear a child.

According to Luke 1:5, Zacharias was a priest of the division of Abijah. Luke 1:8 says that Gabriel appeared to Zacharias while he was serving as a priest in the Temple.

Fifteen months later would place the birth of Jesus in the seventh month of the Jewish calendar. That would be in the fall of the year, in either late September or early October. His conception, not His birth, would have occurred in December of the previous year.

Not the answer you're looking for? Browse other questions tagged folklore origins traditions christmas or ask your own question.