Were prehistoric fossils linked to mythological beings in ancient Greece?

This is a loading screen hint from the video game Assasin's Creed Odyssey:

Belongs in a museum. In antiquity, the discovery of prehistoric bones were sometimes linked to mythological beings, such as the Titans, Centaurs, or Cyclopes.

The idea seems entirely plausible, but do we have any actual evidence to support it?

In a glass case in the Boston Museum of Fine Arts, a strange creature lurks on an ancient Greek vase. This vase painting, made in the famous pottery center of Corinth in the sixth century B.C.E, is known to art historians as the oldest illustration of the story of the Monster of Troy, a creature described in Homeric legends. But the animal on this particular vase troubles specialists in Greek art, because it does not fit the typical monster image.The First Fossil Hunters: Dinosaurs, Mammoths, and Myth in Greek and Roman Times Adrienne Mayor

The tale of the monster of Troy was already old when Homer retold it in the 8th century B.C.E. In that legend, a fearsome monster suddenly appeared on the Trojan coast after a flood. (which could have cleared the fossil from the soil) It preyed on farmers near Sigeum. To appease the beast, the kings daughter Hesione was sent as a sacrifice, but before the sacrifice took place Hercules arrived and killed the monster.

The vase (pictured below) shows Hesione and Heracles confronting the monster; Hesione hurls rocks and Heracles shoots arrows at the monster. Hesione struck the monster 2 times in the mouth and under the eye, one of the arrows Hercules shot is lodged in the jaw of the monster. 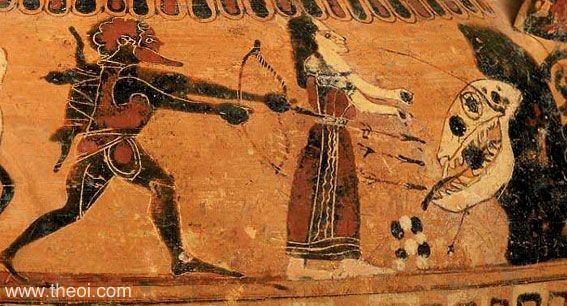 If you look at all the other figures on the vase you'll note that they are well rendered in sharp contrast to the crudely drawn white-headed monster. 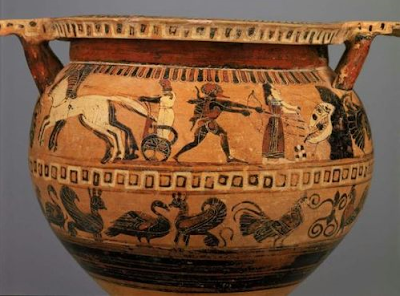 In his definitive 1987 article on sea monsters, art historian John Boardman singled out the poor artistic quality of this creatures shapeless, unworthy head gaping balefully from a rocky cave. Karl Schefold calls it a hideous white Thing, painted by a naive artist deficient in creative imagination. Vase scholars have assumed that the Monster of Troy should look like a typical sea monster even though the Homeric legend described it as a land creature. Most scholars take the dark background behind the odd, disembodied head to be a sea cave, although in a careful study of the scene, vase specialist John Oakley observed that the head protrudes from a rocky cliff, and Schefold noted that it is stuck to the cliff like a gargoyle.

This creature is certainly not a typical sea monster. Monsters of the deep were depicted by Greek artists as scaly serpents, lizards, or seahorse-like dragons with undulating bodies, ears, large staring eyes, a dorsal crest, and an upturned snout resembling that of a crocodile, shark, dog, or pig. But if we pay attention to the details and geography of the Homeric legend, and if we view this atypical Monster of Troy in its historical context, then its peculiar appearance begins to makes sense.

Right around the time the Spartans announced the discovery of the giant bones of Orestes in Tegea (560-540 B.C.E.)1. The painter of the vase would have lived in Corinth, a well know trade hub ,close to events in the Eastern Mediterranean. The vase shows the monster of Troy, which appeared at Sigeum on the Trojan coast.

That same coast was the scene of another Homeric legend about a pair of monsters that emerged from the cliffs of a tiny island (Tenedos) across from Sigeum. And it was at Sigeum that the colossal bones of the Homeric heroes Ajax and Achilles suddenly appeared in the Roman era (reported by Pausanias 2 and Philostratus. The sediments around Sigeum contain rich fossil deposits that continually erode out of the collapsing bluffs by the sea.

Now after looking at the facts, instead of a badly drawn monster coming out of a cave we can note a monster poking out of a cliffside. 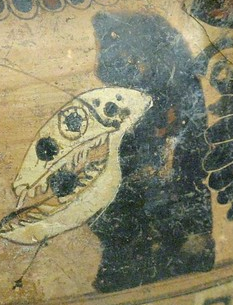 The great size of the white head, its shape, and the anatomical features suggest that a large fossil skull eroding out of an outcrop was the model for this earliest illustration of the Monster of Troy. Intrigued by this surprising possibility, I showed photographs of the Corinthian vase to several vertebrate paleontologists and asked them for their professional impressions.

The paleontologists immediately noticed realistic details missed by classical art scholars whose search image had led them to look for traditional artistic motifs instead of ancient natural knowledge. The paleontologists noted the jaw articulation, the hollow eye socket, the extended back of the skull, the forward-leaning teeth, and the natural detail of a broken-off premaxilla (upper jaw and nasal structures). They agreed that the general size and shape of the skull was consistent with that of a large Tertiary mammal emerging from an outcropping.

But two nonmammalian features, the ring of bony plates around the eye socket and the mouthful of jagged teeth also caught the paleontologists attention. The numerous teeth and lack of molars reminded some of them of a reptile or toothed whale skull. Eocene whale skulls are exposed around the Mediterranean, and the skulls of the giant Miocene giraffids, including Samotherium and Helladotherium, have large, forward-projecting teeth, which would be especially noticeable if the premaxilla were missing. Sclerotic eye rings are features of birds and dinosaur skulls, never mammals. Dinosaur remains are unlikely to have been observed around the Mediterranean, but the ancient Greeks were certainly familiar with the skulls of living birds. And they may have encountered fossil skulls of giant ostriches in Tertiary and Quaternary deposits across Anatolia and Greece. Ostriches are remarkable for having the biggest eye sockets of any terrestrial vertebrate.

when the pythia had ordered the Spartans to search for the bones of Orestes, they were not able to find them. Further enquiry at Delphi brought the instruction to look at Tegea in Arkadia "in a level place where two winds puff under mighty compulsion, blow is countered by blow, and woe lies on woe." There the son of Agamemnon was buried, and if they were to carry off his bones, they would be superior to Tegea. 1 In due course the Spartan Lichas, having been told by a smith at Tegea of large bones found by him in a coffin during the digging of a well, conjectured that they were the relics indicated by the Pythia, the smithy being the place described in her oracle. Pretending to be an exile from Sparta, he came back to Tegea, hired the yard where the well had been dug and carried the bones off to Sparta (Herodotus. book1 chapter 67 section 5 - chapter 68 section 6)

As Pausanias relates this story (already centuries old in his day, about A.D. 150), some bones of heroic size were acclaimed as the remains of the mythic hero Pelops sometime before the Trojan War (ca. 1250 B.C.). The big bones were kept in a bronze chest at the Temple of Artemis at Olympia. Pelops shoulder blade reputed to have magical powers was apparently displayed in its own shrine. In myth, Pelops was Heracles great-grandfather and a founder of the Olympic Games. As a youth Pelops had been chopped up and served to the gods as a grotesque sacrifice. But as soon as the gods realized what they were eating, they restored Pelops to life. His shoulder, however, had already been been eaten, so the gods replaced it with one of ivory. And it was this ivory shoulder blade that was enshrined at Olympia. Scholars have long tried to explain the mystery of Pelops ivory shoulder, comparing the sheen of ivory to radiant skin and so on. But if we take into account the great size of Pelops bone and its place of discovery, a more plausible explanation emerges.

The story of the huge shoulder bone made of ivory and stored at Olympia suggests that prehistoric remains from Arcadia contributed to the myth of the great eponymous hero of the Peloponnese. Olympia is on the Alpheios River: the surrounding valleys contain dense concentrations of the bones of large Pleistocene mammals, including mammoths. Shoulder blades and thigh bones are large, durable, and easily recognized mammal bones and they convey an immediate sense of a creature size. These two bones each had a special meaning in ancient Greek rituals, according to Walter Burkert, a scholar of Greek religion. The shoulder blade in particular played a prominent role in sacrifices and in foretelling the future. An impressive mammoth scapula would certainly stand out in a fossil bone assemblage, and its dimensions would match the ancient search image for mythical heroes who towered over present-day men.

Very old bone strongly resembles ivory, especially when polished, says Kenneth Lapatin, an authority on ivory in antiquity. If people of early antiquity found a semifossilized shoulder blade that looked human but dwarfed a man, it easy to imagine that they might burnish it to bring out an ivorine quality and might revere the bone as that of their mighty hero Pelops. Once polished and displayed, the bone would inevitably accrue stories to explain its special appearance and origins. And the stories would in turn make the relic that much more valuable, worthy of special treatment. Burkert and Lapatin findings thus help us to explain how a huge ivory shoulder blade came to be incorporated into the myth of Pelops, and why such a relic would have deserved its own shrine.

Pausanias Noted the huge bone of a sea-monster:

From here is a way to a sanctuary of Asclepius. On passing into the enclosure you see on the left a building with two rooms. In the outer room lies a figure of Sleep, of which nothing remains now except the head. The inner room is given over to the Carnean Apollo; into it none may enter except the priests. In the portico lies a huge bone of a sea-monster, and after it an image of the Dream-god and Sleep, surnamed Epidotes （Bountiful）, lulling to sleep a lion. Within the sanctuary on either side of the entrance is an image, on the one hand Pan seated, on the other Artemis standing. Pausanias, Description of Greece book 2 chapter 10

Now a huge bone may mean several things but the fact he mentions a sea-monster indicates it was clearly huge and certainly not human. unfortunately I cannot say with certainty that it is a fossil but I think it deserves an honorable mention.

most of this information comes from The First Fossil Hunters: Dinosaurs, Mammoths, and Myth in Greek and Roman Times by Adrienne Mayor

Due to extensive travel, Greeks and Romans discovered fossils throughout the Mediterranean and into India (Mayor, 2000b, p. 8). The fossils of dinosaurs, mastodons, mammoths and other creatures were pervasive parts of the natural landscape in the Greek and Roman periods, helping to account for why Greeks and Romans developed mythologies about giant creatures as they sought to understand the presence of these remains

Not the answer you're looking for? Browse other questions tagged greek paleontology or ask your own question.

14
Were Sirens humans or Monsters?
16
Did ancient Greek religion ever become monotheistic?
5
Who were the beings that the Titans overthrew to gain power on Olympus?
11
Who were Aphrodite's parents?
4
Are aakors mythological or copyrighted?
9
Odysseus raid on the Cicones at Ismaros (Odyssey Book 9 lines 40-66)
6
How were titans viewed by ancient Greeks?