Who is the figure holding a cross next to Christ fallen with the cross in the statue at Budapest 2, Pasaréti tér?

Christian iconography question. This is about a 1936 life-sized statue of Jesus Christ fallen beneath the cross, by sculptor Somló Sári. The statue is at Budapest 2. ker. Pasaréti tér, next to the Franciscan roman catholic church of Pasarét dedicated to Saint Anthony of Padua, in a fenced garden next to the bell tower.

The statue depicts another men besides Christ. This second figure is holding what looks like a flail in his right hand, ready to strike Christ. Who is this second figure? 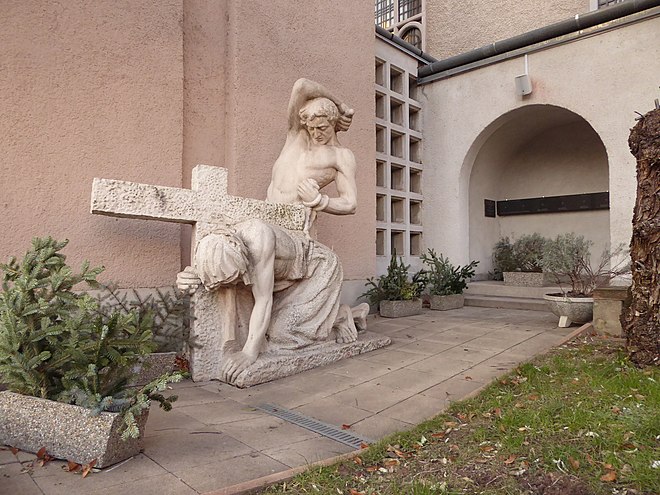 I expect that this question is answerable because Catholic mythology concerning Christ's passion is as detailed as the expanded universe for the original Star Wars movie trilogy. Every character and inanimate item encountered has not only a name, but also a also book-length back story. We know about the two criminals who were on the cross next to Christ, about the soldiers who verified that he's dead, etc. A person who stands next to the fallen Christ with a flail seems significant enough that he must have a definite identity.

(Cross-post from hu.Wikipedia reference desk, where I didn't get an answer.)

This seems like a depiction of either the third, the seventh or the ninth station of the Way of the Cross, called "Jesus falls for the first/second/third time". The scene often includes a soldier or a civilian pulling Jesus with a rope and beating/whipping him, see for example this painting by Martin Feuerstein: 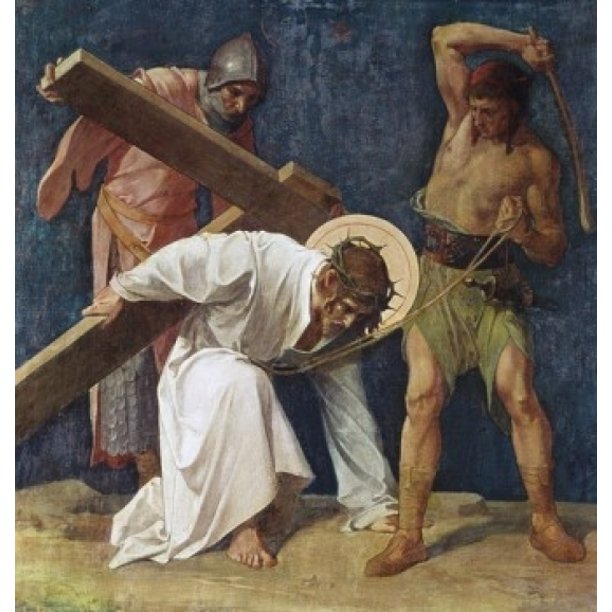 The scene does not appear in any of the Gospels (you can check them here: Matthew 27, Mark 15, Luke 23, John 19), and in fact, only John has Jesus carrying the cross himself. Since it is not based on the scriptures, but rather on popular tradition starting in the late Middle Ages, the iconography of the Way of the Cross can vary a lot, and no details are given about minor albeit recurring characters like the one you are asking about.

By contrast, we know more about Longinus and the two thieves because they are mentioned in the Gospels, and they are even given names in the apocryphal Gospel of Nicodemus.

Not the answer you're looking for? Browse other questions tagged christianity iconography or ask your own question.