Are there any accounts of how Hera, Demeter, and/or Hestia conducted themselves in combat?

Hera, Demeter, and Hestia are said to have fought alongside their brothers Zeus, Poseidon, and Hades in the war against the Titans.

To the modern imagination, it's easy to picture Demeter functioning like DC's Poison Ivy in a fight, commanding plants and vines against her enemies. Similarly, Hestia was a fire goddess, so her utility in combat isn't difficult to understand. Hera is a little more vague, being almost entirely domestic in her domain, though she prepares for battle alongside Athena in the Iliad before being stopped by Zeus, implying that she's decent with weapons.

But these are all deductions. Are there any explicit accounts of those three goddesses engaging in direct combat of any kind against mortals or supernatural beings, anywhere in Greek mythology?

Of the three sisters Hera is the only one regarding whom I have found mention of her direct involvement in a narrated fight scene.

In Book 36 of Nonnus' Dionysiaca,1 the Olympian deities square off against one another in a battle during the war waged by the young wine-god Dionysos [Dionysus] against his kinsman King Deriades of India. Lines 28-82 thereof relate the confrontation between Hera, on the one hand, who supports Deriades; and, opposing her on the other hand, Artemis, who is there to back up her own half-brother Dionysos.

Armed with a bow and arrows, Artemis fires everything she's got at Hera. Before the first arrow reaches the queen of the gods, however, Hera has fashioned herself a makeshift shield by grabbing a nearby cloud and compressing "it around her shoulders". When Artemis's volley is over, the cloud is "covered thick with arrows all over." Nonetheless "the arrows were stuck in the dark cloud, but the veil was untorn..."

Then Hera picked up a rough missile of the air, a frozen mass of hail, circled it and struck Artemis with the jagged mass. The sharp stony lump broke the curves of the bow. But the consort of Zeus did not stop the fight there, but struck Artemis flat on the skin of the breast, and Artemis, smitten by the weapon of ice, emptied her quiver upon the ground.

Hera then spends the majority of the rest of the passage belittling and disparaging Artemis, who, "discomfited and drunken with fear", is then briskly swept off the battlefield by her twin brother Apollon [Apollo].

Like much of the rest of the Dionysiaca, Nonnus is pointedly imitating Homer's Iliad with this scene and the whole battle in general, which he has based on the fight among the Olympians in Iliad 20 & 21.

Artemis cuts a much more pathetic figure in Homer, and her only role in the Iliad seems to be showing up so that her stepmother can slap her around. Iliad 20.70 sets the scene simply by saying that Artemis “stood forth” against Hera while other deities are about to clash. We eventually return to the two goddesses in the next book, where Apollon reveres their uncle Poseidon too much to fight against him.

Artemis calls Apollon out on this, since her twin had previously boasted about facing off against the sea-god. But no sooner has she done this than Hera tells her off for daring to step to the queen of the gods.

"But if that's your idea, to vie with me in strength, then let this teach you who is stronger."

So saying, she seized the other's wrists in her left hand, snatched Artemis' bow and quiver from her shoulders and, laughing all the while, boxed her on the ears with the weapons as she writhed, scattering the winged arrows. Artemis fled weeping from her... She took her tears with her, but left the bow and arrows where they lay.2

According to Iliad 5.392, "Hera, too felt the agony, when the mighty Herakles [Hercules]... pierced her right breast with his triple-barbed arrow."

The A scholion on this line elaborates that this occurred during Herakles' vengeance campaign against his cousin King Neleus of Pylos, a battle in which Neleus was supported by certain of the gods, including his own father Poseidon, his uncle Hades and his aunt Hera. Herakles was, in his turn, supported by his own father Zeus and his half-sister Athena. Hades and Hera were both grievously wounded by Herakles, while Neleus and nearly all of his sons were killed.

Presumably supplying an alternate occasion for Hera's violent encounter with her super-strong stepson, Ptolemy Hephaestion says "that Hera was wounded on her right by Herakles" while she was fighting on the side of the triple-bodied giant Geryones when the hero came to rustle the giant's cattle as his tenth task.

Beyond sustaining an injury, however, we have no details about how Hera fared in whichever battle it is she's supposed to have contended with the great hero.

In a rather more passive role, Hera appears in Apollodorus' Library 1.6.2 where she gets used as a pretty bizarre form of bait in a battle in which, for a change, Hera and Herakles are fighting on the same side.

During the Giants' attack on the home of the gods on Mt Olympos [Olympus], one of their leaders, named Porphyrion, attacked Herakles and Hera. For whatever reason, "Zeus instilled him [Porphyrion] with a passion for Hera, and when he tore her robes and would have raped her, she called for help, whereat Zeus smote him with a thunderbolt and Herakles shot him dead with an arrow."

Based on that text alone it doesn't sound much like Hera was even in the actual fray to begin with, but apart from mythography we also have artistic testimony to her participation in the Giants' War.

An Attic red-figure amphora, currently in the Musée du Louvre in Paris, France, depicts this war. 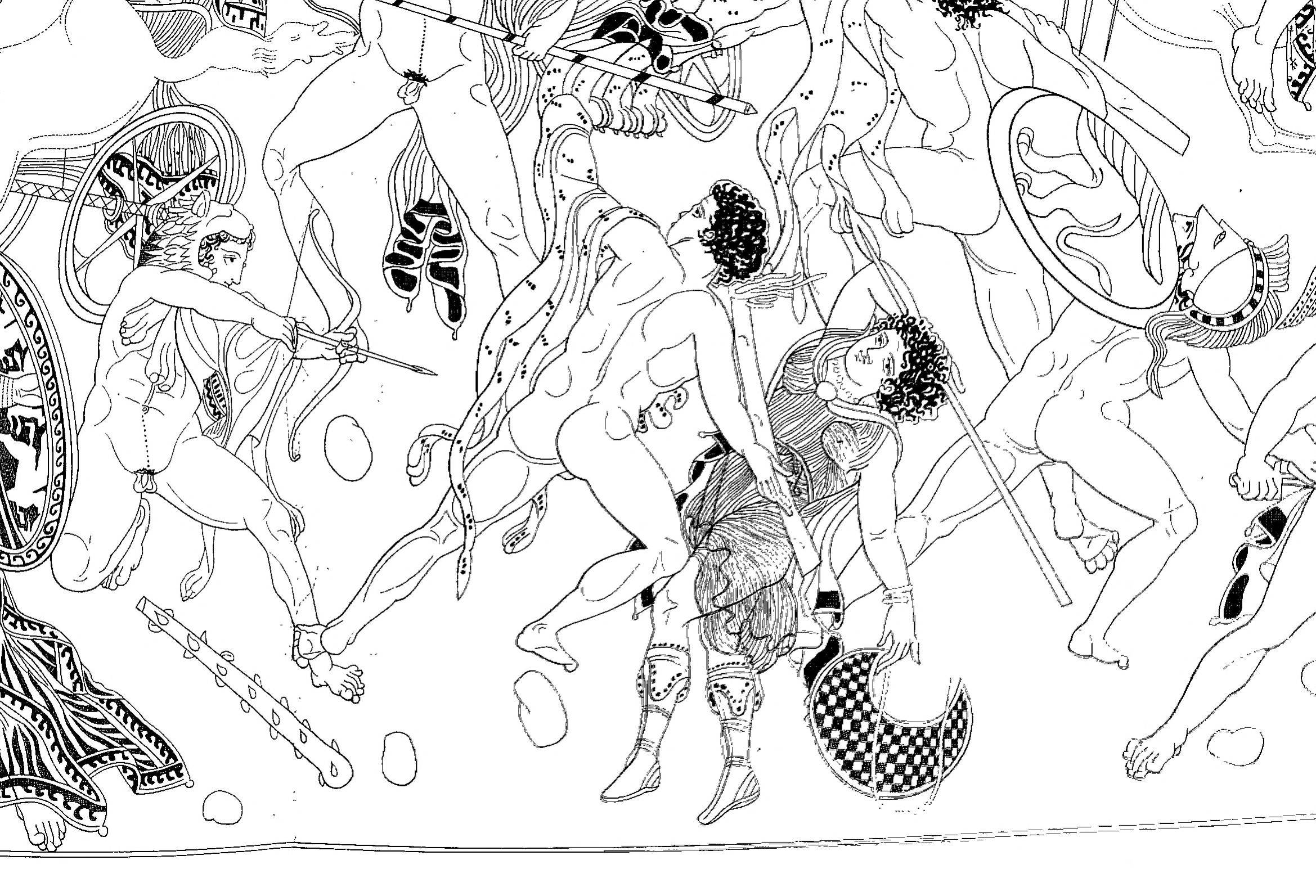 The above scene is a detail thereof,3 described as follows by Theoi.com, wherein

the lust-filled Porphyrion seizes the goddess Hera, ripping her dress. The goddess' spear is cast awry and her Amazon-crescent shield seems to slip from her fingers. Porphyrion, draped in a panther skin and holding a torch, turns to face Zeus (above, not shown). The god aims his lightning bolt at the giant. To the left Heracles also comes to the rescue, aiming an arrow at the giant.

Hera is generally otherwise attacking Giants in portrayals of the battle between them and the Olympians. 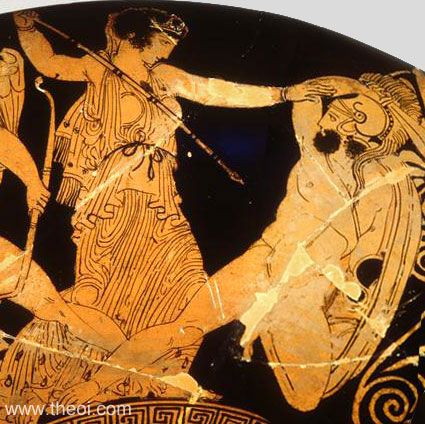 Here (above) she is, on an Attic red-figure kylix (now in the Antikensammlung Berlin),4 about to skewer the Giant Phoitos with a spear. 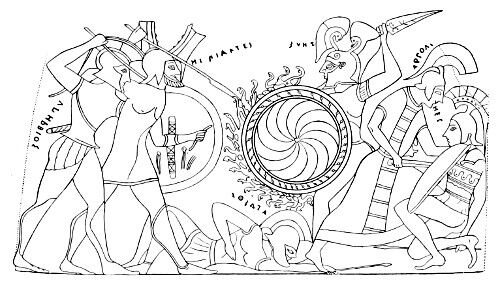 On the right-hand side edge of this sketch (above)5 of a black-figure amphora from Caere (now at the Louvre), the Giant Harpolykos is being stabbed with a knife by Hera.

Only bits and pieces of the goddess survive from the East Frieze of the Altar of Zeus at Pergamon where she is portrayed in a chariot with her daughter Hebe as their horses and vehicle are trampling one of the Gigantes beneath them. According to the Second Vatican Mythographer, Juno (the Roman equivalent of Hera) rode in a chariot and used a spear, although this is not in the context of any fight scene.

On p. 455 of Early Greek Myth: A Guide to Literary and Artistic Sources,6 Timothy Gantz describes a Pontic amphora (now at the British Museum in London) which shows "Herakles squared off in single combat against a woman armed with spear and shield who is... very likely Hera, sporting a goat horn extending from her cap" or from her head (apparently an attribute of Juno Sospita in Etruscan and early Roman art).

Of what I have found, the closest to Demeter appearing explicitly in a fight scene in writing is in the late Roman poem by Claudian, namely the Rape of Proserpina, in which Ceres (the Roman Demeter) heads out in search of her abducted daughter Proserpina (the Roman version of Persephone).

Coming to the slopes of Mt Aetna on the island of Sicily, she seeks out timber from which to fashion flaming torches to light her way, at which point, "with angry hand she brandishes her axe, ready to strike Jove [i.e. Zeus] himself." As she is all alone in the scene, however, no such dramatic occurrence takes place and indeed all she does is create her torches before setting off on her journey.

So once again it falls to the ancient artwork to provide us with the pertinent information. The same amphora at the Louvre which displays Hera being attacked by Porphyrion also contains Demeter assailing a Giant with a spear and, as it happens, with a flaming torch as well. 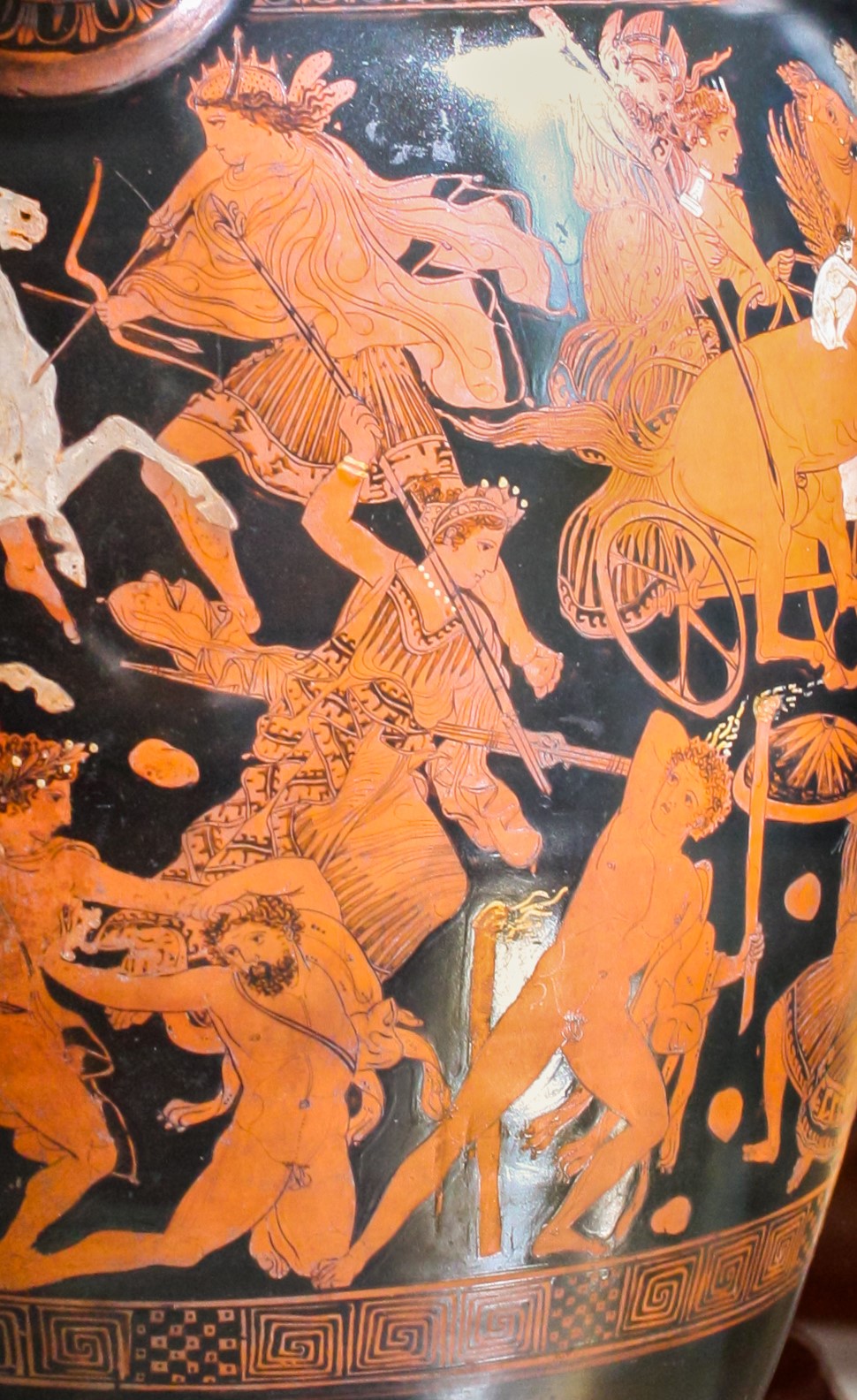 She is the female figure at the centre of this image,7 looking like she's about to use the butt of her spear to pommel the Giant upon whom she's descending while gripping a lit torch in her left hand (which, depending on how one might interpret it, perhaps she has just used to set the Giant's hair on fire).

Virtually nothing remains of the goddess from the large Gigantomachy sculpture on Zeus's Pergamon Altar, but Francis Queyrel interprets some bits and pieces as Demeter using a pair of torches against a Giant named Erysikhthon.

The Homeric Hymn to Demeter addresses her as Khrysaoros, meaning She "Of the Golden Blade," likely referring to a curved sword or a scythe. Theoi.com claims that the goddess "was depicted in scenes of the... War of the Giants... wielding a sword, which may have been the golden blade; or the blade might instead be a golden sickle which she used to harvest the first crops of wheat." I have not seen, however, any ancient depiction of Demeter with such an implement.

As it turns out, by the way, the original DC-Poison-Ivy character in Greek mythology, would actually be Dionysos rather than Demeter. The goddess is never described using vines and plants to attack opponents, but this is standard when it comes to Dionysos. As a matter of fact, uncannily rapid-growth ivy (maybe not necessarily the poison variety thereof) is one of his favourite weapons of choice.

The extremely domestic deity among the three sisters in view here, rather than Hera, would be Hestia. As opposed to simply fire in any form, she is the personification of the decidedly non-violent and closely controlled flames used to cook food and to warm the house.

She barely features in any myths at all and the only certainty we seem to have about her participation in the Titans' War is Hesiod's statement in Theogony 667 that all of Kronos's children, "both male and female," fought in the war against their own father.

Unsurprisingly, Hestia does not feature in any battle-scene artwork like her sisters do.

Not the answer you're looking for? Browse other questions tagged greek goddesses hera demeter hestia or ask your own question.