How did the Monkey King (Sun Wukong) go from fictional character to religious icon?

Sun Wukong, the Monkey King, seems to have got his start as a fictional character in the classical novel "Journey to the West" by Wu Cheng'en (though I have read a vague statement somewhere that earlier stories of a monkey assistant to Xuanzang may have existed).

Today, he seems to have transitioned to a religious figure, outside the context of the novel, with his birthday celebrated in September in the "Monkey King Festival".

J. Gordon Melton's Encyclopedia of Religious Celebrations presents the following brief accounting of the establishment of the Sun Wukong as a religious figure:

Monkey King is a minor Taoist figure appearing in a Buddhist novel. The novel, however, had the effect of elevating him to a high status, at least relative to popularity. Thus, in the wake of the novel's popularity, Monkey King temples began to appear, and a biography constructed.

What novel is this (certainly not Journey to the West, the article already covered that, and calling him a minor figure in that novel would be grossly inaccurate)? And what does this phrase "a biography constructed" mean? Does this refer to some sort of official state, or religious, biographical document that describes a recognized religious figure?

To expand on @plannapus' answer:

Chinese folk religion or Taoism doesn't worship Sun Wu Kong (孫悟空) per se, but rather a monkey deity usually referred to as the Great Sage (大聖) or Heaven Rivaling Great Sage (齊天大聖). Historically, this has been particularly prevalent in Fukien, but stories similar to Sun Wu Kong's backstory can be found in several regions. This predates the c. 1592 Journey to the West, but the popularity of that novel furnished the traditional monkey deity with a standardised (sort of) backstory and the name Sun Wu Kong.

Roots of the modern monkey deity worship certainly predates the late 16th century fictional work, however. From about the late Yuan dynasty, elements of traditional folklore were incorporated into fictional works. A play by the Mongolian playwrite Yang Jing-xian, confusingly also titled Journey to the West, contains an autobiographic line by a certain "Itinerant Monk Sun" (recycled into the much later novel as a common title for Sun Wu Kong):

Note that here, Xuanzhong's monkey companion has a name (Heaven Reaching Great Sage) that's different form its usual modern version (Heaven Rivaling Great Sage). Both names do however appear for the monkey brothers in contemporary works such as the play 二郎神鎖齊天大聖 or the novella 陳從善梅嶺失渾家. They are also found in an archaeological site on Baoshan mountain in Shunchang, Fukien, known as the Twin Sages Tomb. it's located near the Southern Heaven Gate, a temple first built in 1391 and rebuilt in 1548, which some scholars argue are the upper and lower bounds for the tomb's age. 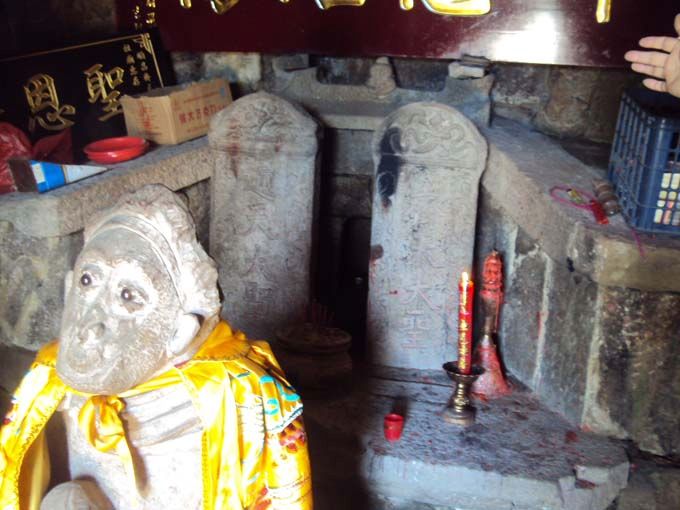 On this basis it is thought that the Journey's character of Sun Wukong - and the monkey deity - is in fact an amalgamation of both Great Sages and their sister, Wu Zhiqi. That is in fact a considerably more ancient name, tracing back to at least ninth century. During the Tang Dynasty, Li Gongzu, a fantasy novelist who penned the famous Governor of Nanke, wrote that:

While trying to control the flood, Yu came to Tongbai thrice ... [there he] captured the river god of Huai. It is named Wu Zichi and shaped like a money, with a sunken forehead and tall nose, a green body and white face, golden eyes and white teeth ... With a chain tied around his neck, [the monkey] was imprisoned under the Turtle Mountain of Huai.

While it might only be his own fictional invention, the story was collected into 戎幕閒談, a compilation of strange tales by the Tang writer Wei Xuan (韋絢), as the explanation for a supposed incident he heard:

A fisherman was fishing by the Turtle Mountain at night. His hook was caught on something and would not budge. Knowing how to swim, he dived in 50 yards, and saw a seemingly endless, large iron chain surrounding the foot of the mountain. He reported what he saw to the governor, who sent dozens of swimmers and more than 50 bulls to pull the chain out. There was no wind at the time, but to the shock of bystanders huge waves formed on the river. At the end of the chain, there was a beast, shaped like a monkey/ape, white faced and long moused, white teeth and golden eyes. He stumbled onto the shore, some five yards tall, moving like a monkey but with his eyes closed ... [after a while] his eyes suddenly opened, looking around like lightening, and looked around like he's about to go on a rampage. Everyone started running off, and he slowly walked back into the water, dragging the bulls with him, and vanished.

Furthermore, the Tang scholar Li Zhao records in his Addendum to Tang Histories (唐國史補) that:

A fisherman from Chu found an old iron chain in the Huai River. He pulled on it but it went on endlessly, so he reported it to the government. The governor gathered many men to pull. At the end of the chain, a green monkey lept out of the water, then vanished. Consulting the Classics of Mountains and Seas found a passage saying: A water beast was being a pest, and Yu locked it under the Jun Mountain. Its name is Wu Zichi.

The Classics of Mountains and Seas cited in the last passage is an ancient bestiary that dates back as far as the fourth century B.C., but the extant versions do not contain this supposed quote. It is quite possible that this part is a fabrication - citing old documents lend credence to the story. Nonetheless, the numerous references to the story suggests that, while the specifics might be inventions of writers, the idea of a monkey river god was an established concept in Chinese folklore.

Moreover, there are obvious parallels with the Sun Wukong character from the Journey to the West. The imprisonment under a mountain is particularly notable, and the physical description of the monkey Wu Zichi's golden eyes is an obvious precursor to Sun Wukong's fabled true seeing Flaming Eyes and Golden Iris (火眼金睛). These similarities are why Wu Zichi is widely considered the origin of Chinese folk religion's monkey deity, the Great Sage.

An alternative school of thought argues that the Great Sage was inspired by the Hindu monkey god Hanuman. Whether a native Wu Zichi absorbed influences of Hanuman, or whether Wu Zichi itself was inspired by Hanuman, is a matter of some scholarly debate. Regardless of the true sequence of events, a tradition of a monkey deity most likely found itself transplanted from India into China. An (originally) Tang era Hindu-Buddhist Kaiyuan Temple at Zayton contains a stone mural widely considered to depict Sun Wu Kong. 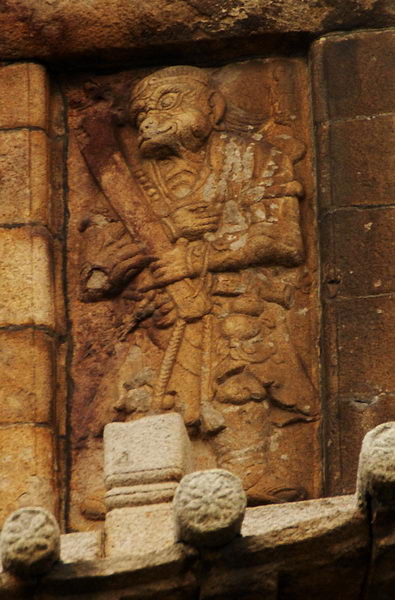 (泉州開元寺仁壽塔 - Renshou Pagoda, rebuilt in 1237, at the Kaiyuan Temple, Fukien.)

This "Itinerant Monk Sun (Monkey)", as the mural is often called, predates Journey to the West by centuries.

Since the Ming Dynasty, Fukien has been a primary source of Chinese emigration and colonialisation. Unsurprisingly, veneration of the monkey god was transplanted by Hokkien settlers to Taiwan and South East Asia by Hokkien settlers.

From the original, historical account of the pilgrimage of Xuangzang (i. e. The Great Tang Dynasty Record of the Western Regions) supposedly compiled in 646 AD to Wu Cheng'en's Journey to the West written during the 16th Century, there have been several novels relating the same story.
The english translation of Journey to the West by WJF Jenner contains in the foreword a detailed account of the known versions of that story. The earlier account including Sun Wukong seems to be from the Song Dynasty (960-1279):

The character of Monkey first appears in the stories as one of Xuanzang's escorts on his mission in the Song Dynasty, becoming an almost universal participant in the expedition during the following Southern Song Dynasty. In an extent printed storyteller's prompt book of the Southern Song Dynasty, titled The Tale of How Sanzang of the Great Tang Dynasty Fetched the Scriptures, Monkey appears among Xuanzang's companions in episodes such as The Mountain of Flowers and Fruit, Slaying the White Tiger Spirit, Expelling the Dragon Kui, Overcoming the Deep Sand God and Stealing and Eating the Peach of Immortality. Although the characterization is somewhat coarse and unimaginative, Monkey is from then on a permanent fixture in the framework of the stories.

There are several theories on where does this character come from, the main theories being that he derives from the indian monkey-god Hanuman, or that his roots can be found in the Fukien cult of Ch'i-t'ien Ta-sheng, some link Sun Wukong with the monkeys worshipped in Lingyin Si, etc.

Whichever theory is correct, it seems that the path Sun Wukong followed is not actually from fantasy novel to mythology/folklore but instead from mythology to novel, and then only to mythology/folklore again. And whichever theory is correct, the fact remains that the post-Journey to the West Sun Wukong and whichever monkey-god he originally was are significantly different, as he was completely reshaped by the novel(s).

Concerning the novel to mythology transition, here is what Whalen Lai (1994) says about it in Protean Ape to Handsome Saint: the Monkey King:

We scholars may think of Monkey as nothing more than a literary creation, but the common folk of China know better. To us, a text is just a text, but to them Journey is more than fable: it tells of reality. The Sage Equal to Heaven is a living reality, as real as St. Christopher is to an old-time Catholic. As St. Christopher still protects travelers, Monkey still answers prayers. Monkey has his own temple; he was worshipped and prayed to as a god by the history-making rebels of the Boxer Rebellion. This Great Sage is still present to those who have eyes to see and ears to hear.

Actually, in summary, he was worshipped in ancient China, or even across asia under the title Qi Tian DaSheng even before Journey to the west was written. The god was basically adapted into a novel rather than the other way around. Check out this documentary of his temples: https://youtu.be/bCS_UQx7kyU

Not the answer you're looking for? Browse other questions tagged chinese journey-to-the-west or ask your own question.

7
Did the dragons of Chinese mythology originate from tornadoes?
6
What do all the treasures Sun Wukong got from the Dragon Kings do?