In The Wicker Man (1973), the Mayday procession is headed by three masked characters: 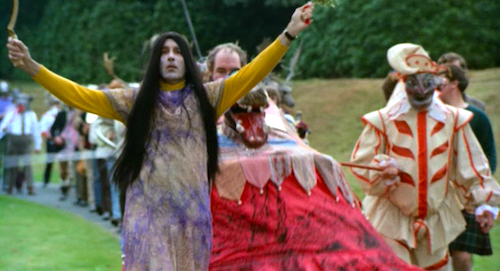 Their cast includes many alarming characters:
A man-animal, or hobbyhorse,
who canters at the head of the
procession charging at the girls;
A man-woman, the sinister teaser,
played by the community leader or priest;
And a man-fool, Punch,
most complex of all the symbolic figures -
the privileged simpleton and king for a day.
Six swordsmen follow these figures...
and at the climax of the ceremony
lock their swords together...
In a clear symbol of the Sun.
In pagan times, however, these dances
were not simply picturesque jigs.
They were frenzied rites ending in a sacrifice
by which the dancers hoped desperately
to win over the goddess of the fields.
In good times, they offered produce
to the gods and slaughtered animals,
but in bad years, when the harvest had been poor,
the sacrifice was a human being.
In some cultures, it would be the king himself.
In others, the most beloved virgin.
Very often he or she would be kept hidden
for months preceding the ceremony,
just as the Sun is hidden
from the Earth in winter.

I would like to know if these are real characters from the Celtic mythology or they were just made up for the movie. If yes, do they have formal names and what is the symbolic meaning of those characters beyond what was said in the movie?

These three characters are recurring in various mummer or guiser plays. These are old traditional folk dance/theatrical rituals which are known to have been performed at least as early as in the Middle Ages, though it's not known exactly how the plays/dances looked back them. But the versions that are still performed are documented at least in the mid-1800's.

Although usually broadly comic performances, the plays seem to be based on underlying themes of duality and resurrection and generally involve a battle between two or more characters, perhaps representing good against evil. Usually they feature a doctor who has a magic potion which is able to resuscitate a slain character. It is interesting to note that even though the quack doctor performed witchcraft in a largely catholic country, he was still a widely accepted and beloved character. Early scholars of folk drama, influenced by James Frazer's The Golden Bough, tended to view these plays as debased versions of a pre-Christian fertility ritual, but some modern researchers discount this view preferring a late mediaeval origin (for which there is no evidence either).

There are as many versions of the plays as there are places where they're performed, possibly more. But in their essence they are about death and resurrection, and they are performed at times of renewal such as the New year, the harvest or May Day/Beltaine (as in the movie).

The three characters are, as described in the movie quote in the question:

The quote in the question is from a scene where Sergeant Howie finds a book describing these characters and reads from it aloud, while the viewer can see the pictures in the pages of the book.

(If you're interested in seeing a different take of the characters, Ngaio Marsh wrote a detective story set around a particular version of the Guiser play/sword dance, which describes the characters used in that dance in great detail. It's called "Off with his head". It was after reading that book that I started learning about the tradition.)

Well, the movie's culture is purportedly based on Celtic paganism. Mostly gods were worshiped locally in this tradition. Epona is a rare exception: 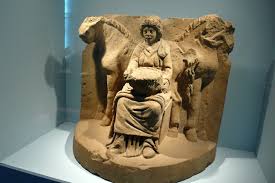 Epona is a unusual case of a pagan Celtic god that received widespread worship, to the point she was even incorporated to some degree into the Roman pantheon. She is a goddess of fertility and protector of horses. The man dressed as a woman shown above is holding a sickle and a plant of some kind. A Cornucopia, patera, or grains would be more iconic, but an implement of argiculture, and a plant do seem to speak of fertility symbolism.

As protector of horses, she is usually depicted alongside them, so the horse figure may be simply a part of her representation (perhaps with the creepiness turned up to 11 for cinematic effect).

Epona is a fitting leader of the procession, as it is a ceremony to ensure a bountiful harvest in the coming year.

As far as the fool, seems certainly to be a representation of Punch, a fool who has been appearing in slapstick comedy acts for centuries. It's a nice poetic turn, considering who is behind the mask, but I don't think there is any deeper identity than Punch.

Not the answer you're looking for? Browse other questions tagged celtic rituals or ask your own question.

15
Worship of Epona in the Roman Empire
17
Are elves born on the moon?
18
Why would slaves be sacrificed after their master's death?
4
Who is the father of the Tuatha Dé Danann?
5
Which Celtic god is the equivalent of the Roman Dis Pater?
4
How would a body be prepared for the Greek afterlife?
4
Why thank the person who is cutting out your heart?
8
Are there any old religions/mythologies where people would get tattood to get closer to or for their god?