Who is the sword juggler in the Gylfaginning?

In chapter 2 of the Gylfaginning, Gylfe is lead to Odin (in the form of High, Just-as-High, and Third) by a nameless sword juggler:

In the door of the hall Gylfe saw a man who played with swords so dexterously that seven were in the air at one time. That man asked him what his name was. Gylfe answered that his name was Ganglere; that he had come a long way, and that he sought lodgings for the night. He also asked who owned the burg. The other answered that it belonged to their king: I will go with you to see him and then you may ask him for his name yourself. Then the man turned and led the way into the hall. Ganglere followed, and suddenly the doors closed behind him. There he saw many rooms and a large number of people, of whom some were playing, others were drinking, and some were fighting with weapons. He looked around him, and much of what he saw seemed to him incredible. Then quoth he:

Gates all,
Before in you go,
You must examine well;
For you cannot know
Where enemies sit
In the house before you.

He saw three high-seats, one above the other, and in each sat a man. He asked what the names of these chiefs were. He, who had conducted him in, answered that the one who sat in the lowest high-seat was king, and hight Har; the other next above him, Jafnhar; but the one who sat on the highest throne, Thride. Har asked the comer what more his errand was, and added that food and drink was there at his service, as for all in Har's hall. Ganglere answered that he first would like to ask whether there was any wise man. Answered Har: You will not come out from here hale unless you are wiser.

Who is the sword juggler? Is he another god, or perhaps yet another form of Odin?

The supposedly nameless sword juggler is a well known figure in the Norse mythology. He's the son of Odin and Frigg, and is the messenger of the gods. 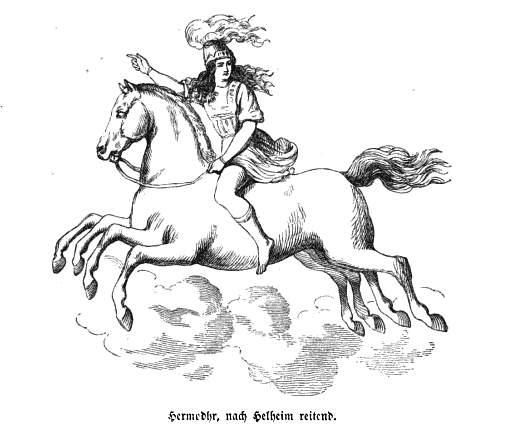 His name is Hermod or, Hermóðr the Brave.

The version of the story referenced in the question does not reveal the name of the juggler. However, in The Norse Myths by Heilan Yvette Grimes (ISBN: 9781879196025), the name of the sword juggler is openly said.

Here's the extract about the aforementioned scene from the book:

Not the answer you're looking for? Browse other questions tagged norse gylfaginning or ask your own question.

8
Who fathered Gefjun's ox sons?
20
Does Odin choose who enters Valhalla?
8
Why is Vidar silent?
13
Why does Óðr (Oder) travel away from Freyja?
9
Why is Gylfe trying to deceit his way into Asgard?
7
Significance of Gylfi's choice of pseudonym
8
When did Odin and Loki became blood brothers?
4
Who is the boatman that took away Sinfjotli's corpse?
5
Why does Sigurd reveal himself to Fafnir?
6
Is Odin Thor's father?