Why are the Wondjina mouthless?

Wikipedia proposes two explanations for why the Wondjina are typically depicted without mouths:

Common composition is with large upper bodies and heads that show eyes and nose, but typically no mouth. Two explanations have been given for this: they are so powerful they do not require speech and if they had mouths, the rain would never cease.

However the article provides no source for either theory. Is there a story that explains why the Wondjina are mouthless?

There are a number of explanations that have been provided for it. It seems that which is correct depends on the location and storyteller.

Attempting to come to a single conclusion that can be generally agreed upon seems to be impossible:

The attempt to find a tradition what is recognized by the whole tribal community has unfortunately come to nothing.
Sterbende Welt in Nordwest-Australien by Helmut Petri

And there is a strong indication that some areas or storytellers simply do not offer an explanation of the phenomenon:

Both authors [Elkin and Love] also investigated why Wanjina paintings lacked mouths, and whether they were depicted wearing clothing. Neither obtained any clear rationale for the Wanjina’s lack of a mouth.
Wanjina: Notes on Some Iconic Ancestral Beings of the Northern Kimberly by Kim Ackerman

The facts available from the wikipedia article, that they are so powerful as to not require a mouth for communication, and that opening their mouths would results in floods, can be seen here, and is cited to "Rock Art of the Dreamtime" by Josephine Flood. I don't have access to that book, but it seems reasonable to assume that is the correct source for the statements in the Wikipedia article.

The absence of a mouth represents the idea that Wandjina are so powerful that they do not require speech. If a mouth was to appear on a Wandjina image, this would portend floods and cyclones. A band usually surrounds the head of the Wandjina with outward radiating lines, signifying the feathers that the Wandjinas wore and the lightning that they control.
Protected the Spiritual Beliefs of Indigenous Peoples - Australiam Case Studies by Michael Blakeney

They are generally thought of as bringers of rain, and in support of their open mouths causing rainfall, a Wunambal artistic ritual:

He notes that after repainting the artist "...fills his mouth with water and blows the water over the picture. This is done because the Wondschina in primeval times used to blow rain over the land in this way"
Wanjina: Notes on Some Iconic Ancestral Beings of the Northern Kimberly by Kim Ackerman

As I said before, though, there are plenty of other stories. So, a few examples:

"The Rainbow Serpent: A Chromatic Piece" relates an Ungarinyin story that their mouths were closed by a giant serpent called "Ungud":

Thus she [Ungud] had neither mouth nor ears when she came from the sea (1954: 108), she closed the mouths of the wondjina (1954: 107), and, after making the land rise from the sea, she traveled across it laying eggs that hatched into wondjina (1954: 101).
"The Rainbow Serpent: A Chromatic Piece" ed. Ira R. Buchler, Kenneth Maddock (Citations refer to Petri's "Sterbende Welt in Nordwest-Australien")

Another Ungarinyin source is shown giving a somewhat different explanation:

A Wanjina named Ralamara met another called Dadmanmuro near Djelariba. The former spoke Nyigina, and as the latter was going to say something, which Ralamara knew he was not going to like, he put his hand to Dadmanmuro's mouth and blocked it, and the defect has spread to all other Wandjinas.
Wanjina: Notes on Some Iconic Ancestral Beings of the Northern Kimberly by Kim Ackerman

Another claim is that Wandjina do have mouths, and when they speak, we hear thunder. But that the "artists who painted the Wandjinas could not draw a mouth because no mouth as depicted on the face could make the great sound of thunder".

And a number of other accounts have been collected as well. Take a look at Wanjina: Notes on Some Iconic Ancestral Beings of the Northern Kimberly section titled "Statements Regarding the Lack of a Mouth on Wanjina Images", on page 107, for some more example.

Another researcher, Lester Hiatt, makes a quite different postulation: That the wandjina may be an illustration of the male gentalia enclosed within a vagina:

It would be consistent with the description of Unggud as bisexual if the apparent facial configuration of the wonjina was meant to represent the male genitalia (testicles and penis) inside the vagina. The horizontal segmentation of the 'nose' would then be explicable as a differentiation of the glans from the shaft, and the absence of a mounth would no longer be a mystery.
"Arguments about Aborigines: Australia and the evolution of social anthropology" Lester Hiatt 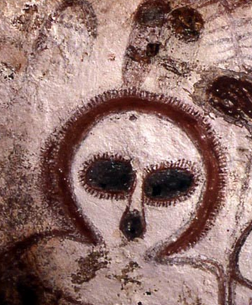 Not the answer you're looking for? Browse other questions tagged indigenous-australian wondjina or ask your own question.

23
How long ago was the Dreaming?
15
Why is the Serpent the most common motif as the creator in indigenous Australian cultures?
15
How did the Wondjina travel in the Dreamtime?
5
Why is the Loch Ness monster all the way from Scotland draw so many parallels with the Hawkesbury river monster?
9
Is there a relationship between the Dreamtime and dreaming?