Was Talos an intelligent machine?

I've been playing "The Talos Principle". In it, Talos is presented as a symbolic representation of an intelligent artificial being (a robot, if you're feeling less pretentious). The bronze giant from the Argonautica is certainly a reasonable symbol to choose for the themes of the game. However, is this representation, of an construct with human-like intelligence, accurate, with regards to the mythology?

I suppose I'm asking two questions in a sense:

The more popular version of the Talos story can be found in the Argonautica. In it, Talos was an automaton, a self operating machine. He was forged by Hephaistos and was tasked by Zeus to guard Europa's hideout in mount Dikti (in Crete):

And Talos, the man of bronze, as he broke off rocks from the hard cliff, stayed them from fastening hawsers to the shore, when they came to the roadstead of Dicte's haven. He was of the stock of bronze, of the men sprung from ash-trees, the last left among the sons of the gods; and the son of Cronos gave him to Europa to be the warder of Crete and to stride round the island thrice a day with his feet of bronze. Now in all the rest of his body and limbs was he fashioned of bronze and invulnerable; but beneath the sinew by his ankle was a blood-red vein; and this, with its issues of life and death, was covered by a thin skin. So the heroes, though outworn with toil, quickly backed their ship from the land in sore dismay.

Pseudo-Apollodorus' version differs a bit; Talos is tasked by king Minos to patrol Crete, and he might be shaped like a bull:

Putting to sea from there, they were hindered from touching at Crete by Talos. Some say that he was a man of the Brazen Race, others that he was given to Minos by Hephaestus; he was a brazen man, but some say that he was a bull. He had a single vein extending from his neck to his ankles, and a bronze nail was rammed home at the end of the vein. This Talos kept guard, running round the island thrice every day; wherefore, when he saw the Argo standing inshore, he pelted it as usual with stones. His death was brought about by the wiles of Medea, whether, as some say, she drove him mad by drugs, or, as others say, she promised to make him immortal and then drew out the nail, so that all the ichor gushed out and he died. But some say that Poeas shot him dead in the ankle.

Regardless of these differences Talos doesn't appear to be intelligent in either version. He is following instructions mechanically, similarly to Hephaistos' other automatons (e.g. the Khalkotauroi or the Cabeirian Horses).

As a sidenote, these coins from Phaistos tell us the Cretans thought Talos had wings. 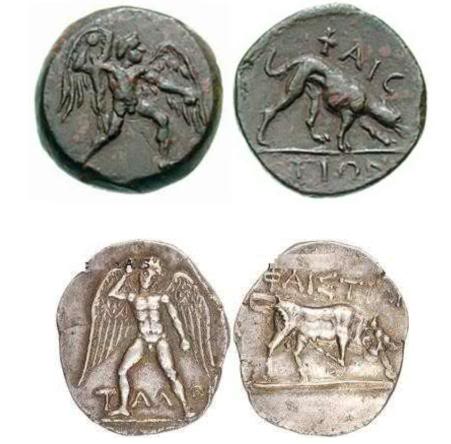 Unfortunately a tale of a flying Talos didn't survive.

No. The original myths are based more on ideas of "divine magic" as an explanation for the existence of various characters, rather than scientific logic as we know it today. So the explanation for Talos, to the ancient Greek reader, would have been that he was a bronze statue endowed by the gods with a living soul & they would have considered him a man, but with a body of bronze instead of flesh, & not a machine at all.

The idea of Talos as a machine, intelligent or otherwise, is a only modern one, influenced by modern scientific logic & inventions, as well as pop culture depictions of "robots", "cyborgs", etc.

17
How and why was Talos killed?

17
How and why was Talos killed?
6
Was Cadmus the only mortal whose wedding was attended by Olympians?
8
Why was Hephaestus's mule ithyphallic?
11
How invincible was Achilles really?
5
How rich was Croesus?
4
How long was the voyage of the Argonauts?
5
Was Orion, the huntsman, gay?
4
What was the oak branch of Dodona (within Argo) called?
5
What was the consensus on what the world was like around the time of the Titanomachy?
0
Was the Argo sentient and capable of conversation, or was its speech more like Siri or the USS Enterprise computer?