Are there any depictions of Horus being crucified and resurrected

In my internet adventures I've stumbled upon the idea that the story of Jesus was heavily inspired by the ancient Egyptian god Horus. See, for example, some positing it here—by its major modern proponent Acharya S—and here, a short clip by Bill Maher.

I've decided to do some fact checking, but there seems to be a massive amount of stuff written by various religious activists that appear in the top search results for the Horus keyword. Wikipedia also doesn't seem a great resource for such a controversial thing either. It seems like everyone's offended by this.

So, my questions are:

I know the history of Egypt gods spanned thousands of years, and that each god had their origin stories and statuses changing. But if this is present in at least one version of it, that's good enough for me.

I've heard this claim before and see no evidence for it in any Egyptian texts or iconography. Acharya S is unscholarly, makes many silly mistakes, and thus is unreliable; and Maher's people obviously got his bullet points from the Acharya piece to which you linked in your question.

Acharya throws up numerous points hoping that some of them will stick, but they don't. She doesn't cite any Egyptian texts that support her view, which is not surprising because there are none and, I would argue, there can be none. This is because the idea that Horus can be crucified and resurrected is logically precluded by Egypt's mythology and religious thinking. While a person is alive (taking the king as the example), he is Horus. But once you die, you become Osiris and are not Horus, so it can only be Osiris who is resurrected.

Not having any Egyptian texts to rely upon, Acharya relies on images of Horus with his arms out from his sides, and the idea that the Egyptian ankh and Christ's cross are the same. See this article: Was Horus "Crucified?" However, the ankh sign comes not from a cross but from a sandal strap (see Gardiner sign S34). In Egyptian, the ankh glyph is used to mean "life" as well as for the verb "to live," but it never is an agency of death; in Egypt no one ever dies on an ankh, much less is crucified on one. There are no such images in the iconography, since crucifixion was not practiced in ancient Egypt (at least before Roman times).

Further, a figure holding out his arms in itself says nothing about death or crucifixion, or a cross or Christ. Acharya's notion reminds me of Tertullian's laughable interpretation of Moses' surveying the Hebrews' (led by Joshua) battle against the Amalekites (Exod.17:8-13), where by standing on a hill and surveying the battle below, Moses (with help from Aaron and Hur) held his hands out to his sides and so caused the Hebrews to prevail. Tertullian claimed that this posture prefigured Christ and the cross, foretelling the cross through which Christ would be victorious over death and bring salvation. (Tertullian, Against Marcion, Book 3, Ch. 18.) No one would agree with such kinds of interpretations today. Yet Acharya relies on similarly ignorant/silly statements and wishful thinking by Church Fathers to support her claim.

In the past it has sometimes been claimed (e.g., by Wallis Budge, in his Legends of the Gods (1912), see this article; THE LEGEND OF THE DEATH AND RESURRECTION OF HORUS, AND OTHER MAGICAL TEXTS. (Among Egyptologists, Budge is no longer considered reliable)) that, in a myth recited on the Metternich Stela now on exhibit at the Metropolitan Museum in New York, the child Horus is stung by a scorpion (which is Seth's doing), dies from the poison, and is resurrected by Thoth. But I know of no modern reading/translation of this text that has him dying rather than just unconscious and on the brink of death. The Stela's text itself says that "the child was weak beyond answering," and "refused the jar [of drink]," which obviously means he is not dead. J.F. Borghouts, Ancient Egyptian Texts (1978), p. 63 (in lines 171-74 if the Stela). The scholarly discussions of the text accord with this interpretation. See Nora Scott, "The Metternich Stela," The Metropolitan Museum of Art Bulletin 9.8:201-17 (1951) (Horus is "unconscious" (p. 213); Scott was Research Fellow in the Egyptian Art Department at the Met); John Nunn, Ancient Egyptian Medicine, p. 110 (1996) (Horus is "unconscious"); Robert Ritner, The Mechanics of Ancient Egyptian Magical Practice, p. 57 n. 266 (1993) (Horus is "injured"); Geraldine Pinch, Magic in Ancient Egypt, pp. 144-45 (1994) (Horus is "too weak and ill to suckle" and has a "sickness"); Emily Teeter, Religion and Ritual in Ancient Egypt, p. 175 (2011) (Horus was was "cured" by Thoth, which does not seem like a raising from the dead). This interpretation makes sense in terms of the magical spells recited that invoked this myth to cure victims of snakebite, scorpion stings, etc., who are still alive; they are not being brought back from the dead. For this purpose, the recovery of Horus was being used as a parallel example, so it made sense that he too was only on the brink of death. It is like the Billy Crystal scene in The Princess Bride, where his character Miracle Max observes that Wesley is "only mostly dead," and then proceeds to bring him back.

So, to put it bluntly, the idea is a load of Horuss**t.

Short answer, no. There is no writing, inscription, artwork, statuary, or anything that indicates Horus (or Osiris) was crucified.

There is death and resurrection in Horus' story, though. The Metternich Stele relates the story of Horus dying by the sting of a scorpion. Budge has a nice summary:

THE LEGEND OF THE DEATH AND RESURRECTION OF HORUS, AND OTHER MAGICAL TEXTS.

Now soon after Isis had restored to life the son of the woman who had shown churlishness to her, a terrible calamity fell upon her, for her beloved son Horus was stung by a scorpion and died. The news of this event was conveyed to her by the gods, who cried out to her to come to see her son Horus, whom the terrible scorpion Uhat had killed. Isis, stabbed with pain at the news, as if a knife had been driven into her body, ran out distraught with grief. It seems that she had gone to perform a religious ceremony in honour of Osiris in a temple near Hetep-hemt, leaving her child carefully concealed in Sekhet-An. During her absence the scorpion Uhat, which had been sent by Set, forced its way into the biding-place of Horus, and there stung him to death. When Isis came and found the dead body, she burst forth in lamentations, the sound of which brought all the people from the neighbouring districts to her side.

Then he came to Isis and told her that no harm could possibly have happened to Horus, for he was under the protection of the Boat of Ra; but his words failed to comfort Isis, and though she acknowledged the greatness of his designs, she complained that they savoured of delay. "What is the good," she asks, "of all thy spells, and incantations, and magical formulae, and the great command of maa-kheru, if Horus is to perish by the poison of a scorpion, and to lie here in the arms of Death? Evil, evil is his destiny, for it hath entailed the deepest misery for him and death."

In answer to these words Thoth, turning to Isis and Nephthys, bade them to fear not, and to have no anxiety about Horus, "For," said he, "I have come from heaven to heal the child for his mother." He then pointed out that Horus was under protection as the Dweller in his Disk (Aten), the Great Dwarf, the Mighty Ram, the Great Hawk, the Holy Beetle, the Hidden Body, the Divine Bennu, etc., and proceeded to utter the great spell which restored Horus to life.

Thinking of Horus as a prefiguration of Jesus Christ is a clear-cut case of parallelomania (warning: PDF). Unfortunately, with "researchers" like Acharya S., sometimes the faint parallels (death and revival) become the overarching theme, hiding away any (especially major!) differences, and twists the rest of the narrative to fit. For example, this was not related to any divine soul-saving god, but rather to ancient Egyptian (religiously-based) medical practices. See Nunn 2002 Ancient Egyptian Medicine pp. 108–109.

No. Osiris resurrection is recounted in the texts (The Book of the Dead), Osiris was a Victor of Amentet, thus descended to the place of the dead, and ascended to Heavens. Horus was counted as one of the Enneadic powers (High Judges, or the Council of Seven, or Nine in some text), he was rather establishing co-rule with Pharaohs as avatars or the living Horus and had a more significant role than a soteriological figure. He was a protector of the body of Osiris, nevertheless. "Pagan Christs" is a relevant book (you can find it on internet archives), regarding comparative soteriology (Mithra, Christ, Baldr and others) 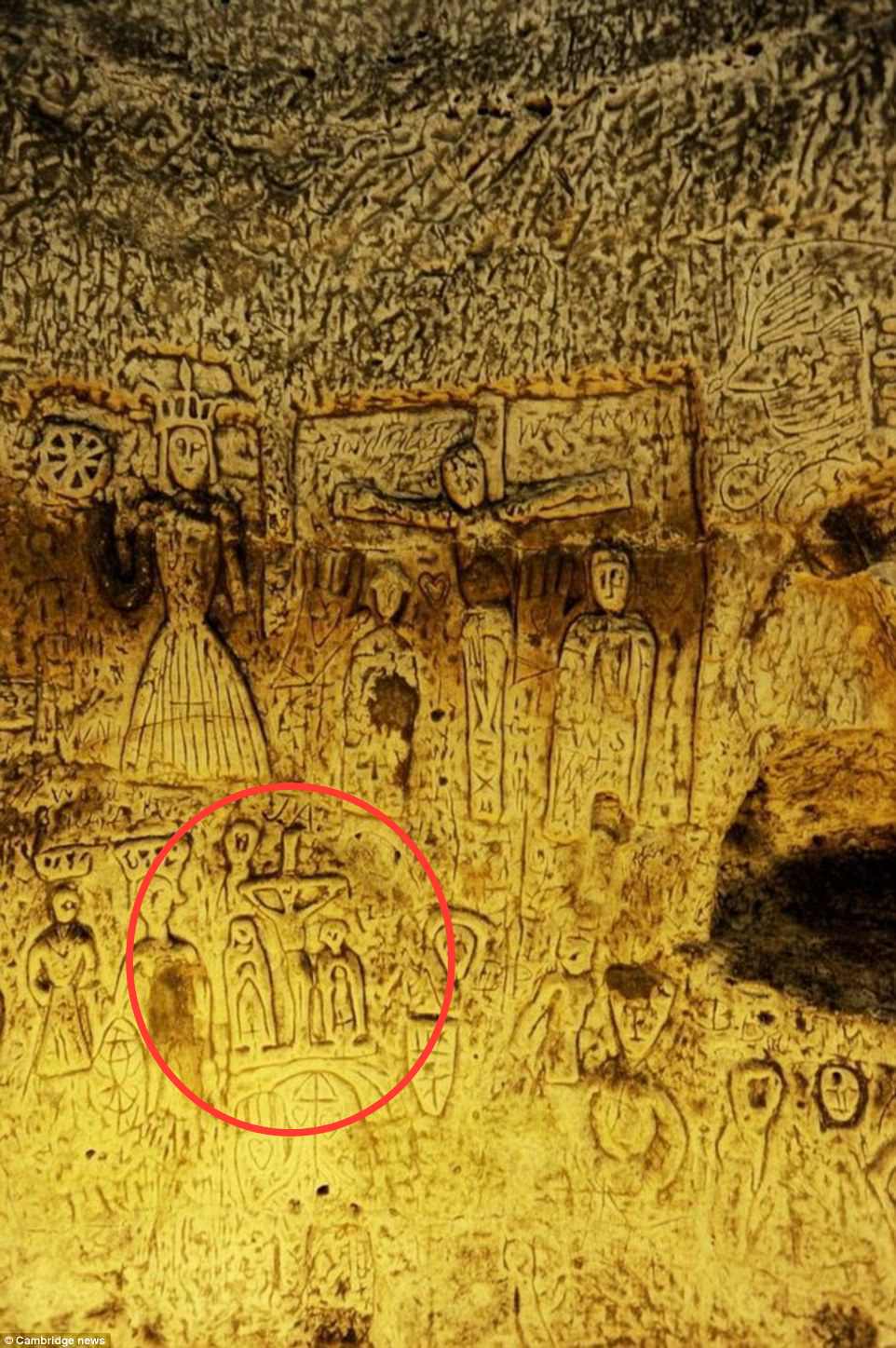 Here is an image from the carvings found in Royston Cave, in Hertfordshire England. These were made by the Knights Templar. I believe this figure below the main depiction of Jesus is Horus. Note the Egyptian figures standing beside the crucified man, the one on the left has an Egyptian cross in-between his arms. Was this the Templars way of showing that this famous story had come before?

SamSam
1
2
Add a comment  |
Highly active question. Earn 10 reputation (not counting the association bonus) in order to answer this question. The reputation requirement helps protect this question from spam and non-answer activity.

7
Are there any instances where the Egyptian gods are promiscuous?
8
How are Taweret and Nephthys related?
6
What is the difference between Ra and Horus?
6
Did ancient Egypt use the abbreviation IHS for "Isis, Horus, and Seb"?
6
Are there any common concepts in Egypt and Norse mythology / civilization?
0
Do any ancient sources describe Set as a mortal? And could Set be Sekhen?
3
Is there any source before the decipherment of hieroglyphic scripts that mentions that the ancient Egyptians deified their kings?