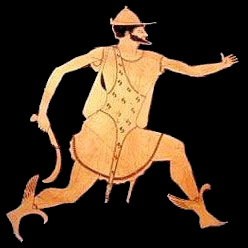 Not far from the building in the market-place of Argos is a mound of earth, in which they say lies the head of the Gorgon Medusa. I omit the miraculous, but give the rational parts of the story about her. After the death of her father, Phorcus, she reigned over those living around Lake Tritonis, going out hunting and leading the Libyans to battle. On one such occasion, when she was encamped with an army over against the forces of Perseus, who was followed by picked troops from the Peloponnesus, she was assassinated by night. Perseus, admiring her beauty even in death, cut off her head and carried it to show the Greeks.