What is the origin of the story that Santa Claus lives at the North Pole?

Can the traditional location of Santa Claus home and workshop be traced to older folklore stories, or is it a modern invention, a piece of fakelore?

Thomas Nast and the Northern side in the US Civil War

The idea that Father Christmas, Santa Claus, has a workshop at the North Pole may have originated with illustrator Thomas Nast, whose work was published in Harper's Weekly between 1863 and 1886 and in other publications including on Christmas cards.

In an introduction to a reprint of Nast's collected drawings first published in 1890, his grandson Thomas Nast St Hill states that "Santa's workshop at the North Pole was (...) a product of Nast's imagination". He goes on to say that "why Santa chose the North Pole as his base of operations has never been quite clear but the chances are that logistics had something to do with it. The North Pole was equidistant from most countries that Santa visited in the Northern Hemisphere". As further reasons, he writes that it would be difficult for inquisitive youngsters to spy on him there, and that as a resident of the North Pole he could not be claimed by any country as a national. He also reports that the reindeer and sleigh described by Clement Moore suggested a snowy environment.

This is quite an informative article in the New York Times.

It is probable that there was also a political reason for the choice of the North Pole. During the US Civil War of 1861-65, Nast made propaganda for the Northern (Union) side. Some of this featured Santa Claus, and Abraham Lincoln called Nast's use of Santa Claus "the best recruiting sergeant the North ever had". Santa was in a way being portrayed as a kind of spirit of the North.

The North Pole is of course the most Northern place in the world.

Meanwhile on the Southern (Confederate) side, the Richmond Examiner described Santa in negative terms as "a Dutch toy monger" who was a New England cleaning worker and a Hottentot who had nothing to do with traditional Virginian celebrations of Christmas.

One interesting source is Kevin Rawlings's article on Christmas during the civil war.

Well, it definitely doesn't claim to be folklore at all, it was just in a book by Thomas Nast. 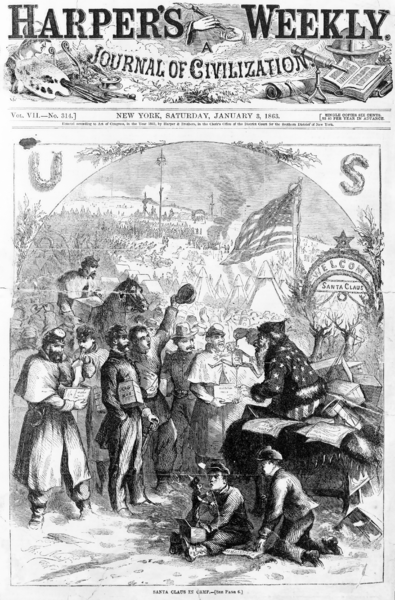 (Linked full size image is over 7 MiB; Wikimedia Commons page; image is in the public domain)

Another example related to Nast is by George P. Webster:

"His home through the long summer months, you must know,
Is near the North Pole, in the ice and the snow."

Nast drew the Illustrations for the poem, but the 1863 example remains the 1st.

Not the answer you're looking for? Browse other questions tagged origins traditions christmas modern-influence santa-claus or ask your own question.

6
What is the difference between folklore and fakelore?