Why is Lucifer three-faced?

In Canto XXXIV Lucifer is presented as a winged giant with three faces:

Oh, what a wonder it appeared to me
when I perceived three faces on his head.
The first, in front, was red in color.
Another two he had, each joined with this,
above the midpoint of each shoulder,
and all the three united at the crest.
The one on the right was a whitish yellow,
while the left-hand one was tinted like the people
living at the sources of the Nile.

Divina Commedia, edited by Giorgio Petrocchi and published by Mondadori

Why does Dante portray Lucifer as three-faced?

Why is the Devil also known as Lucifer (and other names) three-faced?

To understand this symbolic meaning of Dante in his Canto XXXIV, we have to have a basic understanding of the beliefs of the Catholic Church.

First of all, the devil was a murderer and the father of lies from the beginning.

Ye are of your father the devil, and the lusts of your father ye will do. He was a murderer from the beginning, and abode not in the truth, because there is no truth in him. When he speaketh a lie, he speaketh of his own: for he is a liar, and the father of it. - John 8:44

We have all heard of the expression about someone being two-faced:

not honest or sincere

Far worse is the Devil to Dante than someone simply two-faced, thus he imagines the Devil as having three faces.

Another aspect of this symbolic meaning is Lucifer's desire to be like God and to be worshiped as such. The God of Catholics is known as the Holy Trinity composed of the Father, Son and Holy Spirit, or "one God in three Divine Persons".

Whether you call him Satan, Lucifer, or Mephistopholes, he’s a beast with even more faces than he has names. Over the past five centuries, artists have variously depicted the devil as a fanged, horned demon; as an armored, Apollo-like army leader; and as a tailor of Nazi uniforms. - The Changing Face Of Satan, From 1500 To Today

An analysis of Canto XXXIV reveals a few tidbits of Dante's thinking in regards to Judas, Brutus, and Cassius:

One who betrays one’s benefactor comes closest to betraying God directly. Thus, the ultimate sinner, Judas Iscariot, was a man who betrayed both simultaneously, for his benefactor was Jesus Christ.

Since spiritual concerns must, in the end, outweigh temporal ones, Judas has committed the greater sin, and his head, rather than his legs, feels the constant chewing of Lucifer’s teeth. However, the fact that Brutus and Cassius suffer a punishment only slightly less harsh demonstrates Dante’s belief that church and state play equally important roles, each in its own sphere. Throughout Inferno, Dante has expressed the view that church and state should remain separate but equal. Now, Dante finds an arrangement for the final circle of Hell that both completes his vision of the moral hierarchy and makes one last, vivid assertion of his politics. Analysis: Canto XXXIV 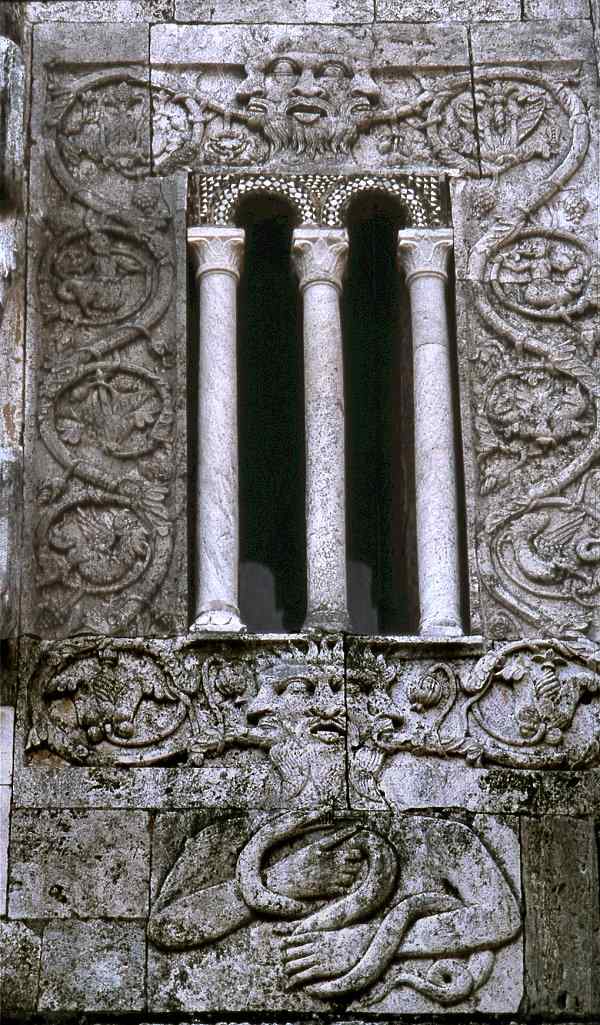 Satan tricephalos-tonguesticker, with fiery crown or hair, holding the Serpent, on the amazing 12th century façade at Tuscania (Viterbo).

It's worth looking further down Canto XXXIV (I'm using a slightly different translation) to see just who is stuffed into Lucifer's mouths:

"That upper spirit,
Who hath worst punishment," so spake my guide,
"Is Judas, he that hath his head within
And plies the feet without. Of th' other two,
Whose heads are under, from the murky jaw
Who hangs, is Brutus: lo! how he doth writhe
And speaks not. The other, Cassius, that appears
So large of limb. But night now reascends;
And it is time for parting. All is seen."

All three - Judas, Brutus, and Cassius - were remembered as betrayers. Judas betrayed Jesus to the Romans, leading to his death, while Brutus and Cassius were responsible for the assassination of Julius Caesar. As these annotations note, Dante was an admirer of the Roman Empire, and Caesar in particular (keep in mind that is guide is none other than Virgil!). The two men responsible for his death, then, would be deserving of such a fate.

Perhaps to emulate the old statue of the Goddess Hekate. The youth, the priestess, the wise crone. Before Virgin Mary with Vesica Pisces was placed on the crossroads all across Europe, Hekate was the Goddess of the Underworld and Crossroads. Dante Alighieri might have seen a similar statue amongst the ruins or in some private possession.

It is not uncommon in mythology and religion to have things in groups of three (father, son & holy ghost) as an example. It may stem from the Physical (body) mental (mind) and spirit (soul) concepts. A person was not thought of as just one but all three things to make up the individual come to be known as one. Lucifer or the devil is no different. You will find references of three in many religions. In some it may be three different gods. In others in may be one being who emanates in different ways. It is always a good idea to study the history of beliefs rather just on aspect because, many have their roots in other or previous beliefs.

Not the answer you're looking for? Browse other questions tagged christianity symbolism dante inferno divine-comedy or ask your own question.

29
Why did God prefer Abel's offering to Cain's?
6
Why is the staff of medicine symbolised by Hermes's staff, Caduceus?
9
What is the inspiration behind the dark forest in Dante?
5
Why are Dido and Cleopatra in the second circle of Hell?
4
Why is Dante using Geryon as a symbol of fraud?
9
Why is the left-hand path in regards to Baphomet associated with the female side?
4
Why was Nekhbet depicted as a vulture?
8
What is the significance of the three stars in Ruben's Saturn painting?
7
Why is Dante’s Odysseus different from Homer’s?