Were the grottoes of the Mitcham Fair in South London really connected with the veneration of St. James of Compostela?

In Mitcham in South London, children often used to build "grottoes" out of pebbles, pieces of broken pottery, candles, and sometimes shells, flowers, or pieces of mirror. They would ask for "a penny for the grotta" (the local pronunciation) and would spend the money they collected at the Mitcham Fair, known to date back to the early 18th century and which according to legend was first granted a charter by Queen Elizabeth I more than a century earlier. The building of grottoes continued until at least the 1980s.

It is speculated that there may be a strong connection with St. James, who is buried at the major pilgrimage site of Compostela in Galicia in Spain, and whose symbol is the shell, in particular the scallop shell found on the Galician shore.

But how much credence should we give to this notion, bearing in mind that shellfish were a common food in London and also that St. James's feast day is on 25 July whereas the fair itself was held on 12-14 August until 1924 and even today commences around 12 August each year? 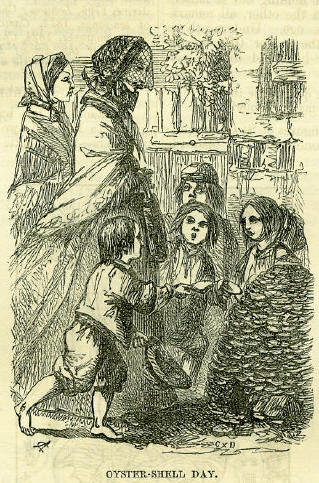 The calendar of liturgical feasts or celebrations may have different dates of celebration for a particular saint or mystery. These differences may be due either to a national, regional or other various liturgical "usages" which were permitted within the Roman Rite.

Prior to the 1550s, in England, there was in use the Sarum Rite (a variation of the Roman Rite).

Up until the early 1900s the Feast of St James was held on August 5. Today this is known as the Old St James' Day.

The adoption of the shell by the pilgrims to the shrine of St. James, is accounted for in a legend, which relates, that when the relics of the saint were being miraculously conveyed from Jerusalem to Spain, in a ship built of marble, the horse of a Portuguese knight, alarmed, we may presume, at so extraordinary a barge, plunged into the sea with its rider. The knight was rescued, and taken on board of the ship, when his clothes were found to be covered with scallop shells.

There is some folk lore connected with St. James's Day. They say in Herefordshire:

'Till St. James's Day is past and gone, There may be hops or they maybe none;'

implying the noted uncertainty of that local crop. Another proverb more general is —'Whoever eats oysters on St. James's Day, will never want money.' In point of fact, it is customary in London to begin eating oysters on St. James's Day, when they are necessarily somewhat dearer than afterwards; so we may presume that the saying is only meant as a jocular encouragement to a little piece of extravagance and self-indulgence.

In this connection of oysters with St. James's Day, we trace the ancient association of the apostle with pilgrims' shells. There is a custom in London which makes this relation more evident. In the course of the few days following upon the introduction of oysters for the season, the children of the humbler class employ themselves diligently in collecting the shells which have been cast out from taverns and fish-shops, and of these they make piles in various rude forms. By the time that old St. James's Day (the 5th of August) has come about, they have these little fabrics in nice order, with a candle stuck in the top, to be lighted at night. As you thread your way through some of the denser parts of the metropolis, you are apt to find a cone of shells, with its votive light, in the nook of some retired court, with a group of youngsters around it, some of whom will be sure to assail the stranger with a whining claim—Mind the grotto! by which is meant a demand for a penny wherewith professedly to keep up the candle. It cannot be doubted that we have here, at the distance of upwards of three hundred years from the Reformation, a relic of the habits of our Catholic ancestors. - Chambers' book of Days

The English faithful today are simply remembering their Old St James' Day, by celebrating its' small memorial in August, rather than in July and closer to the Feast of the Assumption (August 15).

It should also be noted that August 12 is the octave day of the Old St James' Feast Day, meaning that St James' Day (August 5) was at one time celebrated locally for eight days.

7
How are bears associated with the world of dreams?
7
What were the origins of the Santa Lucia processions in Sweden featuring candle-wearing Lucia and the cone-capped star boys?
7
When were “air quotes” first used?
4
Why do ghosts mess with electricity?
1
Are there myths that contains the concept that people with triple iris eyes are psychic or clairvoyant?
2
Were there any gods Floridian Tribes recognized?