How far does the classical model remain a template for heroism in the modern world?

Pretty much the question. I'm doing an essay right now on the social constructions of heroes, yet I don't really know how to go about this. My basic outline (so far) is this:

Any thoughts would be appreciated, I'm really stumped on this and looking for any suggestions/quotes/sources! Thank you all in advance :)

Well depending on the definition of classical hero, the answer may change. For the sake of this answer I'll consider them to be the protagonists of the Greek tragedies (Hercules, Odysseus, Hector, et.al.) or even some modern day heroes (Harry Potter, Katniss Everdeen, etc, spring to mind). Then you may be looking for what Joseph Campbell called the Monomyth.

In Campbell's opinion most stories of such nature followed a similar pattern, which he called the "Heroes Journey", this according to him was a trend that was observed in multiple works of fiction which was not restricted to the ancient era (nor to a particular region), and could be applied with minute changes to practically any age and hero. The cycle (simplified) is as follows - 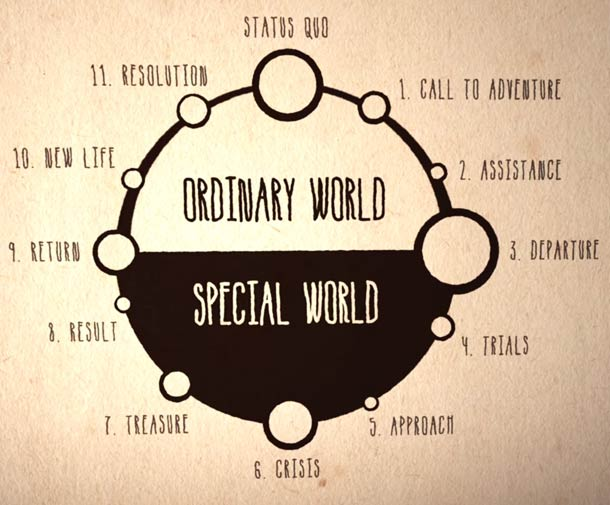 This pattern is actually found in a large number of fictitious works, and a number of parallels can actually be drawn with real life heroes as well. For instance using the example of Yuri Gagarin (as you mentioned).The Soviet Cosmonaut program was first announced (Call to Adventure). He was first selected for the Soviet cosmonaut program (Departure). This was then followed by an extremely rigorous mental and physical regimen which was designed to help the selected group (called the Sochi Six) survive the rigors of space flight a number of the candidates were then eliminated (Trials). He was finally selected as the man who'd be aboard the spacecraft Vostok 1 (Approach). The spacecraft then took off from the Baikonur Cosmodrone, the G-force experienced on take-off is extremely high, the pilot is often unable to move, staying conscious at such high levels is also a task in itself (Crisis). Being the first man in space is definitely a reward, isn't it? (Treasure). Return to the Earth (Return and Resolution). And finally the re-establishment of Status quo.

TedEd has a wonderful video on the same, which can be found here- https://ed.ted.com/lessons/what-makes-a-hero-matthew-winkler#watch

For a more detailed analysis you should read the book - "The Hero With a Thousand Faces" by Joseph Campbell.

Some brief thoughts, (answer may be evolving,) but I think the idea that "there is nothing new under the sun" sort of holds.

One innovation we think of as modern is that of the anti-hero, but this template could be said to go back to Prometheus and Loki, both protagonists who resort to trickery, and face dire punishment, to attain their goals. Odysseus can also be seen in this light, in that he presents a distinct contrast to figures like Achilles, big Ajax, Diomedes and so on. (Odysseus, for instance, is not as well regarded by the Greek dramatists because of his trickery--unlike Achilles, known for martial prowess and self-sacrifice, Odysseus is know for his wily scheming. Ajax's suicide at the dishonor of being deprived of fallen Achilles' armor is a direct result of Odysseus conniving. And yet, Odysseus is as famous as Achilles, and much loved as a character.) Oedipus can also be regarded as an anti-hero: killed his father, married his mother, blinded himself.

If we extend this to Euripidean heroines, we can include figures like Medea and Hecuba.

One innovation that could be regarded as modern is the Lawyer. While most television programs and films still focus on "gun heroes", the modern version of the martial hero, legal, political and courtroom dramas abound. These are heroes who use their intellect, as opposed to their physical prowess. But we can find a template in heroines such as Antigone. The importance of that Sophoclean drama cannot be overstated, as it forms a basis for the modern understanding of the distinction between the law and justice, and demonstrates the willingness of the hero to face mortal consequences in persisting in what is right.

It would not be going to far to say that the heroes of the Iliad and Odyssey are pale flames compared to Antigone in this regard. For another referent, one can look at Polyxena's shaming of the victorious Achaeans with her courage and heroism. So the seeds for undermining the stature of martial heroes is planted in 5th Century Athens.

This is another template that can be seen as modern, with novels like All Quiet On The Western Front, Gulag Archipelago, and films such as Boys Don't Cry. But even this extends back to Ancient Greece with Iphigenia, Polyxena and Hippolytus. These heroes, themselves blameless, expose the corruption of society.

12
How does the Genius concept fit into the Roman Mythology?