What do we know about Apollo Maleatas?

The sanctuary of Apollo Maleatas (Greek: Ἀπόλλων Μαλεάτας) is located on a low hill on Mount Kynortion, east of the sanctuary of Asklepios at Epidaurus. At the peak of the hill was a small Early Helladic settlement, which was never built on in later periods. At the beginning of the Late Bronze Age, an open-air altar was used where animals were sacrificed and votives deposited in the ash. Dedications include votive bronze double axes, bronze swords, and clay animal figurines. There is evidence for cult activity in the Geometric period.

Unfortunately, the article is very thin on details. What does Maleatas mean, and how did Apollo acquire the epithet? What was the god's connection to the Theatre at Epidaurus?

From the Name of a Place

In William Smith's Dictionary of Greek and Roman Mythology and Biography the name is spelled Maleates (Μαλεάτης), whose article entry goes on to tell us that it is

a surname of Apollo, derived from cape Malea, in the south of Laconia. He had sanctuaries under this name at Sparta and on mount Cynortium.

This article from the Dictionary references a couple of passages mentioning the deity in Pausanias' Description of Greece. In 3.12.8, Pausanias does indeed render the name as Μαλεάτης, saying:

The Lakedaimonians have an altar of Apollon Akritas, and a sanctuary, surnamed Gasepton, of Ge. Above it is set up Apollon Maleates.

The cape referred to in the Dictionary is called Cape Maleas on Wikipedia, which it derives from Ακρωτήριον Μαλέας (Akrotêrion Maléas), "a peninsula and cape in the southeast of the Peloponnese in Greece." The Wikipedia article adds that:

It separates the Laconian Gulf in the west from the Aegean Sea in the east. It is the second most southerly point of mainland Greece (after Cape Matapan) and once featured one of the largest light-houses in the Mediterranean. The seas around the cape are notoriously treacherous and difficult to navigate, featuring variable weather and occasionally very powerful storms. 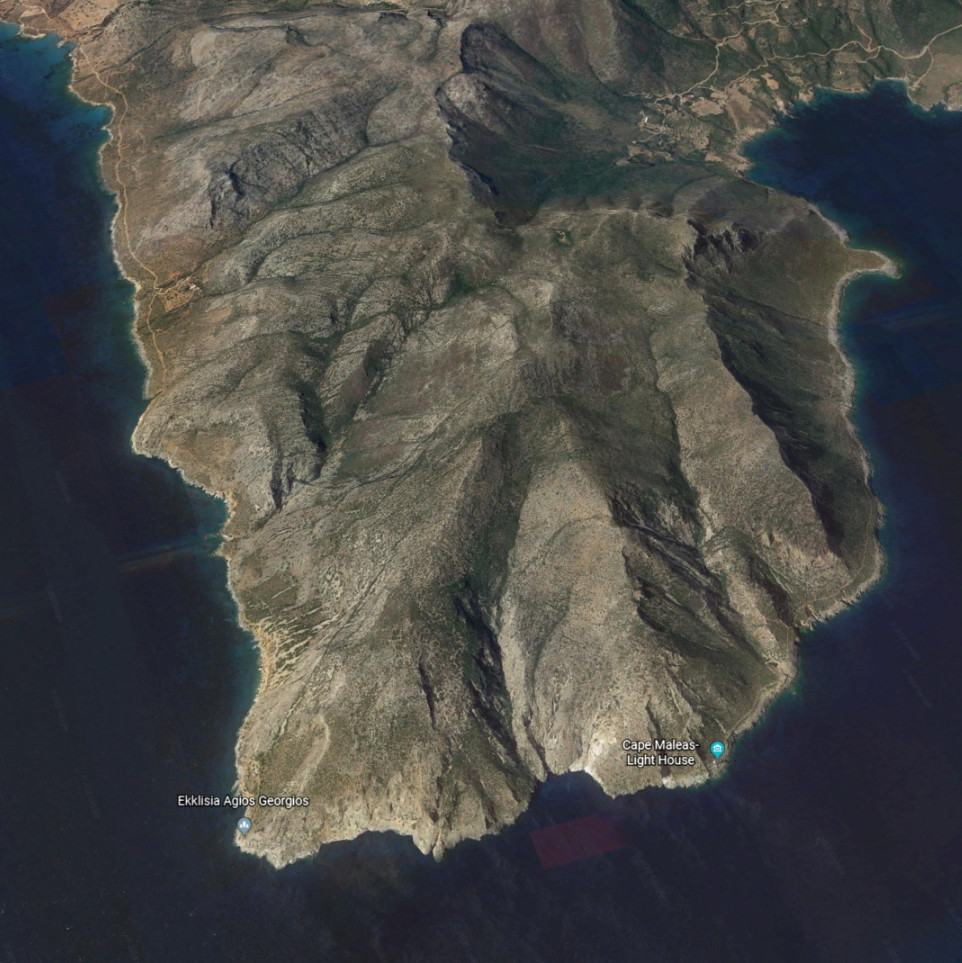 In the Odyssey (Book 9), it is while he sails westwards trying to round this cape, close to the final leg of his voyage to return home from Troy, that Odysseus first gets blown off course to begin his years of marine misadventure in earnest. 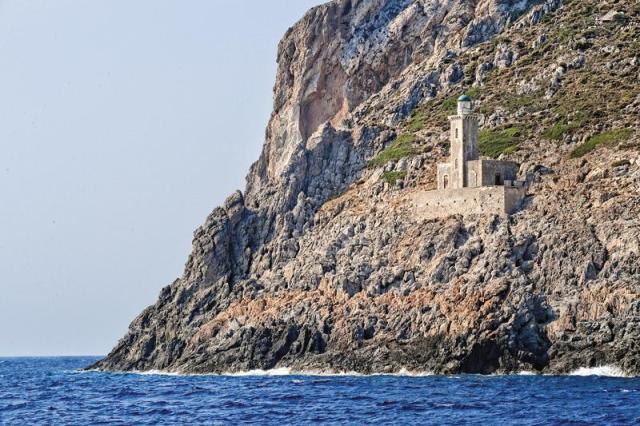 The light-house mentioned in the Wikipedia article

According to the 10th chapter, "Unpublished Ephebic List in the Benakeion Museum of Kalamata", written (2009) by Andronike Makres in Greek History and Epigraphy: Essays in Honour of P.J. Rhodes:

Several dedications referring to the sanctuary of 'Apollo Maleatas and Asklepios' have been found from at least as early as the third century BC, which show that the sanctuary housed what was in fact a common cult of Apollo and his son Asklepios and that Apollo received the sacrificial offering first.

Or Rather From the Name of a Guy

An alternate etymology derives this epithet of Apollo from Malos, a maternal ancestor of Asklepios.

In the 2nd chapter, entitled "Gods of (Con)fusion: Athena Alea, Apollo Maleatas and Athena Aphaia", of Volume 64 of Classica et Mediaevalia, the Danish Journal of Philology and History (2013), regarding the Epidauros [Epidaurus] sanctuary of Apollon Maleates, Jeremy McInerney says on pp. 60-64:

The cult of the Maleatas sanctuary was... of great antiquity, and continued through the Archaic and Classical periods. The precise identity of the original recipient of the cult is, however, much harder to establish with certainty. Towards the end of the 4th century BC the Epidaurian poet Isyllos composed a paian to Asklepios, in which he referred to the god who shared Asklepios' honours:

Malos was the first to build the altar of Apollo Maleatas
And made the sanctuary splendid with sacrifices.
Isyll., Coll. Alex. pp. 132-3, 27-28, tr. Bremmer

He goes on to recount the genealogy of Asklepios, born to the union of Apollo and Koronis, the granddaughter of Malos. Isyllos does not offer any further information about the epiklesis Maleatas, but the occurrence of Malos in the same line suggests that Isyllos derived the god's name from the family of his worshippers...

The evidence prior to Isyllos' paian, however, suggests a more complex history. When Asklepios was welcomed at Athens from Epidauros c. 421 BC regulations regarding his cult stipulated separate offerings to Maleatas, to Apollo and to Hermes (as well as certain other minor deities). In the eyes of the Athenians, then, Maleatas and Apollo were two distinct gods, Maleatas was not an epiklesis of Apollo, and hence there was no need to postulate a human eponym to explain the god's name. Yet, around the same time in Lakonia the Spartans were making dedications both to Apollo and Maleatas separately and to Apollo Maleatas as a single deity... Near Kosmas in the southern Kynouria, games appear to have been held in his honour at a festival called the Maleateia. Hence the relationship between Apollo and Maleatas is complicated. At times they appear separate, and at other times they appear to be a single, syncretized figure.

It may be worth exploring the geographical associations behind the name in order to elucidate the god's identity. The name Maleatas derives from Cape Malea, the eastern-most peninsula of the Peloponnese. The original deity was simply the local version of the youthful Archer god: Apollo of Cape Malea. At some point the local god was distinct from Apollo... It is hard to say when the fusion of the two took place, but the extension of the god's reach from the eastern side of Lakonia to the eastern side of the Peloponnese fit well with Sparta's assertion of a claim to Kynouria, the contested borderland between Lakonia and Argos. Here Apollo Maleatas was pressed into service... Apollo Maleatas represents, in this instance, less a fusion of local and panhellenic cults so much as a pure expression of territorial hegemony.

At Epidauros, however, the relationship of Apollo and Maleatas was quite different. When Apollo Maleatas makes his first appearance at Epidauros, in the paian of Isyllos, the entire focus of the poem is on creating a genealogy for Asklepios rooted in the soil of Epidauros:

[T]his is the tradition which reached the ears of our forefathers, o Phoibos Apollo: it says that Zeus gave the Muse Erato to Malos as his wife in holy matrimony. Now Phlegyas, whose native city was Epidauros, married Malos' daughter whom Erato, her mother bore, and Kleophema was her name. Phlegyas fathered Aigla, that was her name; she was also called Koronis because of her beauty. Now Phoibos of the golden bow saw her in Malos' house and put an end to the season of her virginity.
Isyll., Coll. Alex. pp.132-136. 37-49 tr. Bremmer

From the union of Phoibos and Koronis was born Asklepios.

It is noticeable that Apollo is addressed as Phoibos, the god of the paian. The name Maleatas drops out, and the only vestige of his presence is in the references to a human progenitor of the divine dynasty, Malos. Nor is any explicit connection made with the Lakonian Apollo Maleatas. In fact, given Malos' importance to the human side of the family tree of Asklepios, since he is the earliest male progenitor of the female line, it seems that, for Isyllos, Apollo Maleatas signified not the fusion of Apollo and Maleatas, nor specifically a Lakonian god, but simply Apollo as honoured by the family of Malos...

... How in fact the Lakonian god Apollo Maleatas became associated with the venerable cult on Mt Kynortion is unclear, although it is not impossible that in identifying Apollo as Maleatas the Epidaurians were making overtures to Sparta at the expense of their nearer neighbour, Argos.

There seems to be no especially noteworthy connection between Maleates/Maleatas and the Epidauros Theatre beyond the fact that the god's sanctuary appears to be the nearest major man-made structure to the theatre, less than half an hour away on foot (at least on current modern roads, depending on which route one takes, according to GoogleMaps). 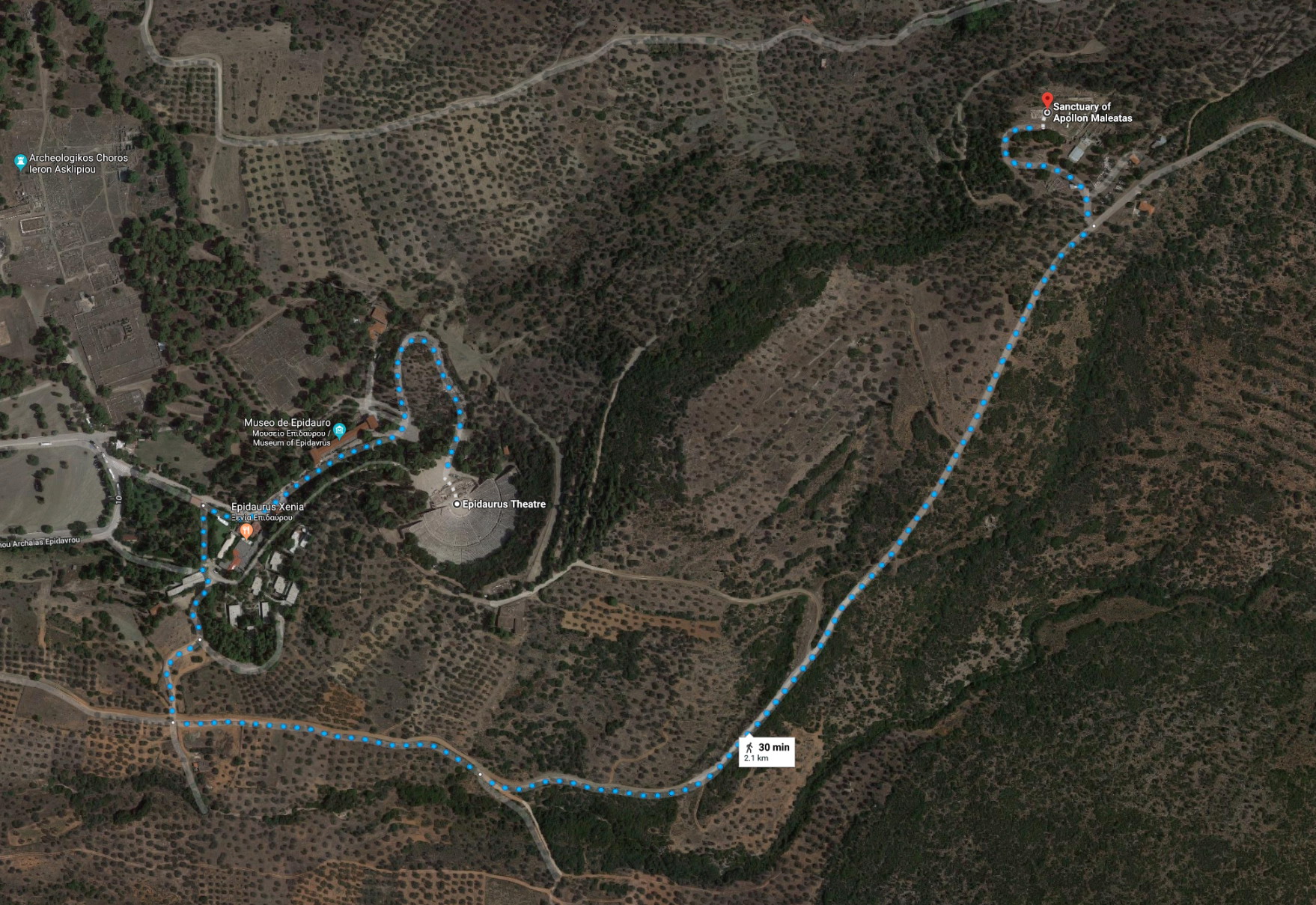 Not the answer you're looking for? Browse other questions tagged greek apollo or ask your own question.

14
What exactly did Apollo do with respect to the Sun?
8
What did Sisyphus know and when did he know it?
6
Which one was older, Artemis or Apollo?
4
Was Apollo the exact same in Greek and Roman mythology?
4
What are the main differences of the Orphic theogonies?
5
What do we know about the winged male figures representing the souls of warriors in the weighing of souls?
2
What does Hesiod mean by “babies will be born with gray hair” in the Iron Age?
6
Why did Apollo trick Artemis into killing Orion?
4
Is there an ancient basis for the Cretan bull-headed sea serpent god in Mika Waltari's The Egyptian?