What mythological figures have died for love?

Ask Question
Asked 2 years, 10 months ago
Active 2 years, 8 months ago
Viewed 1k times
4
This question's answers are a community effort. Edit existing answers to improve this post. It is not currently accepting new answers or interactions.

I was recently thinking about Orpheus, and different accounts of his death, and although they tend to vary, the versions that strike me as most compelling are those in which the loss of Eurydice may be the underlying cause.

There is a version in which Zeus strikes him down for impiety, "being struck by a thunderbolt, hurled at him by the god because he revealed sayings in the mysteries to men who had not heard them before." [Pausanias, 9.30.5]. But the historian also suggests that it was at the hands of the Thracian women, who "plotted his death, because he had persuaded their husbands to accompany him in his wanderings."

This second version is closer to his death at the hands of maenads for impiety towards Dionysus, in renouncing worship of any god but Apollo.

Ovid, the great love poet, extends the theme, noting that:

"Orpheus still believed his love-pledge was forever. So he kept away from women, though so many grieved because he took no notice of their love," for "he was the first of the Thracian people to transfer his love to young boys, and enjoy their brief springtime and early flowering, this side of manhood." But "One of those women, as her tangled hair was tossed upon the light breeze shouted, 'See! Here is the poet who has scorned our love!' Then hurled her spear at great Apollo's bard."
[Metamorphoses X.80; More; Kline; id. XI]

Although at first no object will strike the singer, the clamor of the womens' voices eventually drowns out his song, and he is struck down and torn to pieces.

His head thrown into the river, and so great is his grief, it never ceases in lamenting. Orpheus, over love for Eurydice, rejects the love of all other women, and for this he meets his tragic end.

The legendary Carthaginian Queen Dido kills herself in despair after her lover Aeneas, son of Aphrodite, abandons her. 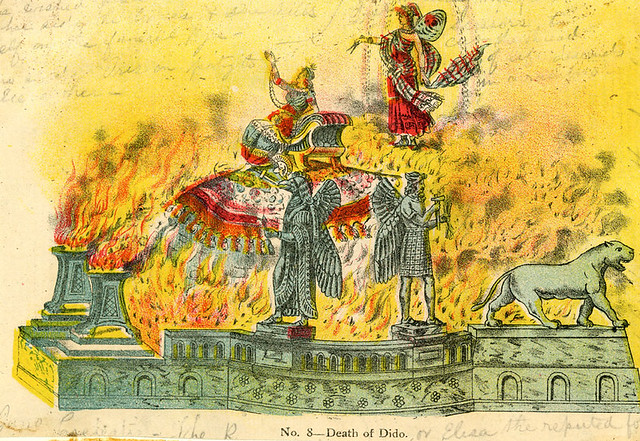 Joseph Campbell wrote about these two, emphasizing the unification of divine and romantic love (he calls it "Roma" vs. "Amor", Roma referencing the seat of the Catholic church in Rome.) The legend provides the template for Romeo & Juliet, the background for Malory's Le Morte d'Arthur, and is the subject of one of Wagner's operas, quoted in The Wasteland.

Tristan was now too weak to keep his watch from the cliff of the Penmarks, and for many long days, within walls, far from the shore, he had mourned for Iseult because she did not come. Dolorous and alone, he mourned and sighed in restlessness: he was near death from desire.

At last the wind freshened and the white sail showed. Then it was that [Tristan's wife] took her vengeance [telling him his lover would not come to heal him]. And Tristan turned him to the wall, and said: “I cannot keep this life of mine any longer.” He said three times: “Iseult, my friend.” And in saying it the fourth time, he died.
...
Iseult came in and said [to her]: “Lady, rise and let me come by him; I have more right to mourn him than have you—believe me. I loved him more.”

And when [Iseult] had turned to the east and prayed God, she moved the body a little and lay down by the dead man, beside her friend. She kissed his mouth and his face, and clasped him closely; and so gave up her soul, and died beside him of grief for her lover.

After their deaths, a rose briar grows up above their tombs, entwining, as a symbol of their immortal love. This incredibly influential legend is believed itself to have been influenced by Pyramus and Thisbe.

In Metamorphoses IV. 55-166 you will find the story of Pyramus and Thisbe, an early example of star-crossed lovers. A brief summary of the plot, from Wikipedia:

In Ovid's Metamorphoses, Pyramus and Thisbe are two lovers in the city of Babylon who occupy connected houses/walls, forbidden by their parents to be wed, because of their parents' rivalry. Through a crack in one of the walls, they whisper their love for each other. They arrange to meet near Ninus' tomb under a mulberry tree and state their feelings for each other. Thisbe arrives first, but upon seeing a lioness with a mouth bloody from a recent kill, she flees, leaving behind her veil. When Pyramus arrives he is horrified at the sight of Thisbe's veil in which the lioness had torn and left traces of blood behind, as well as its tracks. Assuming that a wild beast has killed her, Pyramus kills himself, falling on his sword, a typical Babylonian way to commit suicide, and in turn splashing blood on the white mulberry leaves. Pyramus' blood stains the white mulberry fruits, turning them dark. Thisbe returns, eager to tell Pyramus what had happened to her, but she finds Pyramus' dead body under the shade of the mulberry tree. Thisbe, after a brief period of mourning, stabs herself with the same sword. In the end, the gods listen to Thisbe's lament, and forever change the colour of the mulberry fruits into the stained colour to honour the forbidden love.

A brief summary of the story from Britannica:

Hero and Leander, two lovers celebrated in Greek legend. Hero, virgin priestess of Aphrodite at Sestos, was seen at a festival by Leander of Abydos; they fell in love, and he swam the Hellespont at night to visit her, guided by a light from her tower. One stormy night the light was extinguished, and Leander was drowned; Hero, seeing his body, drowned herself likewise.

The story is preserved in Musaeus, Ovid, and elsewhere. It was also adapted by later poets, such as Christopher Marlowe (Hero and Leander), and alluded to by Lord Byron (The Bride of Abydos).

The Editors of Encyclopaedia Britannica. Hero and Leander. Encyclopædia Britannica. Retrieved May 07, 2019, from https://www.britannica.com/topic/Hero-Greek-mythology

The love of Phaedra for Hippolytus is unrequited, but it ends in death(s) too:

Though married to Theseus, Phaedra fell in love with Hippolytus, Theseus's son by another woman (born to either Hippolyta, queen of the Amazons, or Antiope, her sister). Hippolytus rejected her.

In revenge, Phaedra wrote Theseus a letter that claimed Hippolytus had raped her. Theseus believed her and cursed Hippolytus with one of the three curses he had received from Poseidon. As a result, Hippolytus's horses were frightened by a sea monster and dragged their rider to his death.

In another version, after Phaedra told Theseus that Hippolytus had raped her, Theseus killed his son, and Phaedra then committed suicide out of guilt, for she had not intended Hippolytus to die. Artemis later told Theseus the truth.

Oenone was a mountain nymph and the wife of Paris, until the Trojan prince abandoned her for Helen. After the fall of Troy the once lovers met again:

Mortally wounded by Philoctetes' arrow, he begged Oenone to heal him with her herbal arts, but she refused and cast him out with scorn, to return to Helen's bed, and Paris died on the lower slopes of Ida. Then, overcome with remorse, Oenone, the one whole-hearted mourner of Paris, threw herself onto his burning funeral pyre, which the shepherds had raised. A fragment of Bacchylides suggests that she threw herself off a cliff, in Bibliotheke it is noted "when she found him dead she hanged herself," and Lycophron imagined her hurtling head first from the towering walls of Troy. Her tragic story makes one of the Love Romances of Parthenius of Nicaea.

Not the answer you're looking for? Browse other questions tagged comparative love or ask your own question.

5
What are some mythological examples of emotionally-charged symbolic acts of grief?

8
What cultures have myths related to the origin of aurora phenomena?
5
What would be an efficient data structure for cataloging deities?
6
Are there any love stories in Greek myth that don't have one or both dying?
5
What are some mythological examples of emotionally-charged symbolic acts of grief?